This is another post filed under "and other ephemera", so consider yourself warned if you're looking for a lot of movie-related content. I haven't been to a theater since November 18, which might as well be considered a fast considering it's easily the longest movie-free stretch I've had all year. (If one wants to get all technical, which my brothers would surely insist upon doing, I have seen snatches of the DVDs playing on the team bus, although I've ignored most of those choices except for getting pulled into NAPOLEON DYNAMITE occasionally.)

Yesterday was a long day on the road from Memphis to Lexington. The experience must be akin to being on tour. When I arrive home, I'll have spent seven consecutive nights in seven different cities that span five states.

I've been surprised that all five hotels have provided free high-speed internet connections. Except for the one in Memphis, all of them have been wireless too. I suppose it's a necessity these days if you want to attract customers.

I don't travel a lot, but one thing I've noticed from these stays is that the size of the rooms are inversely proportional to the size of the cities. For instance, my room in Memphis was, at best, half the size of my room in Sulphur Springs, Texas. Biggest city, smallest accommodations. It makes sense, but I'd never given it any thought.

It's always nice to meet people you "know" but have never actually met--people you converse with in discussion groups but might not recognize if they were sitting next to you--and I had the good fortune to do that on Monday. Noel Murray and Donna Bowman are Arkansas-based critics. Both write for the Nashville Scene, and Noel's work can also be found in The Onion's AV Club. They were gracious enough to take me to dinner at a local Mexican place, a nice change of pace from a travel diet mostly consisting of fast food and continental breakfasts. The time we had was too short--I needed to get to Hendrix College to do the radio broadcast of Otterbein's basketball game--but it was my pleasure getting to meet them.

The last game is tonight at Transylvania University. If you must know, I probably won't be able to resist making at least one vampire joke. All this time away has probably been a good purging of all the cinema I've absorbed during 2005, making room for the onslaught that December brings. This year I'm receiving a fair number of "for your consideration" screeners, which are on top of the regular crop of theatrical moviegoing, so a break is good for hunkering down to make it through awards season.

Surprise, I'm not dead, although my virtual disappearance from this space might have led some to think so. I've been on the road for a little more than a week and only now have gathered the time to make some much-needed updates here.

I flew into Dallas-Fort Worth early in the morning on November 20 and was there with family until the day after Thanksgiving. Then I drove to Georgetown, Texas to handle sports information duties and broadcast two basketball games. Being so close to Austin--about 30 miles north--I had to venture into the city on my one night there.

Actually, a more apt description is around the city. The highway system in Texas can be confusing, what with roads seemingly having two or three names yet displaying little signage. My AAA directions didn't quite make the cut when it came to getting me everywhere I needed to be, but I'm not too proud to stop and ask at gas stations if I think I'm lost. (I was off course a couple times. Good job Austin-area gas station attendants knowing how to get me back on track.)

My destination was a Kelly Willis concert at One World Theatre. The unique venue is styled like a Tuscan villa and tucked into the hills of west Austin. The performance area is on the top floor. It's a terrific, intimate space to see live music. Kelly was playing two concerts, an impressive feat considering that she is in the latter stages of pregnancy. I caught the "late" (9:30 p.m.) concert, which will be her last performance until she gives birth. (That sentence sounds kind of strange, but I can't think of any other way to put it, unintended humor notwithstanding.)

I've seen her play live many times but never in her hometown. The concert wasn't significantly different, although the local audience, more accustomed to seeing her, seemed more respectful--in other words, not yelling out requests--than midwestern and eastern concertgoers who may get to see her every two years. The one bonus in seeing Kelly play in Austin is that her husband, Bruce Robison, came out and did a mini-set with her and the band. The country couple have regularly done holiday shows--not this year for obvious reasons--and stirred up a little of the seasonal spirit with a few wintry, Christmastime songs, including a playful "Baby, It's Cold Outside". (As Kelly remarked afterwards, the song works better if you don't think about her being pregnant.)

A One World Theatre usher offered up easier directions to get me back to my hotel, although she qualified such a route as "the long way". Was it ever. I stopped at a 7-11 on Highway 620 about two blocks before the I-35 ramp because I thought I must have missed something. In retrospect, it's a good thing I checked because I didn't see any signs indicating freeway entrance ramps.

After the game on Saturday night, I hopped on the bus with the team and rode to an overnight stay in Sulphur Springs, Texas. We arrived around 2:00 a.m. and had to stand outside while the front desk clerk verified that we were who we claimed to be. I'm assuming it's a necessary safety measure, albeit an irritating one for guests trying to check in. As I've found in my travels, you pay less in the boondocks and get nicer rooms. I had a suite, which was unnecessary since I'd be sleeping for six or seven hours and then leaving. I'm exaggerating when I call it the loneliest hotel room in the world, but considering the hinterland location and the closed restaurant next to the inn (apparently the former location of the adjacent new restaurant), it seemed like the sort of place one might go if running from the law but end up getting shot. Like I said, I'm exaggerating. It would have had to be much, much dingier--this place wasn't dingy at all--and smaller, so indulge my fantasy. Blame it on seeing too many movies.

The trip then led me to Conway, Arkansas, where I sit writing this in the lobby of a Super 8 while the team has practice. I found one of the NFL telecasts to catch up on the day's action and was treated to regular interruptions for updates about the tornado warnings for the area. With my exquisite view of the highway and the foreboding sky, I could see that the weathermen weren't fooling around. It rained cats and dogs. A twister touched down somewhere in these parts, although not especially close to where I am.

I have a raft of reviews to post when I get the chance, and since I know an empty day awaits me in Lexington, they'll probably get here sooner than later. I'll also have some photos to illustrate this entry when I return home.
Posted by Mark Pfeiffer at 11/28/2005 12:09:00 PM No comments:

Kelly Willis in concert at The Ark 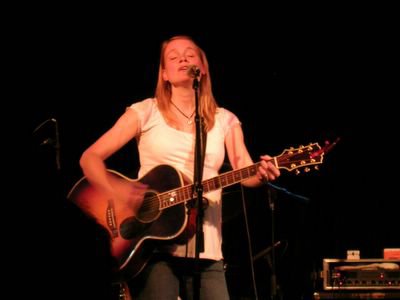 More comments to come, but for now here are some photos and the setlist... 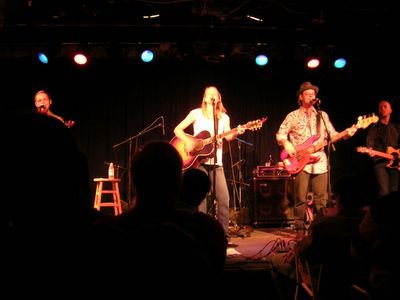 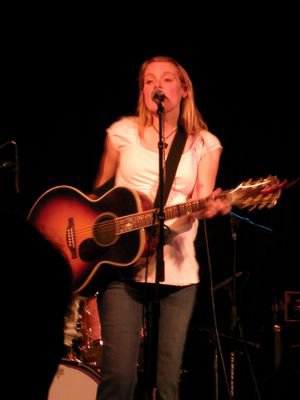 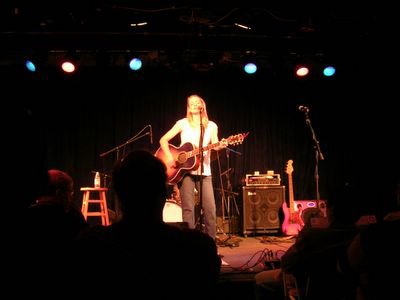