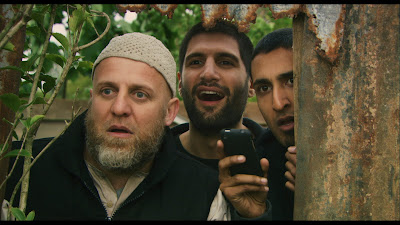 Comedies don’t get any nervier than director Chris Morris’s FOUR LIONS, which is built on the exploits of bumbling Islamic terrorists in a cell near London. By all appearances the group’s levelheaded leader Omar (Riz Ahmed) wouldn’t be involved with such a bunch. He has a comfortable middle class life with a loving wife and admiring son, yet there he is telling a bedtime story attempting to recast THE LION KING as a tale of jihad and groaning over the numerous outtakes from videos supposed to present them as fearsome ideological warriors.

Omar and the easily malleable Waj (Kayvan Novak) depart England for a training camp in Pakistan, but they make a hasty return home after demonstrating their ineptitude with artillery. During their absence, Barry (Nigel Lindsay), a blowhard incapable of keeping a low profile, meets a kindred spirit in Hassan (Arsher Ali), who tries to make a point about prejudice toward Muslims by pretending to be strapped with explosives at an Islamic relations panel. Barry invites Hassan to join him and the sheepish Fessal (Adeel Akhtar) in plotting some kind of attack.

The desire to put belief into action becomes more urgent when Omar and Waj reconnect with the others. They just need to determine the proper target, and no, it won’t be the mosque, no matter how much Barry insists that blowing it up will inflame their spiritual brothers to fight the heathens. 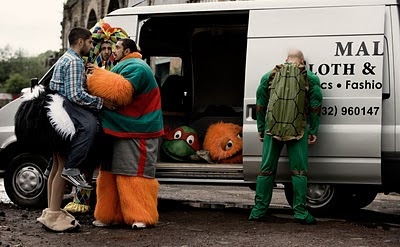 FOUR LIONS is merciless in its mission to find humor where few would dare seek it. Morris and co-writers Jesse Armstrong, Sam Bain, and Simon Blackwell present these modern boogeymen as buffoons and hold them up to ridicule for their vanity and tortured logic. The film’s point is neatly summarized in the scene with Omar contorting himself to convince his confused accomplice Waj that killing innocent civilians and themselves to promote their cause is a good thing that he wants to do. From an outside perspective, such talk would sound clearly insane, and it’s not simply because individual bombers in the group are dressed as a Teenage Mutant Ninja Turtle and a guy riding an ostrich. In letting the characters accept such philosophical views as wise and noble, Morris and company highlight the absurdity of these positions to devastating comedic ends.

It may not seem very risky for the filmmakers to take potshots at terrorists. Who’s going to object? In FOUR LIONS the courage comes in putting front and center the disquieting notion that terrorism is as simple as any group of fools with the ability and desire to assemble and detonate rudimentary bombs. It’s easy enough to find the hilarity in those who would do us harm hurting themselves. It’s something quite different to be reminded that militaries and intelligence agencies aren’t necessarily fighting brilliant or deeply pocketed opponents. FOUR LIONS allows the audience to laugh at these dimwits, which has enormous cathartic power, yet in not sparing the deadly consequences of their beliefs and actions, the film adds an extra layer of resonance regarding what’s at stake in this clash of worldviews.

Boldness in and of itself in a comedy doesn’t mean the material is actually humorous; however, FOUR LIONS is packed with razor-sharp wordplay and glorious slapstick that make it an explosively funny and unsettling film. 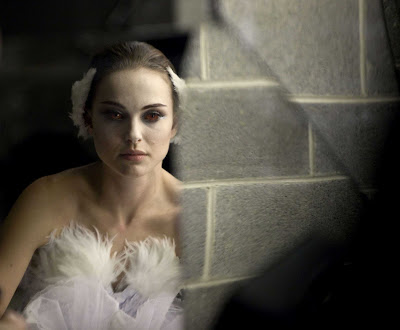 BLACK SWAN ballerina Nina Sayers (Natalie Portman) finally gets her shot at being a star, but the pressures may be more than she can handle. Nina comes off as quiet and unassuming, which makes her ideal for the virginal white swan in a new production of SWAN LAKE, but the director (Vincent Cassel) has doubts that she can also embody the bold and lusty black swan, qualities that she must show if she is to play the Swan Queen.

To claim the leading role, Nina takes actions that surprise the director and herself, which may be the first signs that she’s losing her mind. The paranoia increases when Nina suspects that Lily (Mila Kunis), the newest dancer in the company, is angling for her treasured lead role.

BLACK SWAN merges the sexual hysteria of Roman Polanski’s REPULSION with the ballet drama of Powell and Pressburger’s THE RED SHOES and throws in a generous dollop of Cronenberg-like body horror for good measure. Director Darren Aronofsky’s lurid mixture of high and low art makes for an often intoxicating film about creative risk and personal development.

At the center of it is Portman delivering a tour de force performance that conveys BLACK SWAN’S dualities. The tiny actress looks the part of a fragile dancer, like one that could adorn the top of a music box. She’s every bit mommy’s little girl, from having her mother (Barbara Hershey) undress her and clip her nails to inhabiting a child-like bedroom in her parent’s apartment. Nina acts and is treated like a pretty little princess. Portman wears this sheltered quality as though it is a comfortable straitjacket.

When Nina’s shadow self thrashes to escape this coddled existence, Portman’s transformative acting is thrilling in how it manifests the psychosis. Delicate technical precision and emotional control gives way to bold, forceful expressions, particularly in the SWAN LAKE scenes that conclude the film on a dizzying high. Aronofsky is completely serious about the fever dream that is BLACK SWAN, which is how he’s able to pull off material that is inherently unserious. 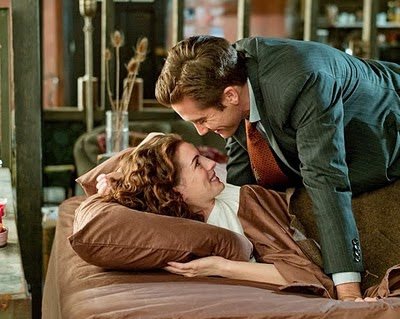 LOVE & OTHER DRUGS opens in 1996 with charismatic electronics salesman Jamie Randall (Jake Gyllenhaal) out of a job due to his influential way with women, especially one he shouldn’t be charming. He transitions into a job as a pharmaceutical salesman for Pfizer and is assigned to sell Zoloft in the Ohio Valley.

While posing as an intern and trying to persuade a doctor to switch from prescribing Prozac to the pill he’s pushing, Jamie meets Maggie Murdock (Anne Hathaway). Initially she is angered that Jamie violates her privacy in the doctor’s examination room, but his persuasiveness and mutual desire for a commitment-free relationship win her over while she also keeps him at arm’s length. Maggie has early onset of Parkinson’s and doesn’t wish to be obligated to anyone or anything long term.

Among the medications involved in LOVE & OTHER DRUGS is a certain little blue pill that Jamie sells like gangbusters when it reaches the marketplace. Strange how for a movie about a Viagra salesman, we don’t see the growth of the characters. Several featured scenes in the bedroom leave Jamie and Maggie’s physical chemistry undisputed, but evidence of their emotional attachment and development is far less obvious. Jamie begins to change because the screenplay demands it. Maggie opposes any deviations in their arrangement because the script insists so.

The film’s central relationship wouldn’t feel so prescribed if LOVE & OTHER DRUGS weren’t pitched at a sitcom level. Rather than allowing two non-conformists to find their own way, director and co-writer Edward Zwick makes sure they are altered to fit the formula. Gyllenhaal looks and feels too young for the role and seems too eager to please for the incorrigible type he’s supposed to be.

Whereas Gyllenhaal is all surface level, Hathaway suggests a flesh and blood being dealing with a multitude of issues spoken and unspoken. Performance-wise she fares better, perhaps because Maggie functions as the redeemer than the redeemed. The role is more complicated than the usual dreamgirl. Unfortunately the film is more interested in her slick, straightforward other half. LOVE & OTHER DRUGS is a cutesy love story tempered by an illness and a smidgen of commentary about pharmaceutical sales in the United States.