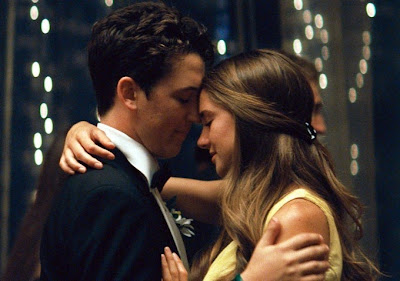 
The Ryan Adams song “To Be Young (Is To Be Sad, Is to Be High)” sums up THE SPECTACULAR NOW’s Sutter Keely (Miles Teller), although he’d probably deny that he feels all that down about anything.  Sure, he’s upset when his girlfriend Cassidy (Brie Larson) breaks up with him, but their relationship remains on generally friendly terms, keeping him confident of their eventual reconciliation.  Why wouldn’t she come back to him?  He’s the life of the party, and together they are the fun, beautiful couple to be admired at their Georgia high school.  As for being high, Sutter drinks a lot, but it isn’t something he views as a problem.  It’s what teenagers do.


After a particularly intense night of imbibing Sutter wakes up on the front lawn of fellow senior Aimee Finecky (Shailene Woodley) with no idea where his car is.  She gives him a ride, he helps out with her newspaper deliveries, and they make plans to meet for lunch one day at school.  Initially Sutter shrugs off their socializing as a favor he’s doing for a nice girl who is tutoring him in geometry.  The unassuming Aimee has never had a boyfriend and focuses her energies on academics and helping her mom pay the bills, but as they spend time together, they form a close bond despite their differences in personalities and priorities.


Sutter is a figure familiar to anyone who is or ever been in high school.  He’s in his element there and, like Simon Pegg’s character at the start of THE WORLD’S END, wants to stay forever partying with his friends.  Teller’s finely shaded portrayal shows that there’s more to Sutter than the gregarious and unserious guy that most people see. Acting with swagger, Sutter can appear like a player and a goof, but Teller also hints at the wounded spirit he’s hiding.  His commitment to being a failure becomes all the more tragic when the genuine self he bares to Aimee proves that he can be better than he’s permitting himself to be.


While Aimee is good for Sutter, he may a bad influence on her.  Scott Neustadter and Michael H. Weber’s screenplay, adapted from Tim Tharp’s novel, manages the tricky balancing act of creating a relationship that encourages a rooting interest and an awareness that it may be causing more harm than providing benefits.  Woodley is marvelous at conveying Aimee’s intellect and shyness while always feeling in control of the risks she takes.  Although Aimee is better adjusted than Sutter, she is also limited by the perceptions of herself she carries around in her head.  Woodley seems effortless in discovering who Aimee realizes she can be while not giving up her interests and dreams to keep the first boy to flatter her.


Director James Ponsoldt lets key scenes between Sutter and Aimee play out in wide shots and long-ish takes that do wonders for showcasing the chemistry developing between them.  The conversation leading to their first kiss and their sex scene advance with tenderness and humor, heightening the real connection of two kids on the verge of adulthood enjoying these moments in time and fumbling toward the future.  Their path is funny and painful and ever so believable.  With its sharp insights into teenage insecurities and relationships, THE SPECTACULAR NOW reveals itself as an instant coming of age classic. 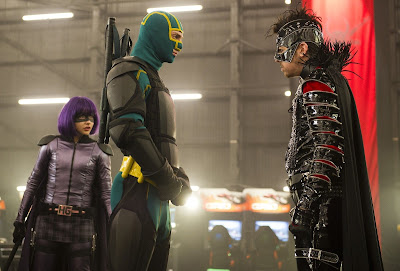 
In KICK-ASS 2 a member of the supervillain’s posse slaughters a bunch of New York City policemen with increasingly violent methods for comedic effect.  Granted, the perpetrator is on the side of all that is bad, but the scene is undoubtedly meant to be funny.  Clearly we’re well past the time of post-9/11 sensitivity when The Strokes pulled a song from their debut album because of a third-person observation in the chorus about the NYC cops not being very smart.  That’s not to say that the men and women in blue get a lifetime pass for how they’re presented in art, but in this particular context, the glee with which they’re murdered and the positive audience identification with the killer is troublesome, to say the least.


KICK-ASS 2 doesn’t put forth mixed messages so much as it extols vigilanteism and revenge and then, after the climactic battle, tries to paper over the ugly sentiments with lip service about proper conduct.  Lest there be any uncertainty about where the film stands in its conflicting statements, the pretense of responsibility is ripped away in the final scene.  KICK-ASS 2 warns to do as it says, not as it does.  Then it distributes firearms, body armor, and a costume with an encouraging slap on the back.


The sequel picks up with high school senior Dave Lizewski (Aaron Taylor-Johnson) having hung up his superhero uniform, but he can’t resist playing the hero again when he sees ordinary citizens following in the trail he blazed as Kick-Ass.  He begins getting back into crime-fighting shape under the rigorous training of freshman Mindy Macready (Chloë Grace Moretz), otherwise known as Hit-Girl, with the intention of them becoming a dynamic duo.  Plans for their alliance come to an end when her guardian, Detective Marcus Williams (Morris Chestnut), insists that she devote her after school activities to traditional socializing rather than meting out street justice.


While Mindy struggles to fit into the in crowd, Dave finds a group of like-minded civilians who want to join forces to clean up the Big Apple.  Colonel Stars and Stripes (Jim Carrey), a former mob enforcer turned born-again Christian with little tolerance for foul language, leads their so-called community service efforts.  Chris D’Amico (Christopher Mintz-Plasse) still seethes over Kick-Ass blasting his criminal father with a bazooka, so when he notices that Kick-Ass has resurfaced, he dons his mother’s fetish gear and dubs himself with an Oedipal, family publication-unfriendly name to refashion himself as the first supervillain with an accompanying crew of brutes.


Like its deluded, self-professed champions of public safety, KICK-ASS 2 fancies itself as something more admirable than it is.  How unsurprising for a film that stages a rape scene that uses framing and editing to empathize with the attacker even though the moment is ultimately played for laughs at his expense.  Rather than initiating a subversive conversation on superheroes and those who wish they could become them, KICK-ASS 2 indulges the worst power fantasies while also getting off on sociopathic behavior.