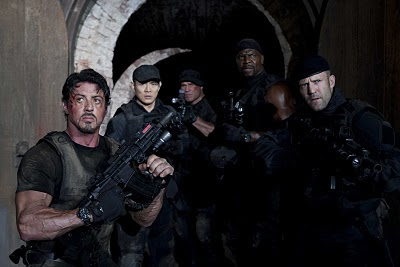 THE EXPENDABLES combines two generations of action stars for an exponential increase in cinematic firepower. Among those joining director, co-writer, and star Sylvester Stallone are Jason Statham, Jet Li, Dolph Lundgren, Terry Crews, and Mickey Rourke. Bruce Willis and Arnold Schwarzenegger appear in cameos to set the plot in motion.

THE EXPENDABLES draws its name from the Stallone-led band of mercenaries ready to be hired by employers with deep pockets. Their latest job takes them to a South American island where the Expendables are supposed to overthrow a dictator. As might be expected, the situation on the ground doesn’t exactly conform to how it was represented to them.

THE EXPENDABLES has one foot in ‘80s action films and the other in older tough guy movies like THE DIRTY DOZEN. Computer-generated effects take a back seat to the sheer brawn of the stars and the size of the explosions. As technology has granted filmmakers the ability to make almost anything on screen believable, it’s refreshing to see a return to the basics of action movies, in which physical presence and practical effects rule the day. If only THE EXPENDABLES were a better film.

The surplus of beefy heroes and villains leaves little room for turning these types into characters worth cheering or jeering. The hodgepodge plot, dominated by standard-issue mission details, is at once straightforward and yet jumbled to the point where it’s not entirely clear what’s going on. Most importantly, the fight scenes, while plentiful, aren’t memorable in the least.

The elite guns-for-hire premise doesn’t do much on its own in a year that has also produced the aptly named THE LOSERS and the erratic but overall entertaining THE A-TEAM. Despite it’s top shelf roster of action’s biggest from yesterday and today, The Expendables are more like The Unremarkables.