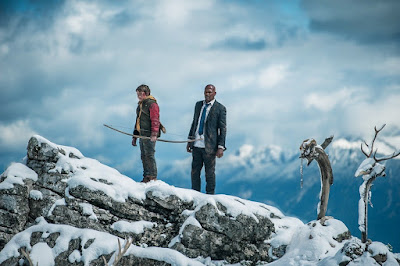 Although exceptions exist, there should probably be a rule that the more self-consciously outrageous a film description sounds, the more likely that the synopsis is all it has going for it. That’s certainly true of BIG GAME, in which a Finnish boy on a solo rite of passage hunt protects Samuel L. Jackson as the President of the United States from would-be assassins. Writer-director Jalmari Helander isn’t striving to make an ironically bad film that winks nonstop at an audience presumably in on the joke. Instead this action comedy appears inspired by fantastical 1980s movies in which kids become involved with something much larger than themselves and grow through their adventures.

On the verge of his thirteenth birthday Oskari (Onni Tommila) is sent alone into a Finnish forest for one day and one night to track and kill his prey with a primitive bow and arrow. His father passed this initiation into manhood, and the same is expected of him, although he isn’t strong enough to pull the string back fully on his weapon. Deep in the wilderness he comes across an escape pod containing unpopular U.S. President William Alan Moore (Jackson). Disgruntled Secret Service agent Morris (Ray Stevenson) disabled Air Force One’s security system to permit his associates to blow the plane and its escorts out of the sky. Killing the President is on their agenda, but Hazar (Mehmet Kurtulus) wants to make a big show of capturing the leader of the free world before having him stuffed and mounted like a trophy.

After determining that the President is not an alien, Oskari brings William along on his expedition. They’re too far from anywhere for the President to get to safety on his own, and Oskari isn’t going to bail on his mission. Unbeknownst to them Morris, Hazar, and his men are in the forest looking for them with the intent of finishing what they’ve started.

As silly as the impression BIG GAME’s recap gives, the film resists following through with the campy concept. Jackson’s performance is restrained, which results in a tender moment with Oskari as he explains the difference between looking and being tough, but is a film this patently absurd when he should be holding back? And what are Victor Garber, Felicity Huffman, and Jim Broadbent doing in this? It’s as though they signed up to appear in a goof, but Helander forgot to make it funny out of concern for not being taken seriously as a filmmaker.

BIG GAME’s earnestness also confuses because of how cheap it looks. The cut-rate special effects are more in keeping with direct-to-video blockbuster knock-offs, which reinforces the absence of expected humor. The good and bad guys spend a lot of time walking and talking in the woods, so action scenes are few and unremarkable. Helander’s send-up of big-budget conspiracy thrillers and boys’ quests fails to register as anything but a wacky idea. It’s too mundane to entertain as a willfully bad effort with some name talent. 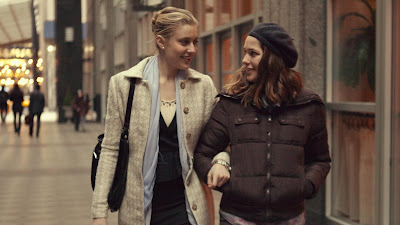 In MISTRESS AMERICA eighteen-year-old Tracy Fishko (Lola Kirke) is having trouble fitting in as a freshman at Barnard College, so she’s relieved to find someone to hang out with in New York City when she meets thirty-year-old stepsister-to-be Brooke Cardinas (Greta Gerwig). Brooke appears to live a glamorous urban life and dabble in seemingly everything. She works as an interior designer and SoulCycle instructor, came up with a t-shirt design that she claims her friend Mamie-Claire (Heather Lind) stole, is kicking around an idea for a television show, and is entertaining investors for a restaurant she plans to open.

When Brooke’s boyfriend pulls out of the restaurant deal, she is in desperate need of financing. Prompted by a fortune teller, Brooke goes to Greenwich, Connecticut with Tracy, her friend Tony (Matthew Shear), and his girlfriend Nicolette (Jasmine Cephas Jones) in tow to make a pitch for money to her wealthy ex-fiancé Dylan (Michael Chernus), who’s married to her nemesis Mamie-Claire.

The soon-to-be sisters in MISTRESS AMERICA are simpatico in sarcasm and self-obsession. Their conversations consist of pathological feedback loops in which they speak disparagingly of those not of their caliber or who have wronged them in some way. Brooke spots a captive audience to dazzle in Tracy, probably because she has not bore witness to Brooke’s trail of professional flameouts. Tracy enjoys being around Brooke, who is fun, brash, and accepting of her company even as she doesn’t seem to listen, but in her the literature major also discovers a rich source of inspiration for the thinly fictionalized short story she has started writing. Both yearn to make their marks on the world. The comedy comes from the symbiotic relationship between these miserable people searching for the answers, reassuring each other of their superiority, and yet failing to achieve their dreams. They can virtually complete each other’s sentences, not so much from closeness but because of their shared disdain.

Gerwig plays Brooke as a force of nature, the type of person who becomes the center of attention in whatever situation she finds herself in. The character is a marked contrast from her notable roles in GREENBERG and FRANCES HA, her previous collaborations with director Noah Baumbach. As in those films Gerwig plays a young woman seeking where she belongs, but in MISTRESS AMERICA, which she co-wrote with Baumbach, she’s a screwball egotist. In a strange way she remains a sympathetic figure because her big talk is clearly indicative of compensating for feeling inferior.

Baumbach has always been very good at guiding actors to convey his caustic wit. With MISTRESS AMERICA he demonstrates a deft ability for choreographing farce. Relationships are tested after Brooke and company barge into Mamie-Claire and Dylan’s home and bring most of the film’s second half to a furious pace powered by incidents and accusations. The speed with which these scenes move relate to the flurry of distractions the protagonists bury themselves in to make it easier to ignore the failure of their pursuits. As unbecoming as Brooke and Tracy’s behavior can be, MISTRESS AMERICA emerges as a funny film about the painful path to maturity through accepting one’s shortcomings and committing to being a better person.

After the apocalypse Ann (Margot Robbie) must fend for herself at the family’s apple farm in the valley. Her parents left to search for survivors. Eventually her thirteen-year-old brother departed to look for their mom and dad. Getting by day to day isn’t easy, especially without electricity and no companion but a dog, but Ann is resourceful and keeps the faith in a place the closest thing to Eden in Z FOR ZACHARIAH’s harsh, radioactive world.

One day she comes across the first person she’s seen in a year. John Loomis (Chiwetel Ejiofor) is a civil contractor who was in a bunker a mile underground when the disaster occurred but becomes unwell from bathing in the poisonous water Ann finds him in. She nurses John back to health, and they become close, as might be expected of a man and a woman who may well be the only people around for a great expanse or anywhere. Although Ann shows desire for becoming physically intimate, John suggests they wait because it will change things.

Then Ann stumbles upon Caleb (Chris Pine), a miner who has traveled from fifty miles away and is planning to go south to the gulf where he believes others may be. Ann is glad to welcome more company, but John is suspicious of this newcomer. Caleb does not intend to stay long but grows comfortable there. He assists with John’s project to restore power to the house and bonds with Ann through their shared Christianity. While their situation has improved, a strained competition exists between the men for Ann’s affection.

Faith looms large in Z FOR ZACHARIAH. As the daughter of a minister who moved the family to this spot because he believed it would be protected, Ann has good reason to trust that God has a plan even in terrible times like this. Loneliness and winter’s coldness have made Ann question her will to continue, but her belief gives her the encouragement to press on. Despite the hardships, the land and tools available to her meet her needs. Ann recognizes that for all of the rewards promised in the Bible, the holy book never claims that life will be easy. Caleb’s view is less nuanced. He is convinced that they survived because they have faith, as though their convictions earn a kind of cosmic immunity, although his logic doesn’t account for a non-believing John.

There’s also a non-religious faith held by characters and the audience at work in Z FOR ZACHARIAH. Ann is the least guarded of the three, and thus there is no reason not to take her at her word. Robbie gives a strong performance in expressing the necessary toughness to endure this scenario while maintaining the youthful naiveté that may also be an asset to her mental well-being. The inclination is to rely on John’s story as being true while nurturing some skepticism about Caleb’s, at least at first. Ejiofor oozes decency and intelligence, yet he plays John as though an unspoken darkness gnaws at him. Pine challenges the first impression of Caleb, making him seem dangerous or authentic depending on the angle he’s seen from.

Director Craig Zobel’s previous film COMPLIANCE hinges on individuals accepting at face value what they’re being told and following through on it with horrible consequences. In Z FOR ZACHARIAH there is no way of knowing for certain if anyone is being honest, just the reliance on gut instincts. Zobel wrings tension from the scenario by toying with how actions might appear based on available information. John viewing Ann from a distance through a rifle’s scope brings his trustworthiness into question early on until we learn Ann suggested he watch her through it. Before their paths cross Caleb presumably is the one eavesdropping on Ann playing the organ, which, fairly or not, leads to a conclusion about his credibility. He also aims a gun near John while the two are out hunting, although he does so to hit his target, not his potential romantic rival.

For viewers the test of whether to believe the best or worst about Ann, John, and Caleb extends through Z FOR ZACHARIAH’s ending. Regardless of how the conclusion is interpreted, it seems to be an argument for giving people the benefit of the doubt. For the characters putting trust in each other may mean something as critical as the difference between living and dying or valuable as upholding social stability. In this extreme circumstance they have no one to place their faith in but one another. These are active players in determining their own fates. Whether their trust proves to be misplaced or not, they are likely better off giving than withholding it.