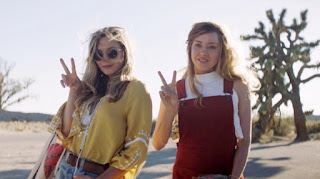 INGRID GOES WEST begins with a distraught Ingrid Thorburn (Aubrey Plaza) crying as she scrolls through the bubbly Instagram posts her friend Charlotte (Meredith Hagner) makes from her wedding. Ingrid wasn’t invited, so she crashes the reception and maces Charlotte before being dragged off. Although it appears that this was a friendship that soured, in reality they barely know one another. Charlotte just happened to comment on one of Ingrid’s posts, leading the obsessive social media user to stalk her as though they were besties.

After a period of institutionalization, Ingrid returns home as isolated and lonely as ever now that her mother has died. Without any supervision, she reverts to bad behaviors and seeks a new person to fixate on. Ingrid zeroes in on photographer Taylor Sloane (Elizabeth Olsen). When she receives a tidbit of validation from her new target, Ingrid decides to use the money she inherited to move to California and hunt down her new best friend.

Make no mistake, Ingrid definitely has unresolved mental health issues, but the running joke in this dark comedy is that Taylor’s narcissism allows the distorted but symbiotic relationship to flourish. The “friendship” is mutually beneficial because it’s one-sided on both sides. Ingrid affirms everything Taylor says and does. She’s a mirror rather than a friend, but being like this gets Ingrid close to Taylor, which is all she wants. Taylor gets her ego stroked by someone who’s like the physical manifestation of her fawning Instagram mentions. Each person in the relationship matters only in the sense of what they reflect.

INGRID GOES WEST is savvy to the nuances of social media and smartphone usage. Not muting her phone’s keyboard provides an early indication of Ingrid’s pathology. Ingrid’s responses to posts are intended to seem casual but are in fact the result of several drafts that have her sweating over the least threatening way to indicate laughter without coming across as needy or deranged. Although writer-director Matt Spicer and co-writer David Branson Smith savagely dissect social media usage, they aren’t alarmists. When people are feeling more disconnected and superfluous, they identify the fundamental appeal of platforms that allow us to transmit idealized versions of ourselves and feel as though we are loved. How social media can be used isn’t a disease but a symptom.

If INGRID GOES WEST expresses contempt for anything, it is the predatory element that can drive the conversation. Taylor catches Ingrid’s eye because a magazine article pegs her as the new girl crush for readers. She’s not presented as someone who is interesting for whatever merits she has but as a trophy of sorts or this year’s product model to acquire. Conversely, Taylor’s persona is constructed on falsehoods that lay traps. Although purportedly a photographer, her real job is as an influencer. She’s paid to promote goods and services as though she’s sharing her tastes.

INGRID GOES WEST’s cast brings a pointed sense of humor to a world in which getting to know someone only goes as deep as creeping on their social media posts and lists of likes. Plaza tends to specialize in characters who are funny because they are so prickly. Part of the fun of her as Ingrid comes in how she disguises that aloofness and when she lets it show. For all of Ingrid’s purposeful and questionable actions, Plaza shows how this young woman is ultimately very naïve because most of her personal interactions are mediated through technology. O’Shea Jackson Jr. lends sweetness to the film as Ingrid’s incessantly vaping, BATMAN-obsessed landlord and sort-of boyfriend. Olsen is very funny exaggerating Taylor’s vapidity. The humor and horror of INGRID GOES WEST comes not from being a cautionary tale but the observation that, to a large extent, this is how we live now. 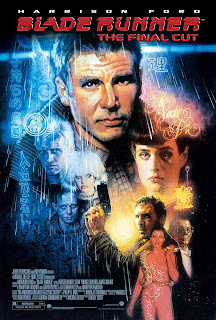 Four artificial yet human-like drone workers known as replicants escape from laboring on a planet colony to running from the law in 2019 Los Angeles. The replicants, led by Roy Batty (Rutger Hauer), are marked for death--or retirement, as it’s called in director Ridley Scott’s science fiction film BLADE RUNNER. Rick Deckard (Harrison Ford) is a weary policeman in the Blade Runner unit who is tasked with hunting down and executing these runaways. Although he harbors no sympathy for the creations of the Tyrell Corporation, his view of them becomes complicated when he meets Rachel (Sean Young), the latest replicant iteration and one that can pass even more convincingly as a real person.

BLADE RUNNER transports the world of mid-20th century film noir several decades ahead. With blazing neon signs and massive advertisements cluttering the polluted, rain-battered skyline, Scott’s vision, which itself owes a debt to METROPOLIS, has essentially defined how the future is expected to look on film. THE MATRIX and GHOST IN THE SHELL are just two examples of many that derive their looks from this seminal work. Thirty-five years later the images in BLADE RUNNER still dazzle with visual imagination in addition to being fundamental to establishing the oppressive atmosphere that permeates the story. The detective, his targets, and most of the individuals with whom they come into contact feel choked by the dystopian lives into which they’ve been delivered. Their environment reflects the restrictions occupying their minds.

Vangelis’ synth-laden score is evocative of a foreseen time in which the distinction between man and man-made begin to blur. Electronic melodies emerge from machine-like clanging and burbling, the human or human-like straining to rise above the mechanistic. BLADE RUNNER’s score also expresses the weight of the atmosphere, bringing to bear the darkness, fullness, and brittleness of the strange advances that have become commonplace.

In their loose adaptation of Philip K. Dick’s DO ANDROIDS DREAM OF ELECTRIC SHEEP?, screenwriters Hampton Fancher and David Webb Peoples raise questions as relevant as ever regarding technology and how it affects our philosophies, our economies, our interactions, and the environment. BLADE RUNNER is more of a canvas for sketching out ideas for further consideration than a deeply argued text, yet it seems strikingly prescient in anticipating how modern life is becoming more inhuman.

Five versions of BLADE RUNNER have been available on home video: the U.S. theatrical cut, the international theatrical cut, the 1992 so-called director’s cut, the workprint, and 2007’s THE FINAL CUT. Despite being called the director’s cut, Scott was not as involved with that version, making THE FINAL CUT the best realization of his vision for the film. The obsessive may want to track down the other cuts or read up on the differences, but this version should serve most well. 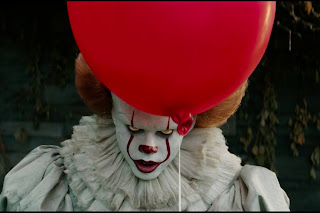 In October 1988 Georgie Denbrough (Jackson Robert Scott) goes out in the rain to play with the paper boat his older brother Bill (Jaeden Lieberher) makes for him, but he never comes back, having been attacked by the sewer-dwelling Pennywise the Dancing Clown (Bill Skarsgård). In IT Georgie’s tragic disappearance is curiously unexceptional. In Derry, Maine missing kids are like a seasonal crop. The next summer Bill remains persistent in his search for Georgie. The hunt he leads will bring him and his bullied friends, including jokester Richie (Finn Wolfhard) and Beverly (Sophia Lillis), the lone girl among this circle of self-identified losers, closer to whatever evil emerges every twenty-seven years.

Screenwriters Chase Palmer, Cary Fukunaga, and Gary Dauberman don’t attempt to adapt all 1100+ pages of Stephen King’s source novel for this version of IT, yet the film still feels like it’s racing to cram in as much plot as possible in 135 minutes. It’s breathlessly paced, which is a positive quality in a monstrously sized page-turner and a detriment when trying to build suspense and instill horror in a movie. Films create more tension through the anticipation of something will jumping out of the shadows. Alfred Hitchcock explained that suspense comes from letting the audience know something will happen and stretching out the moments until that event, such as knowing when a time bomb will go off. Having that bomb explode unexpectedly in a scene is merely surprise, providing a jolt for a few seconds rather than the suspense of several minutes. Instead of massaging scenes for the inherent terror in skulking around dark places, IT exhibits a tendency to cut right to that fleeting payoff when the evil thing reveals itself.

While IT feels unsatisfactory as a scary movie, it is more perceptive regarding the nature of fear. What frightens people is individualized, making the evil in Derry so horrific because it looks different according to the observer. Whether one is unnerved by clowns or not, Skarsgård’s friendly manner laced with menace and Pennywise’s extra-long, front teeth, suggesting a predatory, animal-like quality, makes this particular manifestation of a sinister, supernatural entity so disturbing. The double bind of a welcoming figure who exudes a sense of malevolence stirs up unease that can be easier to intuit than explain. The way Skarsgård overenunciates his t’s, like a sledgehammer smiting a spike, puts one on edge.

IT director Andy Muschietti excels at capturing how kids act with one another and coaxes terrific performances from his young cast. Depictions of teenage life on film often veer toward idealized reminiscences or sensational portraits of trauma. IT recognizes that the casual cruelty and extraordinary kindness teenagers are capable of are points on a spectrum, and the simplicity of moving along that line is what can make this particular stage intimidating and exciting. The group of kids is clever but not in a precocious way. Their wisdom is still limited by their ages. Unlike the caricature of a character he was saddled with in THE BOOK OF HENRY, Lieberher portrays Bill with the vulnerability and fortitude believable for a teen wrestling with tragedy. Lillis impresses in playing Beverly as someone whose experiences have made her wise beyond her years and aware of her power. As horror, IT can be lacking, but as teen drama it can be quite effective.