Legend of the Guadians: The Owls of Ga'Hoole

LEGEND OF THE GUARDIANS: THE OWLS OF GA’HOOLE (Zack Snyder, 2010)

Sneaking off to improve their flying has terrible consequences for brother owlets Soren and Kludd in LEGEND OF THE GUARDIANS: THE OWLS OF GA’HOOLE. The two barn owls, voiced by Jim Sturgess and Ryan Kwanten, tumble to the ground during practice and are abducted.

Along with other owlets, Soren and Kludd are told that their new family is with the Tytos, a parliament of warmongering pure ones led by Metalbeak (Joel Edgerton). Soren resists his captors’ persuasion and is sent off to be a picker while Kludd elects to be a soldier in Metalbeak’s army. Soren and a friend escape and set off in search of the legendary owls of Ga’Hoole, who they hope can save and protect everyone.

LEGEND OF THE GUARDIANS: THE OWLS OF GA’HOOLE director Zack Snyder also made 300, which was virtually a live-action cartoon, and his love of super slo-mo action poses accelerated into full speed clashes is lavished on this CGI-animated film. In other words, LEGEND OF THE GUARDIANS is the kids movie version of 300 featuring owls. It is short on story, which is actually a plus in this instance, and long on that full battle rattle.

The breathtaking aerial assaults convey a palpable sense of velocity and force, especially in 3-D. On-screen violence and its aftermath is suggested more than depicted so that the film keeps a PG rating, although the intensity may be enough to inspire nightmares in younger children.

Unlike Snyder’s humorless 300, LEGEND OF THE GUARDIANS incorporates some lighter comedic moments, such as when the owlets pretend to be hypnotized by the moon to fit in with the other pickers and meet with a mystical spiny anteater who claims to know everything about them. The animation is top notch, with each barb in the feathers rendered in photorealist detail. The repetition fatigue that plagued 300 also weakens LEGEND OF THE GUARDIANS, but otherwise it's an entertaining, action-packed fable.

Email ThisBlogThis!Share to TwitterShare to FacebookShare to Pinterest
Labels: action, animation, Jim Sturgess, Legend of the Guardians, The Owls of Ga'Hoole, Zack Snyder 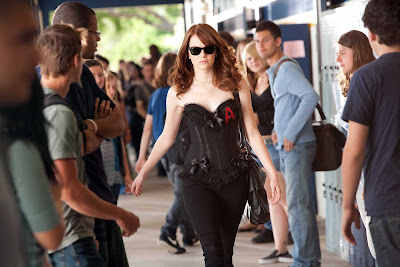 In the comedy EASY A high school student Olive (Emma Stone) has her reputation soiled when an overheard and misunderstood conversation in the restroom leads to rumors of her promiscuity. The gossip improves her social standing, so Olive doesn’t make an effort to clear the air. When a classmate asks her to fake having sex with him so he’ll stop being bullied due to his homosexuality, she finds herself as the sole provider in a cottage industry to help the school’s outcast virgins.

By dressing more provocatively and SCARLET LETTER-like through the affixing of a large A to her clothes, Olive embraces the notorious position she now has within the school . Meanwhile, sanctimonious classmate Marianne (Amanda Bynes) leads a group of conservative religious students in a campaign to ostracize their presumably promiscuous peer.

Stone earns high marks in EASY A for her confident and vulnerable performance. She displays a good sense of timing and reaction when playing the comedic parts of the role, especially when it comes to verbal sparring. Stone also hits the right emotional notes when it becomes clear that the scrutiny and judgment by Olive’s peers have begun to take their toll. Like Carey Mulligan’s character in AN EDUCATION, Olive’s intelligence can be her greatest asset and shortcoming, and Stone locates the pain that comes in having her cleverness get the better of her and the superficial apathy she wears. 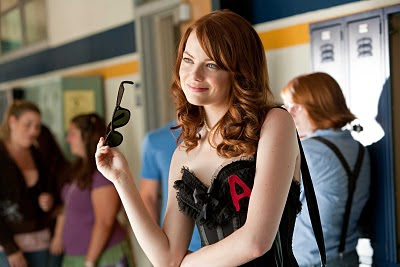 With EASY A director Will Gluck and screenwriter Bert V. Royal undertake an ambitious effort to make a movie about teen sexuality and double standards. The dialogue is sharp and funny throughout, even when the writer is obviously a little too pleased with his own wit. EASY A treats the issues and social pressures with a seriousness uncommon in similar films, although it tends to retreat when beginning to dig into tough questions.

The role of technology in the rapid distribution of rumors and instantaneous ability to ruin someone’s life goes unexplored, which is a missed opportunity considering that EASY A is framed by a webcast Olive uses to explain her story to the entire school. Examining the effects of social media in such a situation would have been a better use of time than the self-reflexive John Hughes references that the filmmakers indulge.

The film also take a wrong turn when complicating matters with a more comparable SCARLET LETTER scenario than Olive’s circumstances. Despite its faults, EASY A passes due to Stone’s star turn and a knowing screenplay that needed a little more bravery to elevate it to a top achievement. 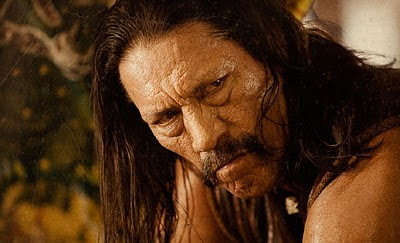 In MACHETE Danny Trejo plays the Federale who wields the type of blade with which he shares a name. An operation to take down a drug lord ends badly, and for the next three years the now former Mexican law enforcer must scrounge out a living with the other undocumented day laborers in Texas.

After Machete delivers an impressive display of cunning and brute force in a street fight, a stranger approaches him with the offer of a big payday in exchange for assassinating Senator McLaughlin (Robert De Niro), whose campaign demonizes illegal immigrants. Machete accepts the job but soon finds out that he’s being set up. He bands together with taco truck owner Luz (Michelle Rodriguez) and Immigration and Customs Enforcement agent Sartana (Jessica Alba) to crush the bad guys and help his fellow downtrodden countrymen.

MACHETE originated as one of the fake trailers between the Robert Rodriguez and Quentin Tarantino features in GRINDHOUSE. Now expanded to feature length, this indulgent homage to exploitation films resembles its inspirations in good and bad ways. 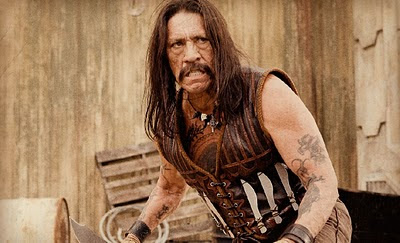 MACHETE starts like gangbusters with Trejo as a one-man Chop-O-Matic invading the villain’s turf. The pre-opening credits sequence blends extreme violence and riotously funny gags to perfection. There’s no question that Rodriguez and co-director Ethan Maniquis know they’re making trash, and they delight in being as outrageous and inappropriate as they can be.

Their no-holds-barred approach in MACHETE’S vengeance tale can be genuinely thrilling, but it also permits a lot of sloppiness. MACHETE’S less than rigorous direction and editing trim as much expository fat as possible so there can be more of the good parts, meaning one-liners and action and sex scenes. It’s not a coincidence that MACHETE first existed in trailer form. As a feature it unspools like a loosely connected highlight reel that starts to feel repetitive after awhile.

Fueling MACHETE is on-the-nose commentary regarding the immigration debate. It’s a more political movie than one might expect from an ode to junk cinema, although dabbling in the issues while trafficking in schlock fits in the tradition. Nevertheless, MACHETE’S blunt blade can be unsheathed more than is necessary to make a philosophical point. The lack of subtlety and discipline is what can make MACHETE a disreputable pleasure and less than a full success. 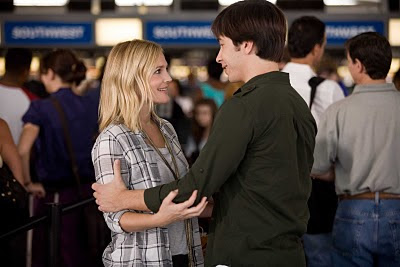 Drew Barrymore and Justin Long attempt to maintain a bicoastal relationship in the romantic comedy GOING THE DISTANCE. Long’s record label employee Garrett and Barrymore’s aspiring journalist Erin hit it off immediately, but they promise not to get too serious because in six weeks she’ll be leaving New York City for grad school in California. When the time comes for her to head west, Garrett and Erin realize that they want to continue their young romance in spite of whatever difficulties the distance might bring.

Not only is GOING THE DISTANCE a consistently funny romantic comedy, it possesses the rare wisdom to explore the relationship rather than contriving conflicts. So many films in this genre get bogged down in generating immediate artificial discord to split the couple apart for the inevitable big reunion. This strategy loses sight of developing a romance that stokes the desire for such a reconciliation in the first place. Building with scene upon scene of Garrett and Erin showing their funny, warm, and vulnerable sides, GOING THE DISTANCE lets the characters fall in love and gives the audience a reason to root for them before they have reasonable problems to overcome.

It helps that Barrymore either has a nose for the right script or knows how to tailor them to her strengths. She’s again playing a variation on her usual role of the down to earth free spirit, but why complain when she is so good at creating appealing and relatable characters like she does here?

GOING THE DISTANCE gives both elements of this film type equal weight. While the romance is nurtured, the laughs never wane in this sharply timed comedy. Director Nanette Burstein and screenwriter Geoffrey LaTulippe spread the wealth, and the raunch, among the strong ensemble, which includes Jason Sudeikis, Christina Applegate, and Jim Gaffigan. As Garrett’s strange, good-natured roommate Dan, Charlie Day swipes the most scenes, whether it’s by listening too attentively through the bedroom wall or conducting conversations with the bathroom door open. GOING THE DISTANCE is concocted from a familiar formula. It just happens to be a really good example of what can be done with it.