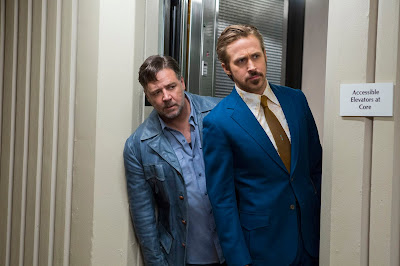 A young woman is on the run and hiding from unknown people in 1977 Los Angeles when she pays muscle-for-hire Jackson Healy (Russell Crowe) to persuade private investigator Holland March (Ryan Gosling) to stop looking for her in the film noir comedy THE NICE GUYS. Holland is tracking Amelia Kuttner (Margaret Qualley) because an old lady has apparently mistaken her for her niece, a porn actress who died days earlier in a car crash. Jackson and Holland don’t make their introduction on the best of terms, what with Jackson breaking Holland’s arm, but they team up to search for Amelia when the professional intimidator realizes that her life is in danger if they don’t find her first.

Both are broken men, although Jackson is dealing with his wife’s demeaning departure better than Holland mourning his spouse’s death. Complicating their search is the undeniable fact that Holland is a drunk, although at least the disadvantages tend to be canceled by the positive effects of his bumbling. Holland’s precocious thirteen-year-old daughter Holly (Angourie Rice) tends to disregard his orders to go to a friend’s house for the night when the guys are out investigating, so she she often finds a way to tag along. Holly proves to be helpful, but she’s an additional concern for Jackson and Holland when the setting is no place appropriate for a kid and the bullets are flying.

As pleasurable as it is to listen to these characters’ terse chatter, the physical comedy is aces too. Gosling gets a showcase bit when Jackson confronts Holland in a bathroom stall. With his pants around his ankles while on the toilet Holland tries to recover the lit cigarette he dropped, prop the stall door opened, handle a gun, and keep his private parts covered with a magazine. His fumbling simultaneous management of these tasks is terrific slapstick. There’s a cartoon-like quality to the physical comedy too. When Holland scrambles to retrieve a bouncing film canister, he chases after it with the single-mindedness of Skrat’s pratfall-riddled pursuit of an acorn in the ICE AGE shorts and films. All that’s missing are animated birds circling the head of an uncooperative bartender when Jackson yanks on the witness’ tie like he’s ringing church bells and cracks his forehead on the bar. Looney Tunes wouldn’t go so far to depict the THE NICE GUYS’ darkly humorous disregard for bystander victimization and situational errors, as in corpse disposal, but both share the anarchic sensibility regarding comedic violence. Black makes clever use of the frame to bring some extra kick to the jokes, whether through the use of a lighter’s flame to reveal what a character hasn’t noticed is next to him or finishing gags with action in the background.

While THE NICE GUYS is a very funny movie, the sadness and cynicism coursing through it maintain the connection with noir. A lot of terrible incidents get shrugged off as just the way things are. Despite the film’s blithe attitude about killing and corruption, Holly, impressively played by Rice as a Veronica Mars in the making, embodies innocence worth shielding from all of the ugliness. Having lost her mother and home--and her father too, implicitly--Holly acts as though she’s seen it all, yet Rice reveals the character’s pure nature when directly confronted with the awful actions of adults. Sometimes all you can do is laugh off all of the rotten things in the world, but sometimes you have an obligation to maintain the moral center. THE NICE GUYS balances jaded amusement and reluctant uprightness exceptionally well. 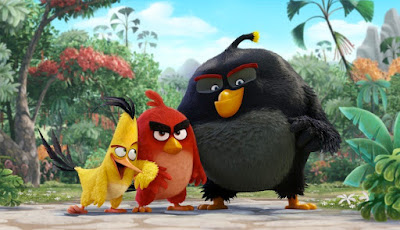 The knee-jerk reaction is to assume bad, frivolous, or less-than-inspired source material automatically means a film adaptation is folly, yet good ideas for movies come from unexpected places all the time. Plenty of popular but critically-derided books have been turned into good films, and several literary classics have been converted to the screen with dismal results. Still, it’s easy to scoff at the notion of movies based on theme park rides, board games, newspaper comic strips, or whatever weird source comes to mind. Positive examples may be rarer, like the first PIRATES OF THE CARIBBEAN film and Robert Altman’s POPEYE versus THE HAUNTED MANSION, BATTLESHIP, and MARMADUKE, but the problem isn’t with where they originated but how they were realized. Which brings us to THE ANGRY BIRDS MOVIE, a computer-animated comedy adapted from the mobile game.

Life is happy and carefree for most of the flightless avian residents of Bird Island, but for Red (Jason Sudeikis) pretty much everything is an affront. Red nurtures a grudge about growing up as an orphan and continuing to be teased about his prominent eyebrows. With his home relocated outside the village, Red’s sense of disconnection from his chirpy neighbors increases. Red is quick to anger, and an outburst in court gets him sentenced to anger management counseling where he meets the speedy, prevaricating Chuck (Josh Gad), the literally explosive Bomb (Danny McBride), and silent, imposing Terence (Sean Penn).

The birds are unaware of anyone beyond their perch in the ocean until one day when a ship arrives with green pigs. The ship’s captain Leonard (Bill Hader) comes bearing gifts, and the birds warmly accept the pigs. Red, though, is suspicious of the visitors’ intentions. He persuades Chuck and Bomb to join him in a search for their mythical protector Mighty Eagle (Peter Dinklage) in the event that they need to drive off the pigs.

THE ANGRY BIRDS MOVIE isn’t bad so much as it is unfailingly ordinary. This rote execution of the modern big-studio animation formula assembles a constellation of celebrities and comedians to voice the characters, sprinkles in some mildly inappropriate jokes kids won’t get but acknowledge the adults accompanying them, and winds up with a dance scene set to a pop song. No one was expecting THE ANGRY BIRDS MOVIE to be revolutionary, nor need it be, but the lack of a creative spark is notable. A film as brand extension doesn’t have to be inherently risk-averse. In many respects THE LEGO MOVIE is also a feature-length commercial for toys and games, yet its inventiveness overshadows the unit sales-driving force behind its existence.

A fantasy sequence with Leonard and an egg set to The Carpenters’ “Close to You” is moderately amusing, although the tried-and-true song cue is indicative of the film’s lack of imagination with its pop culture references. (It seems like a missed opportunity that Public Image Ltd.’s “Rise”, with the repeated lyric “Anger is an energy”, is not employed in the film.) Hader brings some smarmy humor to the diabolical pig king. The funniest thing might be Penn’s casting as a surly, fearsome bird, but it’s a meta in-joke that goes virtually unrecognized except for spotting his name in the credits. In general THE ANGRY BIRDS MOVIE doesn’t strive to be anything more than a mindless time diversion not unlike a game played on a phone while waiting in line. Thirty years ago this might have been a feature film, but its natural form is as a half-hour show playing at 3:30 in the afternoon on a broadcast TV station.

As the audience for THE ANGRY BIRDS MOVIE is primarily children, there is an implicit expectation that a message, however half-hearted, must be conveyed, even in something that’s the cinematic equivalent of empty calories. Setting aside the possibility of a political reading regarding the warranted fear of outsiders, the moral of the story is curious. THE ANGRY BIRDS MOVIE suggests that it is right to feel aggrieved because in due time others will come around to appreciate that perspective. Something tells me that won’t be the takeaway of FINDING DORY.