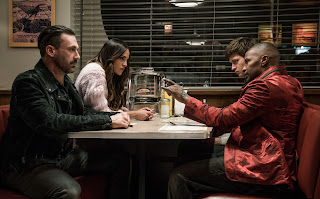 With the name Baby (Ansel Elgort), his lanky appearance, and omnipresent earbuds from one of his many loaded iPods, the protagonist of BABY DRIVER seems more like an aspiring indie rock star than the preferred wheelman for an Atlanta kingpin. He obsessively listens to music to tune out tinnitus from a childhood car accident that claimed his mother and father, but it also helps him focus when he’s driving fast and executing dangerous maneuvers. When he was younger Baby stole a car from the wrong man, so for years he’s been using his prodigious skills as a driver during heists to repay what he owes to Doc (Kevin Spacey).

After he makes things square for his past mistake, Doc isn’t inclined to let his best getaway man walk away and leave him hanging even though Baby wants out. It’s abundantly clear, though, that the wellbeing of Debora (Lily James), a diner waitress he’s started seeing, and his deaf surrogate father Joseph (CJ Jones) will be leveraged to pull Baby back for at least one more job. Ordinarily Doc doesn’t employ the same criminals twice, but he recalls bloodthirsty Bats (Jamie Foxx) and druggie lovebirds Buddy (Jon Hamm) and Darling (Eiza González) for a scheme to steal blank money orders from a post office. Baby really has no choice but to participate, although he hopes to be able to slip away with his dreamgirl before he’s pressed into action.

Writer-director Edgar Wright conceives BABY DRIVER as an action film set to a feature-length playlist. Strictly speaking, it’s not a musical, yet the wall-to-wall soundtrack and syncing of movement and sound with the rock and soul tracks give it the feel of one. The opening credits sequence with Baby grooving down the street to Bob & Earl’s “Harlem Shuffle” as he goes to pick up coffee for the crew is more reminiscent of LA LA LAND than a Michael Mann crime picture. Throughout the matching of music and action prompts a synergistic reaction for such a bracing and joyful demonstration of filmmaking craft.

The delightful choreography extends beyond the actors’ motions and gestures. The car chases are planned, shot, and edited to deliver the thrills of fast machines being handled in incredible ways. Contemporary action cinema’s editing styles tends to favor sensation over legibility. CGI has reduced the reliance on practical effects, some for greater capability and some surely for safety’s sake. Both approaches have led to forgetting or devaluing the simple pleasures of a good car chase. Wright starts BABY DRIVER with a doozy that includes a clever reshuffling of similar cars to throw the authorities off the trail of the fleeing criminals. He doesn’t top this car chase, but the others in the film are plenty exciting as they’re stoked by pulse-pounding songs.

The screenplay, the first credited solely to him since his low-budget debut A FISTFUL OF FINGERS, is loaded with witty dialogue versed in pop culture. An argument over the purchase of the wrong Halloween mask exemplifies the cleverness and speed in Wright’s writing. Spacey is particularly suited for the rat-a-tat-tat rhythm of the verbal humor and gets probably the biggest laugh when expressing his weariness of Baby quoting one film. BABY DRIVER doesn’t have the depth of THE WORLD’S END, Wright’s best film, but like all of his movies it bubbles with a sense of fun. The energy and assuredness in his direction signals to strap in and enjoy the ride. 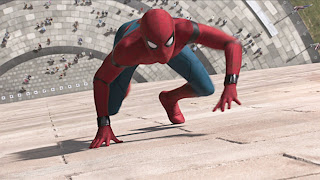 Although Peter Parker (Tom Holland) tries to balance life as a high school student and a superhero in SPIDER-MAN: HOMECOMING, naturally he’s drawn more to fighting crime and being a beloved part of the community. To his frustration, Tony Stark (Robert Downey Jr.) cautions him about getting too involved in such extracurricular activities, although he does provide him with an improved suit. After a night patrolling the neighborhood, Peter’s best friend Ned (Jacob Batalon) learns that he is Spider-Man, a fact that delights him to no end.

Peter stumbles upon the shady dealings of Adrian Toomes (Michael Keaton), a former salvager now using and dealing alien technology to enrich himself and his associates. While Tony doesn’t want Peter to pursue the matter, he can’t help but investigate, which puts him and and his classmates at risk.

SPIDER-MAN: HOMECOMING brings more of the traditional comic book sensibility back to the superhero universe. Director Jon Watts, one of six credited screenwriters, constructs the film like a teen movie with some regular people possessing extraordinary powers than something rooted in the realm of fantasy. Doing so grounds SPIDER-MAN: HOMECOMING and gives it a touch of wonder at the incredible feats the heroes and villains perform. Watts also suffuses this SPIDER-MAN with a breezier tone that gooses the humor, particularly in the scenes with Peter’s high school peers, and makes the protagonist and his struggles more down to earth.

Holland exudes a lot of charm in his first time playing the ordinary teenager turned webslinger. He imparts Peter with infectious enthusiasm, which he tempers with the insecurity and desire to push limits that are a hallmark of adolescence. He is confident scrambling up the Washington Monument but less sure of himself when it comes to asking his academic decathlon teammate Liz (Laura Harrier) to the dance. Holland lends a dancer’s grace to the physicality with which he plays Peter and Spider-Man, which reinforces the joy that buzzes through the film.

SPIDER-MAN: HOMECOMING surrounds Peter with a splendid supporting cast. Batalon is funny and endearing as the pal who is excited for Peter and at the prospect that he might be able to be his assistant, the proverbial guy in the room in action movies. As wisecracking classmate Michelle, Zendaya often gets some of the biggest laughs from the withering way she expresses herself. Harrier adds depth to the potentially thankless love interest role as she evokes the complexities in the romance Liz and Peter hesitantly begin.

Keaton fleshes out the antagonist so that his perspective is understandable even if it isn’t justifiable. Adrian’s bruised sense of fairness and need to provide for his family guides him down a darker path that gradually eases him down the moral slippery slope. Keaton lets the character cook in his righteous outrage, like a frog not realizing it’s being boiled as the temperature in the pot slowly increases. For Adrian the outcome is similar as his corruption he gives in to slowly grows.

It doesn’t seem like there are a zillion different things happening in SPIDER-MAN: HOMECOMING or that it absolutely has to fit within a larger framework of the Marvel films. The less convoluted story allows the film to feel fleeter and dig into the character elements. After a string of unsatisfactory SPIDER-MAN movies, it’s a pleasure to encounter one notable for its zippy sense of fun, humor, and thrills.

War for the Planet of the Apes 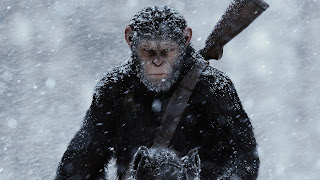 At one point as a kid I wondered what it would be like in movies or after-school cartoons if the bad guys won for a change. After all, no matter how things appeared to be going in these shows and films, everything predictably worked out in the end. I suspect that this fleeting thought from my childhood was common among those of the same age who were becoming bored with the formula. Now that my generation has a lot of sway in what gets made, it seems that we’re getting the chance to discover what it feels like when the course reverses and good doesn’t triumph or its victories in mass entertainment are pyrrhic. Think of all the remakes and franchise reboots in the last decade or so whose differentiating quality is that they are now dark, gritty, or edgy. The new normal is an overwhelming sense of gloom and doom, in part because it is considered more artistically serious. While any framework will yield worthwhile and lousy results, this worldview in event films has become exhausting.

WAR FOR THE PLANET OF THE APES picks up two years into the combat between humans and the apes. Having toppled Koba in the previous film, Caesar (Andy Serkis) leads his kind, making him the top priority for The Colonel (Woody Harrelson) to find and eliminate. Caesar wishes for the fighting to stop, so when the apes capture some of the enemy, he sends them back as a gesture meant to broker a detente. Instead the intel of where Caesar is invites a slaughter of many he’s been trying to protect.

Caesar sends most of the survivors toward a new home while he intends to exact revenge on the Colonel. Rocket (Terry Notary), Winter (Aleks Paunovic), and Spear (Alessandro Juliani) refuse to let him go alone. On their search they take pity on and add to their group a mute girl given the name Nova (Amiah Miller). They also come across former zoo animal Bad Ape (Steve Zahn), who knows where the Colonel and his men are stationed and agrees to show them.

Beginning with 2011’s RISE OF THE PLANET OF THE APES, the rebooted series has always had dark clouds looming over it because the original films provide the roadmap for where the new ones will arrive. They’ve become progressively darker and now reach the exceedingly grim WAR FOR THE PLANET OF THE APES. What gets depicted is restrained enough to stay within the confines of a box office-maximizing PG-13 rating, but what happens is pretty horrific regardless of which side comes out on top. Tragedy builds upon tragedy to the point that by the time this aggressively feel-bad film concludes I left the theater hoping the sun hadn’t been extinguished in the interim. WONDER WOMAN features its share of darkness, but at the core it prizes earnestness, decency, and love over fear, nihilism and hatred. It’s unfair to WAR OF THE PLANET OF THE APES, but I’m seeking more of what WONDER WOMAN is promoting at this point in time.

Perhaps I was just in the wrong mood when I saw WAR FOR THE PLANET OF THE APES. It’s a marvelous technical achievement that the number and variety of simians are so convincing that it’s taken for granted that they are real. Although Zahn’s Bad Ape probably belongs in a more lighthearted film, the provides comic relief and a much-needed glimmer of fun. Director and co-writer Matt Reeves lingers on the breathtaking scope of the landscapes being traversed and occupied. The action scenes are brutally effective. The film’s allegory about humanity’s penchant for mutually assured destruction hits hard in the context of the daily news. But WAR OF THE PLANET OF THE APES is such an oppressive film to watch. Plus, there’s the sneaking suspicion that its purpose is just to advance the series to where we knew it was eventually headed.