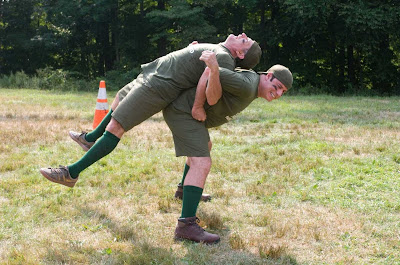 OLD DOGS (Walt Becker, 2009)
In OLD DOGS longtime best friends and sports marketing partners Charlie (John Travolta) and Dan (Robin Williams) end up with unfamiliar seven-year-old twins in their temporary custody. Zach and Emily (Conner Rayburn and Ella Bleu Travolta) are the product of Charlie's persuasive plan of getting Dan to spend a single night out of town indulging in heavy drinking and other divorce-forgetting behavior. Seven years later, when Dan tries to rekindle something with his old one night stand (Kelly Preston), he learns that he's a dad.

Through an incredibly convoluted series of events, including the kids' mother having to do a short stint in prison and their hand model intended caretaker (Rita Wilson) being incapacitated, Dan offers to watch them while his firm deals with winning its biggest potential contract ever. Surely nothing can go wrong when two hopelessly unqualified guys try to babysit two unknown children while attempting to broker a deal with Japanese businessmen, right?
The old dogs of the title may refer to the not quite senior citizen leads, but it's a more apt description of the shopworn and laughless jokes occupying this woofer of a comedy. The threadbare screenplay is stitched together from the worst and most clichéd ideas to emerge from--and should be discarded during--a brainstorming session. 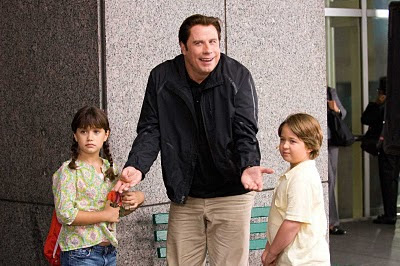 The immediacy with which the telegraphed punchline for each joke and scene arrives is enough to make Samuel Morse envious. The embarrassingly broad performances in OLD DOGS contain more ham than a grocery's meat department at Easter.
It's one thing to make an attempt and not succeed, but OLD DOGS doesn't muster genuine enthusiasm to give its best shot. Rather, director Walt Becker and the cast take the musty material and lack of a through line and play it to the rafters in the hope that no one will notice how vacant the film truly is.
OLD DOGS unspools like MRS. DOUBTFIRE in reverse. Extraordinary means are used to put the kids in close proximity to Williams' character. He is then supposed to bond with the lovable tykes, but the clanging and incomplete mechanical structure can't even support this feeble story. OLD DOGS needed to be put down before a frame was shot, especially when letting it linger on and become this product is thoroughly humiliating for everyone involved.
Grade: D-
Posted by Mark Pfeiffer at 11/25/2009 04:30:00 PM No comments: 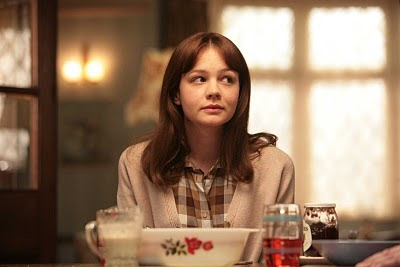 AN EDUCATION (Lone Scherfig, 2009)
AN EDUCATION'S sixteen year-old Jenny (Carey Mulligan) is a very clever girl and she knows it. Jenny peppers her conversations with French phrases and imagines what awaits her beyond the suburban London home of her working class parents in 1961.
One rainy afternoon after orchestra practice Jenny meets David (Peter Sarsgaard), a friendly man driving a maroon sports car. He offers to give her cello a ride home so as to protect the instrument from the elements. Easily charmed and flattered by this handsome older fellow, Jenny eventually hops in the car beside him and quickly bonds with the stranger.
Despite their age difference, David persuades Jenny's parents that spending time with her, such as taking her to a concert in the West End or to Oxford overnight, is all about broadening her knowledge and making important connections.
AN EDUCATION showcases several fine performances in this story about the dangers of youthful cleverness. Jenny isn't as worldly as she feels she is, and Mulligan, in her first major role, does keen and sensitive acting to peel back the effects of the schooling the character gets in prizing her own intelligence to a fault. 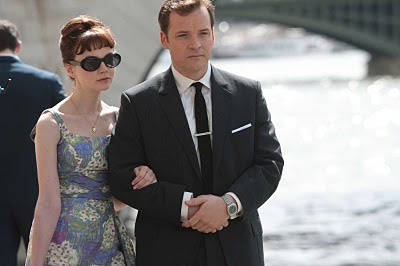 Jenny may think too highly of herself, but what teenager, especially a smart and studious one, doesn't think she has everything figured out? The naive confidence with which Mulligan plays the part is what makes Jenny's awakening to reality so heartbreaking and what makes her so attractive to David.
Sarsgaard excels as a smooth operator whose words and behavior around Jenny and her family misrepresent his true intentions. One's sixth sense suggests there is something creepy about him, yet he appears perfectly respectable.
While the title of AN EDUCATION refers to the instruction Jenny receives, it applies just as well to the lesson given to her father Jack (Alfred Molina). While suspicious, Jack permits himself to be persuaded by the elegantly enticing David because he believes the stranger can give his daughter social and economic advantages. Molina exudes love for his on-screen daughter and misguidedly acts in what he thinks are her best interests.
In the hands of director Lone Scherfig and screenwriter Nick Hornby, Lynn Barber's memoir is treated with a youthful innocence rather than an adult's experience and perhaps jadedness. It's a critical distinction because taking an older view of this story would taint how it is observed and reconciled. AN EDUCATION has sort of an abrupt climax to resolve the question at its center, but overall the cast and crew are graceful in telling this coming-of-age story.
Grade: B+
Posted by Mark Pfeiffer at 11/23/2009 05:41:00 PM No comments:

Precious: Based on the Novel 'Push' by Sapphire 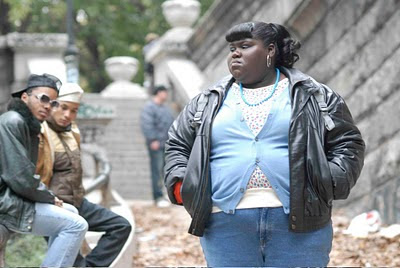 PRECIOUS: BASED ON THE NOVEL 'PUSH' BY SAPPHIRE (Lee Daniels, 2009)
PRECIOUS: BASED ON THE NOVEL 'PUSH' BY SAPPHIRE features newcomer Gabourey Sidibe as sixteen year-old Claireece "Precious" Jones. Precious is obese, illiterate, and still in junior high school. The Harlem teen is also the single mother of a mongoloid daughter cared for by her grandmother and carrying another child. Both pregnancies are the result of being raped by her father.
As if those aren't enough hardships, Precious' welfare-scamming mother Mary (Mo'Nique) abuses her. Precious catches a break when her expulsion from the public school leads her to an alternative school, where she the teacher Ms. Rain (Paula Patton) takes an interest in her. Also concerned with Precious' toxic home life is a deglamorized Mariah Carey as social worker Mrs. Weiss.
Although PRECIOUS is not as mawkish or dreary as the plot description makes it sound, director Lee Daniels and screenwriter Geoffrey Fletcher have a bad habit of smacking the protagonist and, by extension, the audience upside the head with more punishment than is necessary. The film is at odds to tell an inspiring story and confirm the hopelessness of the situation. 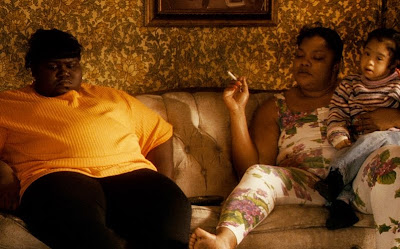 Precious' turbulent life presents ample problems for her to overcome, yet the film keeps finding new ways to extract pain from her circumstances. PRECIOUS isn't poverty tourism, but in the effort to evoke gritty realism, the filmmakers overdo it.
PRECIOUS also suffers from the shifts between the main character's internal monologue and the film's desire to initiate a larger conversation about girls like her and the portrayed community. This inconsistent character study succeeds when conveying Precious' self-image, how she views her dire conditions, and what she dreams of. Sidibe's naturalistic performance and the intermittent fantasy sequences reveal the humanity in the sort of character and person who is usually overlooked, if not purposefully ignored, but attempts to extrapolate this individual experience to a general group lack support.
Daniels employs a throw everything at the wall to see what sticks directorial style that makes PRECIOUS compelling viewing, but predictably, his shotgun approach lacks focus. Most critically, PRECIOUS veers off track at the end when Mo'Nique gets a showcase scene with Precious and the social worker. The scene is emotionally loaded, but upon inspection it makes no dramatic sense and doesn't end with the sort of uplift it pretends to have.
PRECIOUS can be funny and deeply felt. Unfortunately, like those people surrounding the character, it loses sight of the character.
Grade: C
Posted by Mark Pfeiffer at 11/20/2009 05:20:00 PM No comments: 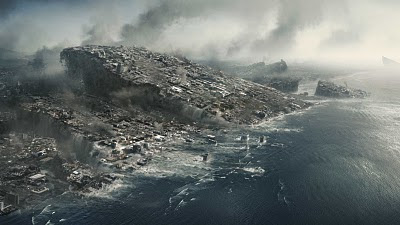 2012 (Roland Emmerich, 2009)
With Earth on the eve of destruction in 2012, we can't stop the impending apocalypse; we can only hope to contain it. Conspiracy theorists, such as Woody Harrelson as the film's resident nutjob, believe that the Mayan calendar foretells the end of the world on December 21, 2012. Scientists may not put any stock in the predictive power of an ancient civilization, but they notice that the planet is heating from the inside at an alarming rate, which may cause the crust to crack.
Of course, the powers that be don't bother informing the public about the forthcoming catastrophe. Rather, they plan for how to save their own skins and ensure the future of humanity. Failed author turned limousine driver Jackson Curtis (John Cusack) happens to be in the right place at the right time when hell on earth arrives. Armed with knowledge of a long shot survival option, Jackson scrambles to save his former wife Kate (Amanda Peet), kids, and their stepdad.
As INDEPENDENCE DAY and THE DAY AFTER TOMORROW demonstrated, 2012 director Roland Emmerich was already proficient at destroying the world's landmarks and land masses for vicarious thrills. In wiping out most of Earth's population in 2012 he takes his filmmaking as ant colony stomping approach to a new level. Fortunately the faceless nature of the mass casualties keeps this from being the most depressing movie ever. 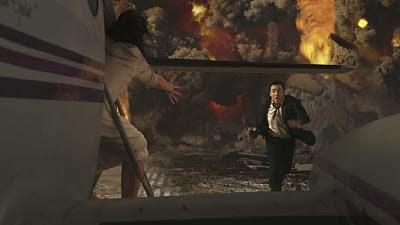 Alternately serious and goofy, 2012 is intended to be a breathless action picture with some sobering moments and a hoot of a comedy. Emmerich would be better off losing the pretense of respectability and embracing the B-movie showmanship that is clearly his strength. Emmerich and 2012 don't do heartfelt emotion and character so well.
The film is padded with a few little stories and one primary tale of the fight for survival, but these lumbering scenes of dialogue and plot generate about as much feeling as reading the names on a company's emergency phone tree. 2012 perks up when catastrophe befalls the planet, but after awhile the repetition of CGI destruction becomes numbing.
Harrelson's pickle munching, paranoid radio talk show host brings some over-the-top humor that this preposterous movie desperately needs, but in terms of tone 2012 follows the lead of its solemn survivors more often than not. Then again, maybe Emmerich is slier than he's given credit for. Punctuating 2012 is the discovery that enduring the possible end of the world cures a little girl's bed-wetting.
Grade: D+
Posted by Mark Pfeiffer at 11/13/2009 05:06:00 PM No comments: