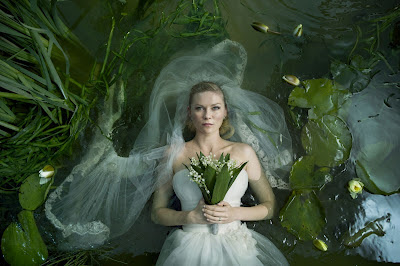 If ever there was a director prepared to make a film about depression and the end of the world, Danish provocateur Lars von Trier would be the one.  His well-publicized battles with depression informed his notorious previous effort, ANTICHRIST, and pervade his latest, MELANCHOLIA.

After a prologue that beautifully envisions a terrible end, MELANCHOLIA splits into two halves, each devoting attention to the sisters Justine (Kirsten Dunst) and Claire (Charlotte Gainsbourg).  Justine has wrestled with depression for a long time, and not even her wedding day, which comprises the film’s first half, can keep her in high spirits.

The title is also the name of a massive, newly discovered planet that had been hiding behind the sun.  Scientists expect its orbit to pass by close to Earth, but in MELANCHOLIA’s second half Claire fears that this heavenly body will smash our planet to bits.

Words associated with depression, like dreary, bleak, and sluggish, aren’t applicable to MELANCHOLIA.  Manuel Alberto Claro’s gorgeous cinematography produces slick, saturated colors in the prologue; warm, deep browns and yellows at the reception; and light and hazy blues and white in the second half.

Considering its subject matter, MELANCHOLIA is quite funny, especially during the wedding reception.  Von Trier, who is likely riffing on fellow Dogme 95 filmmaker Thomas Vinterberg’s THE CELEBRATION, has great fun observing a festive ceremony fall apart.  Udo Kier’s fussy wedding planner, Charlotte Rampling’s grouchy mother of the bride, and a peeved Kiefer Sutherland, who never fails to remind the necessary parties that he’s paying for it all, highlight the prickly humor around this supposedly happy occasion.

While existence hangs in the balance in MELANCHOLIA, von Trier’s fatalistic embrace of impending doom is starkly beautiful and strangely reassuring.  Without question Justine is the director’s surrogate, someone who finds comfort in the awareness that years of despondency and anxiety were not for naught.  Dunst’s remarkable performance conveys the emotional swings and physical effects from her long, internal struggle and the peace she makes with it.  Now that her worst possible fear can be confirmed, what else is there to do but submit to the inevitable?  In a film full of strong images, its final one is most striking for what it says about accepting those things that cannot be changed. 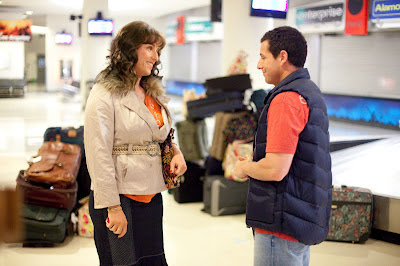 In the comedy JACK AND JILL Adam Sandler pulls double duty starring as Los Angeles advertising executive Jack and his insecure, Bronx-dwelling twin sister Jill.  Even before Jill’s plane has landed in California for her Thanksgiving visit, Jack is counting the hours until she is on a return flight to New York.  He loves his sister, but she gets on his nerves.

To Jack’s exasperation, Jill decides to extend her stay with his family through Hanukkah.  Desperate to get her out of the house and back to the East Coast, Jack figures that the best way to hasten her departure is to find a boyfriend for his sad, single sister.  Luckily and bewilderingly, Al Pacino is smitten with Jill.  This appears to be a coup for Jack, as he might have found a boyfriend for Jill and now has the chance to persuade the actor to star in his pitch for a Dunkin’ Donuts commercial.  Jill, though, is less than impressed with Pacino’s fame, fortune, and affection.

I’ve rarely liked Sandler’s films, especially when he’s working with someone from his stable of directors.  His laziness and worst impulses are left unchecked, allowing the films to disintegrate into formless and laughless vehicles for product placement, ego stroking, and paid vacation.  This year’s Sandler-starring, Dennis Dugan-directed JUST GO WITH IT is a shoo-in for my worst of 2011 list.  With JACK AND JILL bringing the star and director together again, everything was aligned for me to hate it as well. Strangely, I don’t. 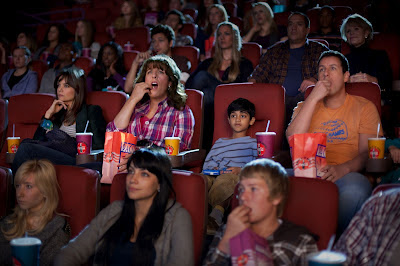 JACK AND JILL certainly suffers from the problems that plague his other movies. Dugan’s filmmaking demonstrates a basic level of formal competence, which is an improvement in this instance.  The corporate contributors are so nakedly integrated that Sandler might as well just pause to show commercials at the act breaks.  At this point it’d be less insulting.  (That said, JACK AND JILL basically does this near the end.)  The immense neediness Sandler’s characters possess gets shifted to him in Jill’s clothes rather than as “himself”, which at least makes it less alienating.  Still, the underlying message remains unconcealed: love me for and in spite of all of these things I hate about myself.

Yet JACK AND JILL yielded more laughs from me than any of his films have in the last seven years.  Is Pacino’s utterly weird performance captivating because he’s debasing himself or giving it his all?  Maybe I’ve finally been worn down, but Jill’s grotesque characterization goes in one end as deeply unfunny and comes out the other as relatively amusing and, dare I say it, charming.  Her enthusiastic requests for twin time with Jack and general cluelessness let Sandler play up the lowbrow comedy he favors without being as mean or angry as he can be.

The charge is leveled at Jack that he’s bitter and cynical, which seems like a pointed self-critique for Sandler to acknowledge.  Like the actor’s least ambitious films, JACK AND JILL’s lack of energy disguises contempt, but here he’s working through his issues in a more compelling way than usual. 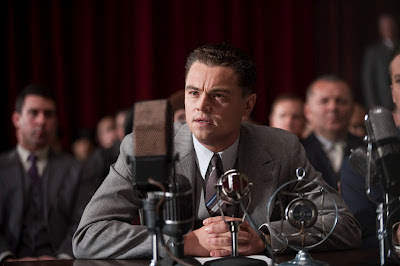 In the biographical picture J. EDGAR director Clint Eastwood and screenwriter Dustin Lance Black track the career of the longtime Federal Bureau of Investigation director.  Leonardo DiCaprio stars as J. Edgar Hoover, a morally certain man who improved and expanded the once-Bureau of Investigation’s ability to fight crime, although not without amassing his share of detractors.

Hoover rose to the top in 1924, saw the agency become federal in 1935, and stayed until his 1972 death.  The legality of his methods, not to mention his secret files, made him powerful and controversial.

Framed by the head G-Man dictating his memoir, J. EDGAR has a lot of territory to cover and does so swiftly.  The Palmer raids, the Lindbergh baby abduction, and the relentless pursuit of gangsters and political subversives are tied together in a fleet, often exhilarating yarn of a righteous man who will not rest until he has stamped out all criminal and radical elements.  Hoover is clear and authoritative when recounting his accomplishments, yet J. EDGAR questions how reliable of a narrator he is and at what cost such unyielding professional striving did to the individual and the nation.

The successful but petty and vindictive man at the center of J. EDGAR is as much a mystery as what he kept in his confidential files.  Eastwood and Black give Hoover credit where it’s due, especially in the admiration for his organizational rigor and faith in scientific evidence as a valuable tool.  The speculative private life they give him, in which he and associate director Clyde Tolson (Armie Hammer) share a closeted and presumably unconsummated relationship, goes a long way in humanizing a man who would ride roughshod over the livelihoods of his subordinates and perceived enemies.

DiCaprio does marvelous work portraying a man who, frankly, seems like he would have been unpleasant company, even to those long loyal to him.  Hoover’s magnetism derives from his intellect, certainty, power, and sense for myth-making, and DiCaprio bears that out with a performance of a man who himself may be constantly performing as though he has nothing to hide.  Hammer’s Tolson seems in awe of and puzzled by his friend and co-worker.  Hoover’s longtime secretary Helen Gandy (Naomi Watts) demonstrates great respect and empathy even as she appears not to understand this man she’s know for decades.  Something must have earned their dedication.  That mystery is what encourages looking even closer at this blank slate of a person.

Where is the line that separates a prophet from a madman?  For Curtis (Michael Shannon) in TAKE SHELTER, his vivid delusions and hallucinations of an impending storm have him struggling to ascertain if he is foreseeing danger or losing his mind.  Now in his mid-30s, the Elyria, Ohio construction worker is at the age when his mother was diagnosed with paranoid schizophrenia.  While he takes steps to address the potential onset of mental illness, Curtis doesn’t discount his dreams either.

Curtis doesn’t want to worry his wife Samantha (Jessica Chastain) with the burden of what he is seeing, not when she already has their hearing-impaired daughter Hannah (Tova Stewart) to care for and a house to keep.  For a time his actions don’t suggest anything significant is wrong, but she can’t overlook his gradually strange behavior and fixation on the backyard storm shelter.

For a husband and a father the needs to provide and protect are paramount.  Curtis’s visions motivate him to fulfill the role he has been capably serving, but the nightmares also put at risk his ability to be in the family.  If he is experiencing an emotional disorder’s blossoming, then he is speeding toward the ruination he is working so hard to prevent.

In an outstanding performance, Shannon portrays this conflict with great sensitivity and control.  He’s played his share of characters with some faulty wiring, but this role is more down to earth than the colorfully disturbed individuals he’s been in BUG, REVOLUTIONARY ROAD, and MY SON, MY SON, WHAT HAVE YE DONE.  In TAKE SHELTER Shannon conveys the quiet torment that prods Curtis’s worst fears while he does his damnedest to keep it together for those he loves. When the pressure can no longer be contained, the slow boil of a performance explodes in a spectacular scene at a Lions Club fish fry in which he releases what are either the ravings of an ill person or the impassioned warning of someone who spots trouble on the horizon.

TAKE SHELTER writer-director Jeff Nichols takes great care in detailing Curtis’s journey and surrounding him with concerned loved ones.  Chastain’s deeply empathetic work displays the anguish that a spouse goes through in supporting a partner who may not be well.  In his single scene Ray McKinnon makes an impression as Curtis’s older brother Kyle.  His visit to Curtis’s home and their subsequent conversation tiptoes around the main subject, as men will often do, but the message Kyle sends and what he observes shows genuine worry.

Nichols keeps the narrative taut by not tipping off whether the protagonist is rational or not until the very end, although the answer may be more oblique than it appears. What matters is following the progression of Curtis’s mental dilemma and feeling the strain that comes from agonizing over a man’s capacity to do right by his family.