Fundamentally UPSTREAM COLOR relates to the indescribable attraction that brings two people together and the wounds and common ground in their history, but storywise it’s a whole lot more complicated and bizarre than that. A man referred to as The Thief (Thiago Martins) harvests a worm that he puts in a capsule and forcibly gives to Kris (Amy Seimetz). He uses the worm to control her mind and takes her for all she’s worth. After he’s done with her, a man called The Sampler (Andrew Sensenig) comes along to remove the worm and implant it in a pig.  A post-procedure Kris discovers her life in ruins but eventually finds and is drawn to Jeff (Shane Carruth), who may have endured a similar situation.

Although the surrealist and naturalistic influences place UPSTREAM COLOR at the intersection of David Lynch and Terrence Malick, Carruth’s weird poetry of sound and images belongs to his distinct vision. The plot particulars are often indirect and opaque, yet the film is never less than mesmerizing or comprehensible because of its impeccable sculpture. By crosscutting sonic tones and matching visuals, Carruth points out the connections surrounding and linking us regardless of if they are perceived or not. Whether the chains come in the form of looped paper, crocheted yarn, human relationships, or the natural cycle, UPSTREAM COLOR functions like a microscope through which these bonds are acknowledged and examined.

Cracking the narrative code was a great source of gratification in PRIMER, Carruth’s previous brain-busting film, but to get twisted up in what UPSTREAM COLOR means is to miss its deeper pleasures. Here the complexity and strangeness work toward conjuring the ineffable to elicit emotional responses. For such an abstract film, it offers a tactile viewing experience. It’s about texture rather than text, and the sound design, ambient score, and cinematography enhance the senses to lead to an instinctual understanding of UPSTREAM COLOR’s essence.

This description likely makes UPSTREAM COLOR sound like a cold, intellectual, and impenetrable exercise, which couldn’t be farther from the experience of it. This film is felt more than comprehended. The odd and disorienting science fiction surfaces allow for the emotional undercurrents to break through more easily. Seimetz’s remarkable physical performance contains the pain and anger that come with injury, the wariness of trusting anew, and the ecstasy of love. An entire inner life is made familiar through her.

With UPSTREAM COLOR Carruth employs a novel and thrilling strategy for studying the inexplicable bonds that pull and hold people together, the shared joys and concerns that transform us as individuals and couples, and the past hurts that need to be absorbed into our identities rather than removed or disregarded. 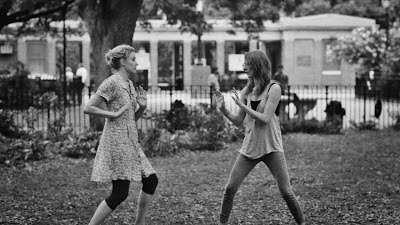 A judgmental person would probably tell directionless 27-year-old Frances (Greta Gerwig) that she ought to get her act together, but she manages to get by even though she still hasn’t carved out much of a career or love life like her peers.  She seems generally happy--or at least puts on a brave face--about her apprenticeship at a New York City dance company and holds out hope that her break might be upcoming.  Any disappointment is easier to take knowing she has the support of her longtime best friend and roommate Sophie (Mickey Sumner).

The two pals in FRANCES HA are still on good terms when Sophie tells Frances she doesn’t want to renew the lease for their Brooklyn apartment because she can get into her dream place in Manhattan.  Frances can’t afford to move there, but she’s pleased Sophie has found what she wants.  Still, the change in living arrangements gradually causes Frances to examine what her life is, although reflection tends to come when a particular matter is most urgent, never earlier.

Co-written by Gerwig and director Noah Baumbach, FRANCES HA provides a sharp, fleet, and very funny look at female friendship and the acceptance of adult responsibilities.  Gerwig and Sumner are hilarious communicating in the kind of shorthand that develops between those exceptionally close and expressing the comfort between Frances and Sophie.  Whether it’s their conversational give-and-take or play-fighting, here are two friends who are utterly enchanted that they accept and understand one another on such a deep level.  Films tend to portray friendships, particularly female ones, in terms of competition or utility, but FRANCES HA depicts one that is formed out of equally supportive individuals.  Like any relationship, theirs will experience the occasional turbulence, but it’s easy to believe these two will still be tight decades down the line.  The joy and empathy between Frances and Sophie spill off the screen. 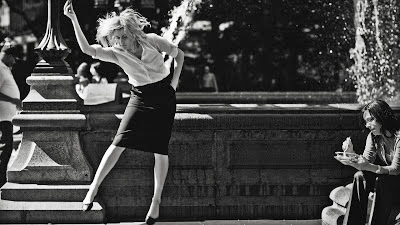 Frances often makes bad but not fatal choices.  She’s perpetually gawky, yet Gerwig’s endearing performance conveys the character’s ease with herself and her mistakes, whether she’s putting her feet in her mouth at a dinner party or falling over them on the sidewalk.  Gerwig’s brilliant stroke is shaping the protagonist’s natural strangeness into something that is uniquely Frances.  She doesn’t exhibit false or manufactured quirkiness but captures the kind of weirdness that’s different for but specific to everyone. Behind her owl-like glasses as Sophie, Sumner makes for an excellent acidic complement to the sweet Frances.


Although each character in FRANCES HA comes from some level of economic privilege, money is something constantly at the forefront of Frances’ mind.  She isn’t completely broke but is highly conscious of what’s in (or absent from) her bank account. Baumbach uses the locations and space to remind of her financial reality, as being aware of one’s surroundings can be as indicative of status as checking one’s balance.