G.I. Joe: The Rise of Cobra 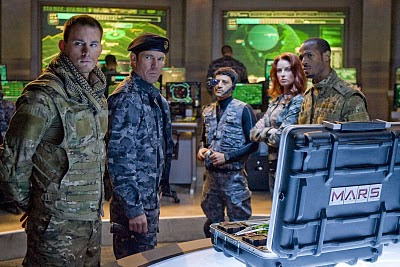 G.I. JOE: THE RISE OF COBRA (Stephen Sommers, 2009)
In G.I. JOE: THE RISE OF COBRA, the titular Joe isn't a real American hero but an international force of special operatives fighting to keep the world safe. Arms manufacturer James McCullen (Christopher Eccleston) has created warheads containing nano-mites that gobble metal. He sells four of the weapons to NATO but intends to have The Baroness (Sienna Miller) steal them back.
American soldiers Duke (Channing Tatum) and Ripcord (Marlon Wayans) are on the delivery mission when the G.I. Joe team comes to their aid. Once the missiles are safe, Duke and Ripcord are free to go, but they decide to stick around, earn spots as Joes, and work to bring down McCullen. 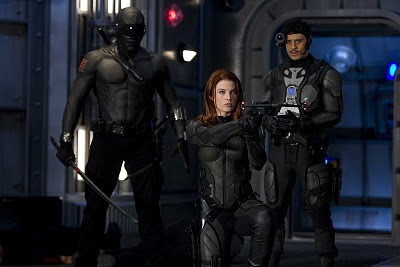 G.I. JOE: THE RISE OF COBRA is like a term paper that fulfills the word count requirement and drops in key phrases to demonstrate some familiarity with the material but is largely filler. Director Stephen Sommers delivers plenty of effects-heavy action sequences, some which work and some that don't, and has a zippy way of coloring in multiple character backstories without bogging the film down as an origin tale. There are worse summer movies based on toy franchises that one could see.
But with scene after scene of whiz-bang combat, G.I. JOE feels insubstantial and lacking in personality. Since it plays more like an introduction to a potential series of films than a self-contained piece, nothing seems to be at stake. With an overpopulated cast of characters, each gets a single defining trait and showcase moment. That's fine for action figures or an after school cartoon, but the film feels unmoored without a dynamic hero leading the way. G.I. JOE: THE RISE OF COBRA is paced well and entertaining in stretches, but it also produces a lot of wheel-spinning until the signature villains finally emerge.
Grade: C
Posted by Mark Pfeiffer at 8/22/2009 01:15:00 PM No comments:

WOW! THE FUTURE OF THE CINEMA HAS BEEN AND FOREVER WILL BE FUNDAMENTALLY TRANSFORMED!

I'm not sure why I decided to put in a ticket reservation for tonight's showing of a preview reel from James Cameron's AVATAR. The offer arrived in my inbox Monday morning, and without thinking about it I went to the site to register.

But why? I don't make it a point to track down every tidbit of information about upcoming films prior to seeing them--I'd prefer to be, you know, surprised--so going to a theater to watch about fifteen minutes from a movie that won't be released until four months from now really doesn't make any sense. I confess, though, that hearing all of the hype piqued my curiosity enough to want to see what is supposedly such a big deal.

Let's get the obvious out of the way upfront. There's no way of telling how well the six scenes and brief montage shown for Avatar Day actually work within the context of the entire film. Seeing the footage in IMAX 3D provides a better gauge of the visuals than a trailer streamed online, but at this point they're just disjointed scenes of pretty pictures.

In the filmed introduction Cameron informed viewers that all of the footage was from the film's first half and contains no spoilers. I have a feeling I know what the film is about, more or less, but I'll keep my trap shut because there's no point in hypothesizing now.

The Avatar Day scenes contain enough exposition to clarify a general storyline, but the most time is dedicated to effects-heavy sequences, which is what those in attendance likely wanted to see most urgently. The avatars' confrontation with some alien animals and the hero's attempt to do something akin to bronco breaking of a dragon-like creature look impressive, but what else is there to say about them?

Correct or not, my initial impression is that AVATAR appears to be a mostly animated film about the long and slender blue cats which serve as avatars for the soldiers and that are also the planet's natives. I've heard a little grumbling about the character design, but I reiterate that judgment should be reserved until the film, not snippets, are seen. My feeling on the 3D is what it always is: 3D injects an inital "ooo" factor and then dissipates.

What's the benefit of the studio doing a national campaign like Avatar Day rather than rolling out this footage at Comic-Con and then putting it online? Beats me. My guess is that anyone who attended these screenings was already committed to seeing the film on December 18. Sure, it snags some preview coverage--I wouldn't be writing about AVATAR otherwise--but is it worth the expense of renting all those IMAX 3D auditoriums nationwide to help get the word out to those who are unaware of the film? Apparently someone thinks so.
Posted by Mark Pfeiffer at 8/21/2009 08:38:00 PM No comments: 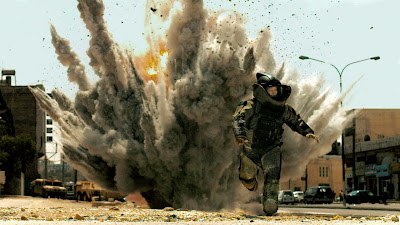 THE HURT LOCKER (Kathryn Bigelow, 2008)
With little more than a month remaining on their 2004 tour of duty in Baghdad, Bravo Company's Sgt. JT Sanborn (Anthony Mackie) and Spc. Owen Eldridge (Brian Geraghty) are hoping to get out of Iraq alive and in one piece. In THE HURT LOCKER a routine but dangerous mission results in a fellow soldier's death. Naturally, the accident unsettles the surviving men in the company, the jittery Eldridge in particular. Bravo Company disarms improvised explosive devices littering the war-torn streets, so very little margin of error exists for avoiding tragic consequences.
The introduction of Staff Sgt. William James (Jeremy Renner) to their ranks does nothing to alleviate Sanborn and Eldridge's uneasiness. James possesses a phenomenal talent for disabling IEDs and staying cool under pressure, but he's also prone to risk-taking that endangers himself and all other military personnel in the vicinity. For James such disregard for protocol is necessary to achieve the adrenaline rush that attracts him to the work and makes him so successful. It certainly helps that he's wired a little differently than other soldiers, but his methods also ratchet up the tension in already stress-filled situations.
Screenwriter Mark Boal based THE HURT LOCKER on his experiences as an embedded journalist with a bomb disposal unit in Iraq. The script's authenticity and director Kathryn Bigelow's cinema verité style pull us into the film with a mixture of awe and terror. The film plunks us among these men performing incredibly hazardous work day in and day out and leaves us with frazzled nerves and appreciation for their service. Viewed purely as an action film, THE HURT LOCKER delivers again and again with tense scenes of IED disarmament and the potential for combat at any moment. The repetition can have a numbing effect, which admittedly works toward the film's purpose of addressing war's addictive nature, but it also causes THE HURT LOCKER to lose some steam toward the end. 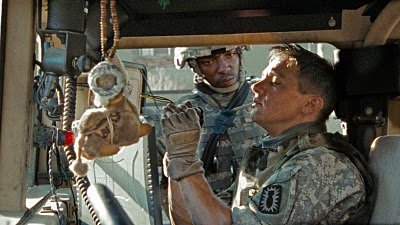 Bigelow's naturalistic direction is critical to maintaining realism and intensity in the action sequences. The camera is often used as if the photographer is alongside the soldiers. When Bravo Company engages in a firefight with insurgents in the wilderness, the camera hunkers down with the men and keeps to a range as far as their equipment permits them to see. This may sound like an inconsequential or restrictive creative choice, but in this instance pinning the camera to a single spot in the rocky terrain is paramount for conveying screen geography and fostering suspense.
THE HURT LOCKER avoids explicit political statements about whether the United States military's presence in the region is legitimate or unjustified. Implicitly positive or negative readings of the film's stance on the War in Iraq probably reflect the beliefs viewers carry into the theater than what's on screen. This isn't a coward's way out for the filmmakers but rather an acknowledgment of the soldiers' reality. THE HURT LOCKER goes to great pains to present the challenges confronting them and how they function. When staring at several bombs that need to be disarmed, philosophical debates about patriotism or warmongering aren't the most urgent things coming to mind.
Grade: B
Posted by Mark Pfeiffer at 8/01/2009 06:17:00 PM No comments: