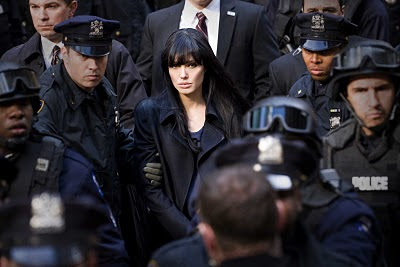 CIA agent Evelyn Salt (Angelina Jolie) learns the hard way that it’s almost always a bad idea to hang around the office to handle a work matter that pops up at the last minute. Salt has her world shaken when Russian defector Vassily Orlov (Daniel Olbrychski) spills the details about a forthcoming day of terror and her complicity in the plot known as Day X.

Orlov spins a wild tale of sleeper agents trained as children during the Cold War, yet the agency’s diagnostic tools indicate that he is telling the truth. The interrogation ends with a bombshell. The Russian president will be assassinated by a sleeper agent named Evelyn Salt.

While her co-worker Ted Winter (Liev Schreiber) considers the accusation to be ridiculous, CIA official Peabody (Chiwetel Ejiofor) insists that Salt be placed in temporary custody. Fearing that her husband may be in danger, Salt executes an escape that serves to make her look more suspicious.

The premise of SALT gets a credibility boost with the recent news of implanted Russian spies being arrested in the United States. Otherwise, thinking too much about the ins and outs of SALT will only highlight how ridiculous the film is.

As a nuts and bolts action movie, this is an entertaining piece of adrenaline-pumping entertainment. While the action can be chopped up a little more than is preferable, director Phillip Noyce weaves together chase scenes and gun battles that allow for greater comprehension of screen geography and practical stunt work. What’s happening in SALT may be implausible, but it’s shot and edited in a way that lets the action be visible rather than unfolding in an impressionist blur of smash cuts and whip pans.

SALT doesn’t spring many surprises, but settling for smartly staged setpieces over twists and turns in an action movie sounds like a square deal. 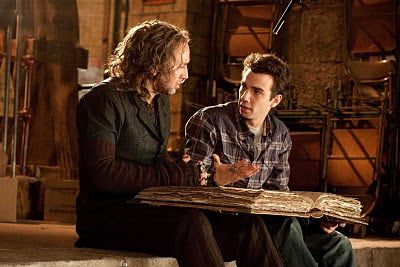 In THE SORCERER’S APPRENTICE Balthazar (Nicolas Cage) has searched for hundreds of years to find the rightful successor to his master Merlin. Balthazar was one of three apprentices to his legendary mentor. When one of them, his friend Horvath (Alfred Molina), joins forces with an evil sorceress and kills Merlin, Balthazar is entrusted with the responsibility of identifying the Prime Merlinian, who will be the proper inheritor of the Arthurian wizard’s powers.

In the year 2000 Balthazar finally stumbles upon him in the form of ten-year-old Dave, but the kid’s training is stalled when he accidentally releases Horvath from the Grimhold, a Russian nesting doll that imprisons evil sorcerers. Due to circumstances too convoluted to go into, flash forward ten years when Dave (Jay Baruchel) is now a physics major at NYU. Balthazar returns and begins training his protege to keep evil magicians at bay.

Whether intentional or not, THE SORCERER’S APPRENTICE plays like Disney’s stalled attempt to launch a stripped down Harry Potter-like franchise. While the special effects are suitably impressive and Cage brings the occasional flourish of oddball humor to the affair, the film as a whole lacks a strong idea of what it should be. In trying to be everything to everybody, it amounts to a fitfully entertaining nothing. 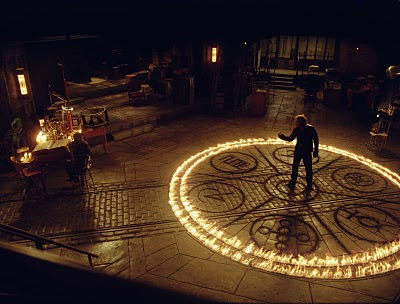 In the best sequence, THE SORCERER’S APPRENTICE calls back to the FANTASIA cartoon with Mickey Mouse that the film draws its name from. Dave uses magic to set the mops into action in the workshop with disastrous results. It’s one of the rare spots when effects, humor, and action work in concert. As for other highlights, a Chinese dragon puppet made flesh and blood and a Chrysler Building eagle turned into an unconventional mode of transportation are a couple of the visual effects technicians’ more inspired creations.

Nevertheless, a little bit of CGI sizzle isn’t enough to hinge a film on these days, especially when it’s so commonplace in big studio movies. As the 20-year-old brainiac Dave, Baruchel can be a nice foil for Cage, but he’s never given enough to work with to allow his twitchy nature from solely defining the character. That awkwardness served Baruchel well in the comedy SHE’S OUT OF MY LEAGUE, but here the trait is too prominent. In theory Dave’s training would be front and center, but it often takes a back seat, especially to a halfhearted romantic subplot about a reunion he has with a grade school crush played by Teresa Palmer.

If magic relies on misdirection, then THE SORCERER’S APPRENTICE knows well enough to be distracting enough to divert attention for awhile. If only there were a satisfying payoff to the feature-long trick. 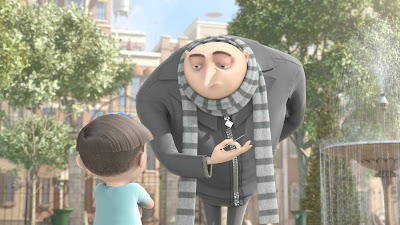 It’s hard out there for a supervillain when someone else snatches the Great Pyramid and thus steals your thunder. For Gru, voiced with a Russian accent by Steve Carell, his competition’s monumental theft is a call to step up his game in DESPICABLE ME.

Gru has his heart set on plucking the moon out of the sky, but first he needs to steal a shrink ray. After all, celestial bodies won’t fit in the overhead compartment. Gru’s crew swipes the shrink ray, but before long it’s in the hands of Vector (Jason Segel), the nerdy nemesis who one-upped him with the pyramid scheme. Gru is unable to breach Vector’s complex and retake what wasn’t his. When he sees that a trio of orphans selling cookies can get in through the front door, he adopts the girls. Becoming a parent brings unexpected consequences, though.

DESPICABLE ME may place a bad guy at the center of the movie, but this is a light and sweet kids’ film that keeps things offbeat and fun because it’s a little naughty. Gru’s furniture is made from endangered species, and he finds joy in the small things, like using his freeze gun to cut in line at the coffee shop. Gru welcomes his adopted daughters into his home by pointing out the sheet of newspaper he’s laid out for bodily functions and the water and candy bowls to sustain them. This slightly inappropriate silliness goes a long way in spicing up what eventually becomes a fairly predictable story about the love of children melting Gru’s heart.

DESPICABLE ME is more of a kick when it indulges its anarchic comedy impulses. After all, the Road Runner and Wile E. Coyote never needed to get sappy. DESPICABLE ME could have stuck to Gru and his minions trying to outwit and outdo Vector. Gru’s little yellow assistants provide a stable of versatile sight gags in their own right and would have permitted the film to cut loose in ways it can’t with child characters in the line of fire.

Animated films have accrued a certain amount of artistic credibility to the point where calling DESPICABLE ME a visually clever cartoon might sound like a backhanded compliment. It shouldn’t. This breezy movie is more fun when it doesn’t worry about saying anything important and lets the zany antics unwind. 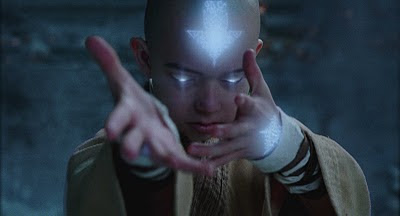 The world is in conflict in THE LAST AIRBENDER as the Fire Nation runs roughshod over the Air, Water, and Earth Nations. The only one capable of restoring harmony is the Avatar, who can bend all four elements. Trouble is, the Avatar has not been seen in one hundred years.

Brother and sister waterbenders Sokka (Jackson Rathbone) and Katara (Nicola Peltz) just might have located this savior when they find and release a boy frozen in an icy bubble that was submerged deep in local waters. Twelve-year-old airbender Aang (Noah Ringer) soon attracts the unwanted attention of the Fire Nation’s Prince Zuko (Dev Patel). The exiled royal has been tasked with delivering the Avatar to his father, Fire Lord Orzai (Cliff Curtis), to restore his honor. As Aang’s exceptional skills are witnessed, speculations run high within the tribes that he is indeed the chosen one.

THE LAST AIRBENDER is swollen with portentous mumbo jumbo and realized in the most simplistic and mundane ways imaginable. From the outset writer-director M. Night Shyamalan piles on mythological gobbledygook that likely only makes sense to fans of the source material, the Nickelodeon animated series AVATAR: THE LAST AIRBENDER. The film mistakes dense backstory for plot and character development and then tries to make it all coherent through terrible dialogue that is over-explanatory yet clear as fog. There’s a distinct George Lucas-like quality to the clunky verbiage and equally stilted performances.

Compounding all of these problems is the realization that THE LAST AIRBENDER is merely table-setting for a potential trilogy. Shyamalan’s stretch of four films beginning with THE SIXTH SENSE and lasting through THE VILLAGE marked him as a compelling artist in command of atmosphere and the twists and thrills of genre filmmaking. With the total bust that is THE LAST AIRBENDER and the hilariously awful THE HAPPENING, he’s making it tough for defenders to stand by his increasingly maligned work.

His strength with visuals remains in portions of THE LAST AIRBENDER yet is notably diminished overall, not the least of which is due to the retrofitted 3D conversion. The largest offense, though, is how exceptionally boring it all is. Who knew an epic martial arts fantasy-adventure could be this tedious?
Grade: D
Posted by Mark Pfeiffer at 7/01/2010 01:34:00 PM No comments: