From Up on Poppy Hill (Kokuriko-zaka kara) 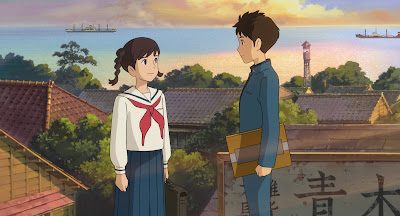 FROM UP ON POPPY HILL (KOKURIKO-ZAKA KARA) (Goro Miyazaki, 2011)


“Was ist das Leben ohne Liebesglanz?”, a quotation from Friedrich Schiller’s WALLENSTEIN’S TOD, is scribbled on a clubhouse wall in the foreground of a late scene in FROM UP ON POPPY HILL (KOKURIKO-ZAKA KARA).  The passage translates as “What is life without the light of love?”  Although the rhetorical question goes uninterpreted on-screen, the sentiment within it informs every moment of the animated romantic drama.


Each morning outside her family’s hilltop boarding house Umi Matsuzaki (Masami Nagasawa) raises signal flags in memory of her father, a captain whose supply ship sank during the Korean War.  The high school junior’s messages aren’t intended for any of the boats in the harbor, but someone passing by on a tugboat notices and publishes a poem about Umi’s daily ritual in the school newspaper.  Needing to devote time outside of classes to maintaining the home for her siblings and lodgers, especially with her mother studying abroad, Umi isn’t used to having attention directed her way.


To her surprise she begins bonding with classmate Shun Kazama (Jun’ichi Okada), who helps run the school paper.  At first she’s unimpressed with the stunt he pulls to draw attention to the pending demolition of the Latin Quarter clubhouse, but his respect for the past impresses her.  In 1963 Japan they stand in opposition to a cultural movement that seeks to move forward by ignoring history and, in some instances, tearing it down in preparation for the Tokyo Olympics.  Umi and Shun spearhead a plan to rally their fellow students to clean up the clubhouse and reveal the dusty, creaky building as a beautiful place worth preserving.


Love is eternal in FROM UP ON POPPY HILL.  It is represented not only in the attraction two people feel when together but also through a gesture intended for someone who has passed.  Love is progress that honors history and nature rather than spreading destruction in the name of advancement.  Dealing with themes familiar in the work of his father Hayao Miyazaki, who co-writes with Keiko Niwa, director Goro Miyazaki guides a sweet and delicate coming of age tale for the main characters and their country after World War II.


The sweep of vintage melodrama is well-suited for the volatile feelings stirred up in teenage romance and a time of national transition, yet for all of the strong emotions elicited in FROM UP ON POPPY HILL, it adopts a determinedly practical mindset about confronting the plot’s obstacles.  Rather than minimizing the stakes, this logical approach enhances the potential tragedy in personal and cultural changes.


FROM UP ON POPPY HILL’s gorgeous animation is devoted to bringing out the subtlety in interactions instead of imagining elaborate setpieces.  Slight variations in expressions carry and expand the emotional current in a manner more associated with live-action films.  Miyazaki’s ability to coax such understated performances out of the drawings and voice acting stands as the film’s major achievement.


(FROM UP ON POPPY HILL is now available in a Blu-ray and DVD combo pack that includes the original Japanese-language track and an English-language dub.)
Posted by Mark Pfeiffer at 9/03/2013 10:47:00 AM No comments: