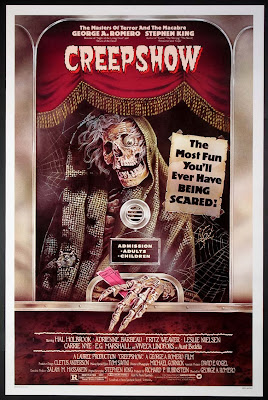 
In sports it’s said that you play the game because having the best team on paper doesn’t guarantee wins.  Adapting the truism for movies, you watch a film because there’s no certainty the end product will be artistically successful no matter how good the assembled talent is.  CREEPSHOW boasts the director of NIGHT OF THE LIVING DEAD and DAWN OF THE DEAD and a screenplay by one of the most popular contemporary horror writers.  George A. Romero and Stephen King’s key roles seemingly assure spooky fun, but the anthology film turns out to be a mediocre effort short on scares and laughs.


CREEPSHOW plays up its 1950s horror comic book inspiration by occasionally setting action within printed frames, including captions, and utilizing page turn and panel wipe transitions.  In the prologue an angry father throws away his son’s horror comic, an action which he suffers for in the epilogue. The film’s five scary and comedic tales ostensibly come from the pages of this disreputable book.

In “Father’s Day” a family awaits the annual arrival of a relative who always visits her dad’s grave on the holiday when she murdered him.  “The Lonesome Death of Jordy Verrill” features the titular hillbilly (King) discovering that he shouldn’t have touched the meteor that landed on his property.  In “Something To Tide You Over” a vengeful husband (Leslie Nielsen) buries his wife (Gaylen Ross) and her lover (Ted Danson) up to their heads on the shore.  Unleashing the terrifying contents of a hidden box from an 1834 Arctic expedition has benefits and drawbacks for two college professors (Hal Holbrook and Fritz Weaver) in “The Crate”.  A ruthless businessman (E.G. Marshall) tries to eradicate the roaches invading his futuristic, supposedly germ-free penthouse in “They’re Creeping Up On You!”


Inevitably some segments will be better than others in omnibus films, but CREEPSHOW stacks the worst entries at the beginning. “Father’s Day” is essentially a long set-up for a gory punchline.  “The Lonesome Death of Jordy Verrill” has a couple amusing touches, like the character’s belief that the local college has a Department of Meteors to purchase his find and a suitably sick conclusion, yet King’s hammy performance obstructs any semblance of terror in the scenario.  Although “Something To Tide You Over” marks a shift toward striking the right balance between fear and dark humor, especially with shots that convey the drowning sensation, it’s padded with unmenacing scenes.


It’s not until “The Crate” that CREEPSHOW finally begins to deliver on the promise of its primary creative forces.  One professor’s fantasies of killing his vulgar wife (Adrienne Barbeau) lack comedic or horrific surprise, but there is a satisfyingly grisly death when a graduate student gets a chunk bitten out of his neck by the hideous monster.  Romero also sustains tension from the simple act of slowly trying to lock a crate.  The segment dallies in the beginning but works overall as a thematic exploration of the darkness that lurks in the hearts of men.


CREEPSHOW largely avoids the broader social concerns in Romero’s other films until “They’re Creeping Up On You!”  The story is built around a cutthroat executive whose wealth allows him to be literally sealed off from society, which isn’t exactly subtle but makes the point effectively nonetheless.  More than the other entries, it taps into consistent creepiness by virtue of those nasty bugs, especially in the punctuating gross-out images.


Although the humor in CREEPSHOW often falls flat, the film’s light touch with horror offsets some of the narrative tedium and predictability.  Two good stories out of five produces the kind of success rate acceptable for baseball batting averages, not movies.  A Romero and King collaboration had potential, but CREEPSHOW is about as frightening as a Halloween sound effects record. 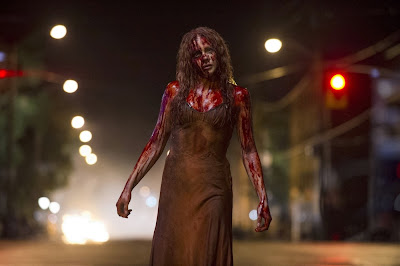 Remaking a film recognized as a genre classic is a tall order for any filmmaker. Although director Kimberly Peirce doesn’t take the shot-for-shot approach for her adaptation of CARRIE, her version is remarkably loyal to Brian De Palma’s 1976 film. Consider it a kind of cinematic karaoke, in which the basic track and lyrics are provided but room for individual interpretation remains.  De Palma got first crack at the Stephen King novel and made his CARRIE in the key of Alfred Hitchcock.  Peirce bases her cover on De Palma’s composition.  While the similarities are hard to deny, the variations construct a conversation between the works a la Liz Phair’s EXILE IN GUYVILLE responding to The Rolling Stones’ EXILE ON MAIN STREET.


A new opening scene with Margaret White (Julianne Moore) giving birth to Carrie and choosing to spare her life marks one of the biggest differences.  The child’s origin is referenced later in the original CARRIE but not depicted within it.  This key departure makes plain the theme regarding fear and confusion about female sexuality.  It also suggests the possibility of the story being viewed from the mother’s perspective, although ultimately that is an avenue not taken.  Moore’s Margaret doesn’t get significantly more screen time than Piper Laurie did in the role, but the character’s arc is more empathetic in Moore’s portrayal even as it’s clear that this is a woman whose beliefs have caused her great anguish.


The plot foundation is virtually the same between the two films.  Loathed by her high school classmates, Carrie (Chloë Grace Moretz) becomes a larger object of derision when she reveals her ignorance regarding the changes to her body during adolescence. Rather than comforting her daughter after the traumatic episode in the locker room, Margaret doubles down on a message of religiously rooted guilt and bolts Carrie into a closet to contemplate her inherent sin.  Carrie rejects her mother’s warped philosophy as a source of strength.   She prefers to hone the telekinetic power within her.


Most of the other girls despise Carrie even more now that they are being reprimanded for viciously teasing her and threatened with suspension, including from the prom, if they don’t follow gym teacher Ms. Desjardin’s (Judy Greer) punishment regimen.  Sue Snell (Gabriella Wilde) regrets her behavior toward Carrie and decides to give up her time at the dance because of it.  She persuades her boyfriend Tommy Ross (Ansel Elgort) to take Carrie instead. Chris Hargensen (Portia Doubleday) refuses to do penance for her treatment of Carrie and, along with boyfriend Billy Nolan (Alex Russell), plots to give the shy girl a prom no one will ever forget.


CARRIE’s examination of teenage cruelty gets updated with a humiliating smartphone video that circulates among the student body, but for all of the potential to illustrate how technology can make an ostracized kid more vulnerable to peer abuse, Peirce’s film doesn’t convey the violation and torment associated with being perceived school-wide as a laughingstock.  Aside from the shower scene, which clashes with the rest of the character’s conception, Moretz’s Carrie seems wise and in control from the get-go. She’s not a meek girl discovering her development but a mostly self-assured young woman who learns to channel her strength, which is a major departure compared to Sissy Spacek’s performance in De Palma’s film.  While Peirce and Moretz are welcome to this put this spin on Carrie, it undermines the protagonist’s trajectory.


Peirce and screenwriter Roberto Aguirre-Sacasa are indebted to Lawrence D. Cohen’s screenplay but make justifiable minor tweaks.  The film benefits from giving Sue a slightly larger role.  Clarifying her motivation and having Tommy defend Carrie in an English class rather than the reverse adds poignancy to the inevitable tragedy.  Ms. Desjardin gets a fairer shake this time around than her analogue did.  Unfortunately the indistinct extreme Christian fundamentalism remains as much of a caricature in the new CARRIE as it was previously.  Taken on its own terms Peirce’s CARRIE holds its own as a coming-of-age drama even as some of the changes weaken the payoffs. 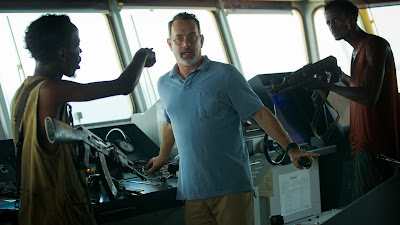 
Based on the true story of a container ship hijacked by Somali pirates in April 2009, CAPTAIN PHILLIPS follows Tom Hanks as the title character as he strives to protect his crew and stay alive through the ordeal.  Vermont-based Richard Phillips picks up the Maersk Alabama in a port in Oman and is en route to Kenya when he spots two boats he suspects are being driven by pirates.  Although he is able to outrun them on the first attempt, another skiff returns the next day with four men who succeed in taking control of the cargo ship.


Their leader is Muse (Barkhad Abdi), a reed of a man who makes a living ransoming ships and their crews for a local warlord.  He promises that no harm will come to the men on the ship as long as everyone follows his orders.  They just want to get paid.  The captain does what he can to stall Muse and his team, but despite the best efforts of Phillips and his crew, the standoff ends with him in the lifeboat with the four pirates as their hostage.  From there the race is on whether the U.S. Navy can intercept them and safely extract Phillips before the pirates reach Somalia’s coast.


Even with the foreknowledge that the hero is delivered from danger, CAPTAIN PHILLIPS plays out as an expert action thriller.  Director Paul Greengrass’ filmography includes the process movies BLOODY SUNDAY and UNITED 93, which use documentary techniques to reveal how real-life events unfolded, and two installments in the BOURNE series.  In CAPTAIN PHILLIPS he combines his skills for authentically recreating historical episodes and investing plot with the awe and breathless excitement of Hollywood suspense and action spectacles.  Regardless of news accounts and Phillips’ book, these endeavors seem barely believable, yet Greengrass stages the hijacking and rescue as convincing evidence of military and technological might..


In his best performance in nearly a decade Hanks disappears into the role of a man thrust into an extraordinary survival situation.  He plays Phillips as always being strategic yet not inhumanly clever considering the circumstances confronting him.  Hanks showcases the character’s tactical flexibility as an extension of the attention to detail his job demands of him.  In this situation he applies emotional aptitude with mechanical calculations.  Hanks seals a terrific performance with a devastating final scene.  His post-stress breakdown highlights his technical ability as an actor, but more impressively, his loss of control conveys the raw feeling triggered in this experience.


CAPTAIN PHILLIPS screenwriter Billy Ray isn’t shy about drawing an equivalency between the American and Somalian captains to reflect on the world economy.  By no means is the film an apologia for hijacking ships, but it asks viewers to consider the financial ecosystem that brings Phillips and Muse together.  The pirate’s decisions are not justified, yet Muse is acting in accordance with the opportunities he has.  Both men are offered jobs and accept them.  One has the advantage of not needing to employ illegal and immoral means to scrape by, but with a shrinking globe, the two become more likely to cross paths.