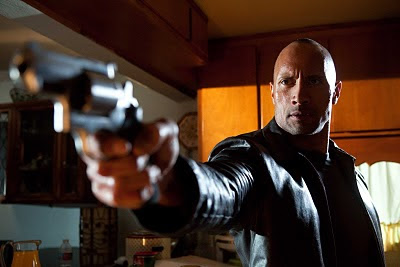 Identified simply as Driver, Dwayne Johnson's protagonist stews during his time behind bars as he plots his revenge in FASTER. The tag references his getaway vehicle driving duty with his brother’s bank robbing crew.

Driver’s skills behind the wheel help them elude the police, but their misdeeds catch up with them when a rival group of thieves invade their home to take the stolen money. They kill Driver’s brother and leave him for dead with a gunshot wound to the back of the head. Miraculously Driver survives the point blank shot and emerges from the injury with a nasty star-like scar, a metal plate, and a prison sentence.

Upon his release, Driver hunts down those who did him wrong and takes justice into his own hands. In pursuit are drug-addled cop (Billy Bob Thornton) and an assassin (Oliver Jackson-Cohen) hired to take out Driver.

If FASTER were made 35 years ago or by the French or Japanese, it would be one of those grimy, long forgotten films you expect Quentin Tarantino to be touting. In the beginning this lean piece of revenge cinema looks like it might be that kind of rough around the edges B-movie whose fun derives from its no-nonsense approach and hard-hitting action. It’s streamlined to the point where most of the main characters don’t have names, just descriptors. 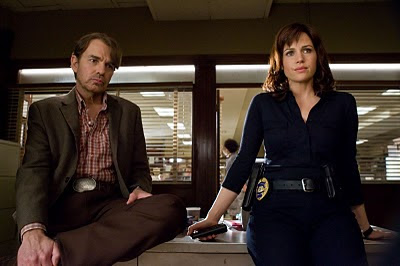 Johnson and Thornton lead a surprisingly strong cast, which also includes Carla Gugino as Thornton’s by-the-books co-investigator and Tom Berenger as the warden. For something that otherwise resembles countless direct-to-video titles, there’s a lot of talent on screen.

FASTER has collected the right pieces, but director George Tillman Jr. and screenwriters Tony and Joe Gayton struggle to assemble them properly. FASTER’S set-up feeds on the guilty pleasure of vengeance, yet it resists giving in to that impulse. The reason for the solemn tone eventually becomes clear and reveals the film to have more going on than expected, but with so much of FASTER dedicated to righteous rage, withholding visceral satisfaction weakens the action and the message.

Muddling matters is the three part structure divided among Driver, Cop, and Killer. The assassin’s scenes seem to belong to another film altogether and merely take away time and urgency from the main story. FASTER also could use a healthy dose of humor to lighten the burdened tone.

Ultimately FASTER is a film at conflict with its own nature. Too contemplative to indulge its pure screaming id and too vicious to be swayed by the bigger philosophical questions it proposes, FASTER doesn’t satisfy the appetite for enlightenment or destruction.

The Next Three Days 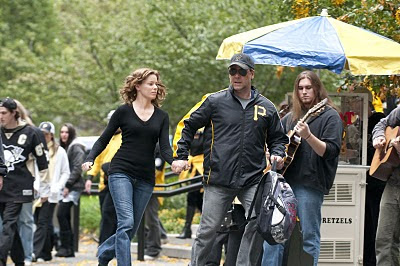 In THE NEXT THREE DAYS John and Lara Brennan’s happy marriage is shattered when Pittsburgh police turn up at their front door one morning to arrest her for murder. Lara (Elizabeth Banks) is convicted to a life sentence, but John (Russell Crowe) holds out hope that the appeals process will ultimately free his wife. Eventually he realizes that the legal system will not overturn her conviction, so he plots to break her out of prison and escape out of the country with her and their son.

John’s singular focus and dogged mission planning propels THE NEXT THREE DAYS for a considerable amount of the running time. He’s a man obsessed with doing whatever he can in the hope of reuniting his family. The film hums from his intensity and the detail-oriented approach, even if it passes along as truth the MYTHBUSTERS-busted technique of using a tennis ball to unlock a locked vehicle.

Crowe delivers a lived-in, no-nonsense performance that has come to define his body of work. Although in comparatively few scenes, Banks is good at conveying her character’s weariness through this ordeal.

THE NEXT THREE DAYS co-writer and director Paul Haggis succeeds at exploring the psychological burdens of this situation while leaving some of the more interesting questions untouched. The audience may take it on good faith that Lara is innocent and wrongly imprisoned, but the film is less clear about that for an astonishingly long time yet doesn’t factor it into the equation. John is warned that he should be prepared to leave his son behind, but that doesn’t feel like a choice the film is ever committed to make.

The bulk of THE NEXT THREE DAYS consists of the build-up to the escape plan, which is probably just as well since this is a thriller surprisingly light on thrills. THE NEXT THREE DAYS mostly works as a dramatic study, but for a movie with a daring prison break, it needs more sizzle in the action. 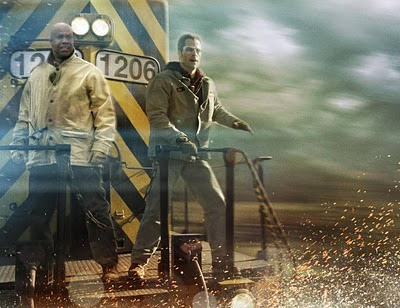 An unmanned runaway train carrying toxic materials speeds across Pennsylvania, and it’s up to Denzel Washington and Chris Pine to stop it in UNSTOPPABLE. Washington is Frank, a longtime engineer, and Pine plays Will, a relatively new conductor with family matters on his mind more than the job at hand. Once they discover that there’s a virtual missile on the tracks heading south toward their hometown, they commit to a risky plan to stop the train.

UNSTOPPABLE takes a simple premise and spins it into an entertaining film surging with pure energy. Director Tony Scott’s manic style is perfectly suited for this propulsive piece of action filmmaking. In addition to its exhilarating speed, UNSTOPPABLE’S efficiency is also an asset. The characters are introduced quickly and provided with a few key details to flesh them out. Washington and Pine are engaged in action hero work, not character studies, so getting the brushstrokes of their backstories is perfectly acceptable. Frank’s near the end of his career, Will’s near the end of his rope. That’s enough. And oh, by the way, they’re trying to stop a speeding train.

The performances hinge on the personalities of the actors, not their character’s origins, and the two leads work well together. Washington’s unflappable nature and Pine’s solemn determination complement each other when things get down to the nitty gritty.

Likewise, UNSTOPPABLE appreciates the spectacle of this tale, but it keeps the stakes high and takes them seriously, perhaps in a tip to its roots as a true story. The film climaxes with an audacious, last ditch attempt to bring the train to a stop that seems all the more exciting because there’s a real engine hurtling down the line.

What’s a supervillain without a superhero?

In MEGAMIND the eponymous evil genius discovers that he has lost his purpose after defeating his square-jawed nemesis Metro Man. Like Superman, the Will Ferrell-voiced Megamind and Brad Pitt-voiced Metro Man are sent to Earth to escape destruction on their home planets. Their paths diverge when a young Metro Man’s pod lands in a mansion while wee Megamind’s is deposited in a prison.

As adults they square off repeatedly, usually due to Megamind’s abduction of TV reporter Roxanne Ritchie (Tina Fey), until Megamind bests his foe. Left to indulge his every whim, Megamind loses his zest for evildoing and schemes to create a new hero so he can get his mojo back.

The blue-skinned, wrong syllable emphasizing Megamind is less immediately sympathetic than Gru from this summer’s DESPICABLE ME. Consequentially, it’s harder to laugh at his diabolical antics. Megamind is established as a figure capable of causing real harm. While the film isn’t as dark as it seemingly sets itself up to be, it suffers from the miscalculation of centering a CGI-animated kids film on what appears to be, at least superficially, The Bad Guy.

Naturally, MEGAMIND tries to sweep this under the rug as fast as possible, but the damage has already been done. MEGAMIND is a visually sleek film, especially when viewed in 3-D. The sparkling, futuristic design combines with terrific depth of field to conjure a world in which good and evil do battle in and above the streets, but the look of the film is the main thing going for it.

MEGAMIND is dramatically and comedically inert. It fails to distinguish itself from other tongue-in-cheek superhero and supervillain cartoons mainly because the characters don’t impress as being all that unique. Simply put, MEGAMIND isn’t funny or interesting enough. 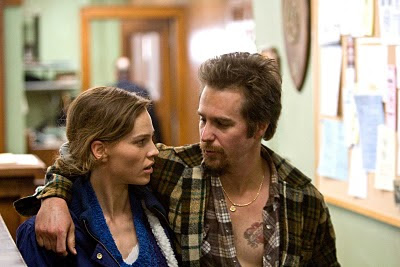 Hilary Swank has gravitated to roles in which her character has a singular purpose and is vigilant in staying on course. In the fact-based CONVICTION she’s found another determined woman to add to her roster. Swank plays Betty Anne Waters, a high school dropout who makes it through a rough upbringing with her brother Kenny (Sam Rockwell).

Kenny has his share of encounters with the Ayers, Massachusetts police, but things get serious in 1980 when he’s brought in for questioning about a local murder. Three years later he is convicted of the crime despite his protestations of innocence. Betty Anne believes her brother and vows to get all of the necessary education to prove that he didn’t do it, no matter how long it takes.

CONVICTION’S title refers more to the dedication of Betty Anne Waters than the judgment rendered against Kenny. The film isn’t anything fancy and doesn’t contain much in the way of surprises, but it wields an enormous amount of power in depicting the bottomless love and devotion that a sister has for her brother. After Kenny was convicted Betty Anne earned her GED, Bachelor’s, Master’s, and law degrees and located the key evidence presumed to have been destroyed years earlier. All in all, it took around twenty years for her persistence to pay off.

Swank plays the role with a quiet intensity that beautifully conveys the selflessness and personal cost that such an endeavor must require. Director Tony Goldwyn and screenwriter Pamela Gray don’t shy from showing the toll Betty Anne’s decisions have on her life, but like Swank, they don’t oversell the sacrifices or thickly apply sentimentality.

This unassuming film features a moving story that’s well-told and well-performed. Instead of concerning itself with slick legal maneuvers and courtroom grandstanding, CONVICTION is unashamedly straightforward in showing how a lot of hard work and sheer willpower was able to correct an injustice.