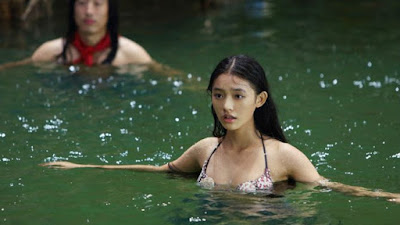 Like the mythical half-human, half-fish, THE MERMAID (MEI REN YU) combines two dissimilar species to create something rarely seen. Director Stephen Chow, known best in the United States for SHAOLIN SOCCER and KUNG FU HUSTLE, takes his brand of broad comedy and merges it with social concerns regarding the environment and conspicuous consumption. The transitions between message boosting and silliness can make for some jarring shifts. Opening shots of devastation to land, water, and animals are followed by an over-the-top scene of a fraudulent museum of exotic animals being run out of the owner’s apartment. The result is like alternating graphic portions of the documentary THE COVE with goofy gags. While the beginning and the climactic fight between men and mermaids take some disorienting sharp turns, Chow keeps this unusual amalgamation of moral imperatives and comedic hijinks from becoming heavy-handed.

When playboy businessman Liu Xuan (Deng Chao) purchases nature and wildlife reserve Green Gulf, it does not seem like a sound investment, but he is using sonar transmitters in the surrounding waters to drive away the dolphins and other marine life, thus enabling reclamation that will yield huge profits. In THE MERMAID some of the creatures in the sea, now forced to reside in a rusting freighter, are determined to fight back. The half-human, half-fish population assigns Shan (Jelly Lin) to seduce their nemesis so that she or the others can get close enough to kill him.

Shan’s sweet disposition makes her an unlikely temptress and assassin. As she and Liu Xuan begin to fall in love, it becomes more difficult for her to carry out the order to end his life. Liu Xuan’s business partner Li Ruo-lan (Zhang Yu Qi) has romantic interest in him, so she doesn’t like that Shan appears to have captured his heart and might be changing his mind about development plans for Green Gulf. Although Liu Xuan is gradually becoming aware of the detrimental impact of his actions, half-man, half-cephalopod named Octopus (Show Lo) still desires to eliminate the person responsible for all of his kind’s suffering.

Chow brings a cartoon’s sensibility to much of THE MERMAID’s humor. Shan’s initial attempt to assassinate Liu Xuan with sea urchins or stab him with a crudely made dagger is beautifully choreographed as her actions are thwarted through unseen obstacles and unexpected movements. A riotous scene with Liu Xuan trying to convince the police that he was abducted by a mermaid feels like something out of Looney Tunes with Bugs Bunny as a sketch artist teasing the victim. THE MERMAID gets a lot of laughs out of all the wrong ways to draw something half-human and half-fish.

As a live-action film with assists from iffy visual effects, the film’s comedy sometimes plays as being more sadistic than it might in an animated movie. A romantic spin on an amusement park ride results in Shan and Liu Xuan barfing even as they’re enjoying the time together. Octopus disguises himself as the lovers’ chef so he can kill Liu Xuan but ends up having several of his tentacles seared, chopped off, and ground because the other cooks mistake them for the meal’s ingredients. The pained reactions to the trauma that Octopus tries to hide are very funny even as the comedic violence is made more concrete than is ordinary. Chow demonstrates playfulness as he pushes the humor slightly beyond the limits of what an audience might anticipate. THE MERMAID’s boldness and mix of tones can make for some awkwardness, but the anything goes attitude is responsible for the heights it reaches.

Kubo and the Two Strings 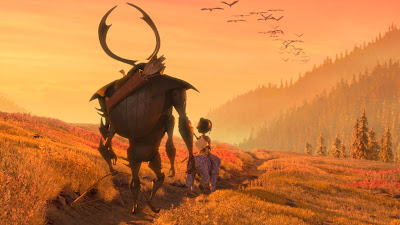 Childhood for the one-eyed boy named Kubo (Art Parkinson) is magical and mystifying in the stop-motion animated KUBO AND THE TWO STRINGS. He brings origami to life as he tells enchanting stories to the villagers near the cave where he and his mother are hiding out. Kubo can shred his three-stringed musical instrument, a samisen, like MAD MAX: FURY ROAD’s Doof Warrior, although no fire shoots out of the neck. While these are marvelous skills for a kid wield, there is much for him to be concerned about. His mother is ill, and and his grandfather, the Moon King (Ralph Fiennes), has killed Kubo’s samurai father and is responsible for the eyepatch the boy must wear. Kubo’s mother insists that he always carry a monkey totem and be home before sundown lest her two sisters (Rooney Mara) and the Moon King find them and complete the task they did not finish.

One night Kubo stays out past his curfew with the predicted tragic results. The Sisters torch the village and try to harm Kubo, but his mother uses her magic to save him and send him on quest. To defend himself from the Moon King Kubo must search ancient Japan for an unbreakable sword, impenetrable armor, and invulnerable helmet. Helping him on his journey are Monkey (Charlize Theron), which is the enlarged totem brought to life, and the samurai Beetle (Matthew McConaughey), a forgetful, wise-cracking insect.

KUBO AND THE TWO STRINGS comes from the animation studio Laika, which, with the films CORALINE, PARANORMAN, and THE BOXTROLLS, has developed a reputation for delivering quality children’s fare that is unafraid of handling material that can be visually and thematically darker. The deep oranges and dark blues dominate the palette for a story steeped in legend, like something witnessed through the flickering flames deep in the belly of a cave. The stop-motion animation provides a tactile sense of wonder at the imaginations tapped to bring this fantastical and early historical world to life in the style of folded paper.

KUBO AND THE TWO STRINGS puts two kinds of immortality in opposition. The Moon King offers Kubo the chance to live forever with him among the stars, although the price to be paid is his one good eye. Alternatively, the boy can find strength and inspiration in the memories of his deceased parents to resist the Moon King and, in turn, survive through generations because of the bravery he shows. This may sound like rather heavy subject matter--and it is, implicitly--but director Travis Knight and screenwriters Marc Haimes and Chris Butler treat this as a grand challenge to be met with the spiritual guidance of his mother and father than an oppression heaped upon a protagonist unsuited to deal with it.

The film is not left wanting for humor, however. Theron’s voicework reveals a delicacy in the figure entrusted to assist Kubo, but she also brings a sarcastic edge to Monkey, especially as she clashes with Beetle. At face value McConaughey seems like a curious casting decision, as he makes no effort to alter his Texas drawl, but the warmth and orneriness in his voice serves the act-before-thinking character well. The love-hate dynamic between Monkey and Beetle produces some amusing sparring. Likewise, Kubo’s journey encompasses the spectrum of emotion, concluding with a beautiful testament to the ties that bind. The importance of family is hardly a new theme for children’s entertainment, but the gentleness and unsentimentalized handling of it in KUBO AND THE TWO STRINGS allows the idea to be seen anew. 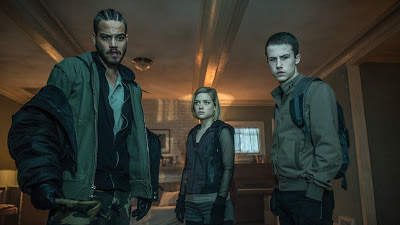 Rocky (Jane Levy), her boyfriend Money (Daniel Zovatto), and their friend Alex (Dylan Minnette) keep cash in their pockets by breaking into houses and committing small thefts in the Detroit area in DON’T BREATHE. Alex’s father runs a home security company, so the three thieves know how to disable the systems and have access to keys for the properties they target. Rocky and Money are eager to skip town for California but need a big score to make that possible.

Rumor has it that a blind Gulf War veteran (Stephen Lang) has squirreled away a large amount of cash from a lawsuit over his daughter’s wrongful death in a car accident. The blind man lives alone in a neighborhood that has been otherwise abandoned. From scouting his place, it appears that he doesn’t leave very often, which would be a problem for them in almost every other instance. Ordinarily they wouldn’t rob a residence when someone is in it, but based on the homeowner’s visual impairment and the supposed $300,000 waiting to be taken, they decide it is worth the risk. Things don’t go according to plan, though. The blind man becomes aware of the intruders in his home and locks them in with the intention of killing them.

Although the blind man’s home has numerous points of egress, director and co-writer Fede Alvarez does nimble work in eliminating escape routes for the thieves to maintain the tension. When they find what seems like a sure way out, the option is inevitably removed for a sound reason. Alvarez treats the house as a labyrinth whose dead ends also contain some unwelcome surprises. Rather than battering the audience with lots of quick cuts and a clamorous soundtrack, DON’T BREATHE provides space via longer, smooth shots to let the dread-raising hunt develop and through the quiet stillness necessary for the hunted to avoid detection.

For all of the solid effort put into sustaining a high degree of uncertainty regarding who will endure the ordeal, DON’T BREATHE’s brief, in media res opening seems like a significant dramatic mistake. With the limited number of characters trying to flee the house, revealing one of those who will survive at least close to the film’s conclusion reduces much of the guesswork and thrills related to this person’s path to that point. It isn’t a fatal error, as Alvarez is skilled at conveying the urgency of individual moments, but the choice seems misguided in view of the care put into the thriller’s suspenseful design.

Although DON’T BREATHE features no conventional heroes, Lang’s blind man is, without question, the villain. The character already is at an advantage by knowing the layout of the house, and with some scenes occurring in near or total darkness, his blindness can serve as an edge he holds over his prey. Lang’s rippling arms and intense demeanor solidify his position as the predator. The thieves, while clearly on the wrong side of the law, are in over their heads. Levy in particular registers the terror of the situation and the instinctive will to live beyond the traumatic experience. The requirement to hint at potential sequels is a lamentable staple of the genre--continuing this story seems like a fool’s errand--but it doesn’t undermine the scares DON’T BREATHE musters.