Guided By Voices No Longer 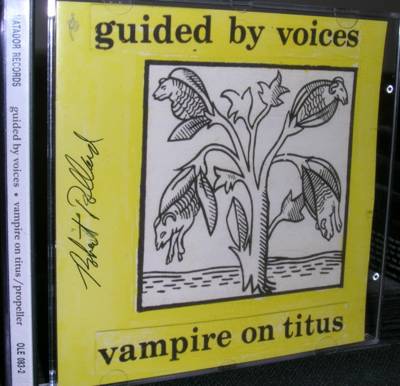 My signed Guided By Voices Vampire on Titus/Propeller CD

Thursday night Guided By Voices played their farewell Columbus show at the Alrosa Villa. Despite being a big GBV fan, I didn't go to the concert. It was a simple matter of mistakenly thinking they were playing next week, which would have made for a busy three evenings since I'm seeing R.E.M. in Cincinnati and a Q&A with Claire Denis at the Wexner Center.

I first saw Guided By Voices in 1994 at Special Occasions in Dayton. I seem to recall that the venue had previously been a restaurant and was being operated by Trader Vic, a local record store owner. It wasn't a big place or a natural performance space, but the concert was something of a musical revelation. I knew of GBV from articles in the Dayton Daily News and sampling their VAMPIRE ON TITUS/PROPELLER album at area record shops. Their story was a good one then (and still is). The band had gone through (and would go through) many permutations while making a bunch of four track recordings at their homes. Lead singer Robert Pollard, the GBV mastermind, was a local elementary school teacher.

So here were these "older" guys, especially for a mostly unknown rock band, pumping out rough sounding pop nuggets reminiscent of classic Beatles and The Who. GBV played very short songs--four minutes would have been epic length--punctuated with a fair amount of noise that gave their live performances the lo-fi sound found on their records. I hadn't heard anything like it and was hooked. I also got Pollard to sign my copy of VAMPIRE ON TITUS/PROPELLER, a nice memento of the evening unlike the mild tinnitus I still have in my right ear. (Wear those earplugs kids!)

Little did I know at the time how prolific GBV was. In an age when most bands release albums every two or three years, Guided By Voices has been an exception. Just take a look at their huge discography. I became a more serious fan after I started using the internet in 1995. There I found out about all of these other albums, singles, EPs, and bootleg live records. I also got onto Postal Blowfish, the fan e-mail list. Obtaining the newest GBV proper or side project release was fun when it wasn't frustrating. Like the baseball card explosion, which watered down the market with anyone and everyone putting out sets, the deluge of GBV releases got to the point where it was hard to keep up with everything.

I remain a fan even if my level of obsession with all things GBV has waned in the last five years. The recent albums haven't matched the greatness of BEE THOUSAND, ALIEN LANES, and UNDER THE BUSHES, UNDER THE STARS, but Pollard has still been doing good work even if it tends to repeat his better days. The concerts are usually a blast, at least when they don't devolve into situations where fans constantly parade across the stage to sing along or when the band is very sloppy (musically and drunk). I found out about Thursday's show in time to go, but with the biggest part of my music collection reserved for one group and a decade of concerts, it didn't seem necessary.
Posted by Mark Pfeiffer at 10/23/2004 09:56:00 AM