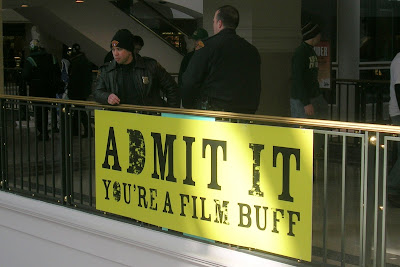 I've played it looser at the festival this year, skipping sessions if I feel I need to and switching what I intended to see. Only one of today's films was originally on my list, but the changes likely paid off.

Since I had seen three of the films playing during Sunday's second round, it was a choice between one thatI had serious reservations about and one that I expected even less from. I disliked director Jamie Babbitt's BUT I'M A CHEERLEADER and thought THE QUIET was one of last year's worst films. That didn't bode well for ITTY BITTY TITTY COMMITTEE. The other option was HERO TOMORROW, a locally made film that may be brilliant for all I know. Fair or not, I'm pretty skeptical about the quality of local films, so ITTY BITTY won out. A colleague didn't like it but gave it a middling review, which was good enough in this instance.

Babbitt, a Shaker Heights native, was on hand to introduce her film. Plastic surgery clinic receptionist Anna (Melonie Diaz) falls in with a feminist group dubbed Clits in Action. The CIA is dedicated to bringing down what they perceive as the phallo-centric nature of the culture. Through guerilla actions, like spray painting and illegal art installations, they challenge the representations of women in the media and advertising, particularly anything regarding female body image.

Punk rock and Day-Glo aesthetics clash in this comic film of self-discovery and political action. The bright colors and slick visuals in the main story are interrupted by DIY music montage sequences in grainier film stock. That disconnect works for ITTY BITTY TITTY COMMITTEE, but the separation between the personal and political themes don't always coalesce. Babbitt isn't always sure if what she's addressing is an issue for women or lesbians. (The CIA members are either gay or curious.) Also, while it's sort of unfair to hold this film to a standard not expected of others, isn't there a little hypocrisy in telling women it doesn't matter what their body shapes are yet casting thin, attractive actresses in almost every primary role?

ITTY BITTY TITTY COMMITTEE does poke some fun at the earnestness of its characters. The CIA gets wrapped up in their wannabe Guerilla Girls activities and the impact they think they're having until they realize that the only people visiting their website are in the group. Where the film falters is in building their largest mission around opposing an anniversary celebration of the Washington Monument. Because it's really a big penis. It's this sort of juvenile attitude passing for political acumen that makes it hard to take the worthwhile ideas seriously.

Babbitt shows drastic improvement from her first two films to this one. It seems that she wants to make sweet, campy movies that have something to say about homosexuality and feminism. She's got the sweetness and campiness down, but she needs help integrating her messages.

And now for something completely different. Based on my negative reaction to LOOKING FOR LEONARD, I changed my mind about seeing Matt Bissonnette's new film WHO LOVES THE SUN. Instead I went to THE RAPE OF EUROPA. Sounds like a barrel of fun, doesn't it?

The doc is concerned with the Nazi plundering of art and cultural treasures during World War II and the measures that museum workers took to safeguard their precious collections. Workers at the Louvre and Hermitage cobbled together evacuation plans to keep their most important items from being stolen. Although decades in the past, the story continues with legal skirmishes waged over the rightful ownership of paintings taken at the time. The sheer volume of artwork the Nazis stole, hid, and destroyed is mind-boggling. In one sense, it's a miracle anything survived.

THE RAPE OF EUROPA also looks at the damage inflicted on architecture during the war and the repairs still being done today. Allied commanders had to decide what they would attack and bomb despite the historic or artistic value of the buildings. Information like this keeps the documentary fresh.

I wouldn't be surprised if THE RAPE OF EUROPA turns up on PBS or The History Channel at some point. It's a solid piece of work that presents a unique aspect about the war. The title suggests a bleaker film than it is. To be sure the loss of life in the war was a greater tragedy, but this film underscores the idea that valuable parts of culture and history were lost too.

With little time to spare, I zipped to the other side of the theaters to catch THE TRACKER. It is screening in the Director's Spotlight sidebar on Rolf de Heer. David Gulpilil of WALKABOUT fame is featured as the aboriginal man leading three men through the outback to find The Fugitive (Noel Wilton), a native accused of killing a white woman in 1922 Australia. The search party consists of The Fanatic (Gary Sweet), a mounted policeman with no regard for the lives of the aborigines; The Follower (Damon Gameau), who's new to the frontier; and The Veteran (Grant Page) drafted to assist.

de Heer elects to depict the violence through Peter Coad's paintings, a technique perhaps more effective than the explicit reality we've come to expect in films. It's still obvious that what The Fanatic does out of righteousness is terrible. If anything, it brings it to attention more because there's little in the way of graphic violence to look past.

Gulplil gives a commanding performance as The Tracker. He's a complex character, one whose actions and motivations are hard to divine. Why would he choose to hunt down one of his own, who will certainly be marked for death regardless of if he is innocent? Is he leading them on a wild goose chase? Through the smallest facial expressions Gulplil suggests a greater intellect than the others believe him capable of and a lifetime of suffering that he laughs away on the surface.

Boasting some outstanding location shooting and a powerful message about Australia's racist past, THE TRACKER was a fine way to bring my first jaunt to this year's festival to a close. There weren't any films I was dying to see at the day's last two sessions. Plus, I was weary enough that the thought of getting home at a decent hour was more appealing.

I kept true to my word to keep from going bonkers by seeing as much as I could. I'm in much better shape than if I'd crammed in films in the seven slots I left empty. I'll be back at it this Thursday through Sunday.