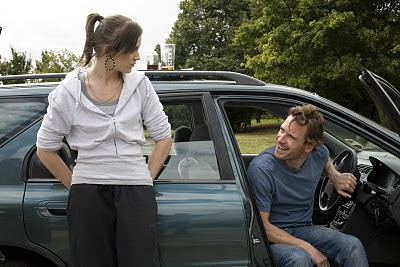 FISH TANK'S 15-year-old Mia (Katie Jarvis) has a chip on her shoulder and always seems to be itching for a confrontation, whether it's with her family, former friends, or strangers. She takes comfort in hip hop and dancing. She dreams of being a B-girl and practices her moves when alone. When her mother brings home new boyfriend Connor (Michael Fassbender), Mia gives him the same attitude she does everyone else. The difference is that Connor shows attention to and respect for her and slowly wins over Mia.

Done in the style known as kitchen sink realism, FISH TANK explores the lower class environment Mia inhabits with an unsparing view. The film's first half is uneventful, but writer-director Andrea Arnold does a fine job depicting the harsh economic and domestic realities Mia must live with. Her mother, who was probably in her mid-teens when she had Mia, acts as though she's still her eldest daughter's age.

Jarvis suggests a softer side to Mia underneath the rough exterior. While Mia is not particularly likable and the grim circumstances don't foretell a happy ending for her, Jarvis' bruised and stubborn performance elicits empathy.

FISH TANK'S second half is much more eventful, fatally so. The film becomes a caricature of arthouse miserabilism, which asserts that the only truths are the ugly ones. The problem isn't that Mia's life gets worse. The natural course of events seems to be leading there. The issue is that the piled up complications become ridiculous and at no greater purpose than to indulge a nihilistic attitude.

Nas' song "Life's a Bitch" accompanies a key scene near the end of FISH TANK and plays over the end credits. Mia has every reason to identify with the lyrics, but the film can't shake that adolescent mindset as it heaps insults upon her.