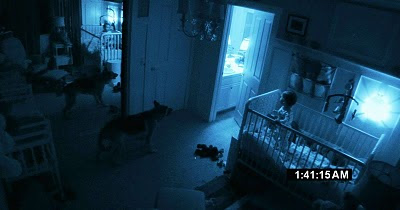 Rather than picking up where PARANORMAL ACTIVITY left off, PARANORMAL ACTIVITY 2 goes back to explain where the demon that tormented Katie and Micah came from and what it wants. This sequel/prequel observes Katie’s sister Kristi Rey (Sprague Grayden) and her family, which includes husband Dan (Brian Boland), stepdaughter Ali, and their infant son Hunter.

One day the Reys come home to find that an intruder has wrecked their house, although the only thing that seems to be missing is a necklace Katie gave Kristi. Sufficiently spooked, they install multiple security cameras, but strange things happening around the house keep Kristi in particular on edge. Unexplainable noises awaken the baby. A pan is knocked from its secured storage spot. The pool cleaner mysteriously is removed from the pool overnight. Over time the disturbances become more aggressive.

Following the series’ conceit of presenting edited found footage, PARANORMAL ACTIVITY 2 consists of house surveillance videos and some interactions caught by camcorder. Much of what’s captured on tape and hard drives is mundane, but it’s precisely the ordinariness and long takes in these scenes that can make them so unnerving when the supernatural element disrupts the tranquility. For instance, watching someone sit at a kitchen island isn’t inherently compelling, but the anticipation of something happening while patiently focusing on the scene pays off with a massive jolt when the cabinets and drawers explode open for no reason.

It’s in this manner that PARANORMAL ACTIVITY 2 consistently succeeds at constructing jump moments with deliberation during routine home settings. The scares in PARANORMAL ACTIVITY 2 aren’t as frequent or always as well built as the original film’s, but those that exist are still pretty effective. In day-to-day life, unseen things that go bump in the night, or the daytime for that matter, have a way of frightening the living daylights out of us. The same applies to the movies.