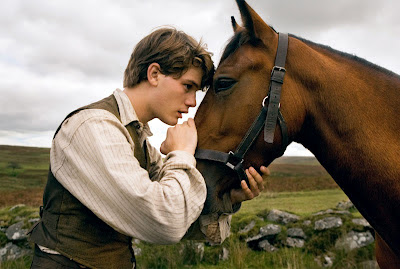 The four-legged protagonist in WAR HORSE is born as a wild thoroughbred, sold at auction to a buyer who must use him to plow fields, resold to the British army, and ultimately serves on both sides in World War I.  The horse named Joey is not intended for working the fields, but that’s what he is needed for when drunken farmer Ted Narracott (Peter Mullan), in a fit of pique, bids up the cost unreasonably high so his landlord Lyons (David Thewlis) will not win the beast.

Ted’s wife Rose (Emily Watson) immediately recognizes the foolishness of such a purchase and insists that he take the horse back.  Their teenage son Albert (Jeremy Irvine) loves the horse and pledges to train Joey to do whatever he must to help the family farm.  Since Ted refuses to back down from his reckless decision, it’s up to Albert and Joey to ready a rocky Devon field for turnips.

Boy and horse succeed when no on expects them to, but their happy time together comes to an end when Ted sells Joey to the British army at the onset of World War I. The officer promises to take good care of the horse, and a tearful Joey vows to see him again.  For Joey, this is merely the beginning of an adventure that will have him charging into battle for the British and pulling artillery for the Germans. 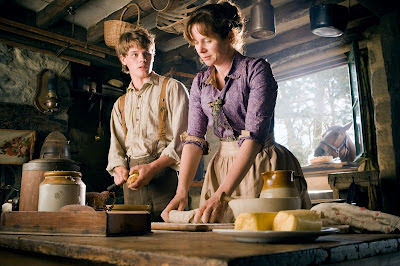 WAR HORSE director Steven Spielberg turns to the films of John Ford for inspiration in looking at war’s devastating and dehumanizing effects.  He adopts the swooningly earnest style in all of its broad emotional sweep, camera placement, and widescreen Technicolor cinematography.  While made with great technical proficiency, WAR HORSE is determinedly old-fashioned in how Spielberg tells the story, which is a fitting creative strategy considering that the film studies the convergence of the old and the modern.

The battle sequences are as thrillingly directed as the World War II fighting Spielberg thrust viewers into during SAVING PRIVATE RYAN and just as tragic in depicting the great loss of life.  A British charge on horseback into a German camp becomes a slaughter at the edge of the woods, where man and animal are no match for machines.  Spilling out of the trenches for combat in no man’s land is a near certain death sentence no matter which side one enters from.  The men’s lives may be more valued, but they’re protected with little more care than the horses that are literally worked to death.  None of this is as a graphic as in SAVING PRIVATE RYAN. Rather, it’s more in line with the standards in the 1940s and ‘50s, yet the impact in observing this wasteful sacrifice is no less powerful.

Charges of sentimentalism are lobbed freely at Spielberg.  There’s no question that the director works to yield big emotional payoffs, especially in this traditional melodramatic form.  Still, WAR HORSE’s ostensibly happy ending comes with the knowledge that the boy and the horse have witnessed many atrocities that may haunt them in the years to come just as Ted is stalked by his memories from military service.  The deep red sky hanging over the Narracott homestead and drenching everything under it in its color is a stark contrast to the blue heaven and green landscape they once knew.  Man and horse have been forced to act contrary to their nature.  Like the donkey in Robert Bresson’s AU HASARD BALTHAZAR, the beast suffers for humanity’s failings.  While Albert and Joey have survived, some stains, like the looming color above and around them, cannot be escaped.