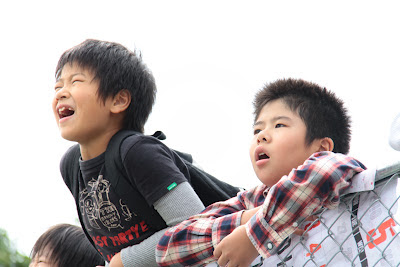 Like many kids whose parents have separated, brothers Koichi (Koki Maeda) and Ryunosuke (Ohshirô Maeda) would like to reunite their family.  Twelve-year-old Koichi, the older and more serious of the siblings, believes he’s found the solution in I WISH (KISEKI).  He overhears classmates saying that whoever sees two high-speed trains pass each other for the first time will get their wishes granted.  New bullet trains are scheduled to begin service across the island of Kyushu in two months, so the boys work on plans to meet halfway in Kumamoto prefecture to get their dreams fulfilled.

Koichi, who lives with their mother Nozomi (Nene Ohtsuka) and her parents in the island’s southern prefecture Kagoshima, is pushed into action by hearing his mom being encouraged to move on.  She’s already taken a job as a cashier at a grocery store.  A boyfriend could soon follow.  Knowing the importance of the mission, Koichi prepares with an explorer’s thoroughness.  He and his friends examine maps to determine where the trains are most likely to pass, calculate a budget for the trip, and scrape together the money by looking for spare coins and selling some toys.

Ryunosuke doesn’t seem to mind the new arrangement as much as Koichi.  Certainly he would like for everyone to be together again, but he doesn’t worry about whether or not their parents will reconcile.  Since choosing to stay with their musician father Kenji (Joe Odagiri) in the island’s northern prefecture Fukuoka, he’s taken to tending a garden and surrounded himself with many friends.  For Ryunosuke the trip seems more like a chance to see his brother for the first time in six months and a fun day away from home with his pals. 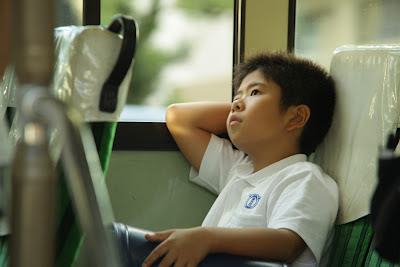 As noisy as two trains passing each other at 160 miles per hour is, the disruption to the surrounding environment is fleeting.  The same can’t be said for the effects on children of divorce or a parent’s gambling problem, but in I WISH such disturbances don’t necessarily need to be ruinous either.  Writer-director Hirokazu Kore-eda studies the resiliency of children in the face of life transformations large and small.  He tracks these adaptations with plenty of charm and wit, making this observational look at the kids closer to Francois Truffaut’s SMALL CHANGE than his own harrowing NOBODY KNOWS.

The great pleasure of I WISH is Kore-eda capturing kids being kids instead of the little adults many films mistake children for.  Sometimes they can be very funny, like when they talk about crushes on teachers and what they would wish for if they could be guaranteed to have one dream made real .  At other points watching them can be heartbreaking.  For instance, Koichi is more tuned into his mother’s fragile emotional state than anyone else realizes.  I WISH excels at evoking a child-like state of mind in all of its wonders and concerns because of Kore-eda’s astuteness in following how kids make sense of the world and change their perspectives.

I WISH retains Kore-eda’s gift for empathetic scrutiny of daily life and ordinary people while also delivering miracles of a kind.  Hurl prayers for momentous change if one will, but don’t forget that answers and greatest blessings can come in the form of chance encounters and common pleasures.  I WISH feels slighter than Kore-eda’s best work, such as AFTER LIFE and STILL WALKING, but it’s a warm effort that finds through the tough times the kids can be, and often are, all right.