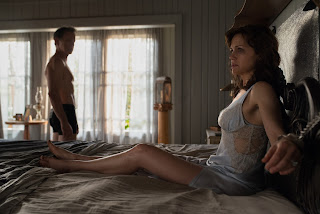 With declining intimacy in their marriage in GERALD’S GAME, Jessie (Carla Gugino) and Gerald (Bruce Greenwood) go to an isolated lake house to spice up their relationship. She agrees to entertain his sexual wishes and consents to being handcuffed to the bed, but Jessie draws the line when he wants to play out a rape fantasy. Whether brought on by anger or something else, Gerald has a heart attack, collapses, and falls onto the floor when Jessie pushes him off of her. While her husband’s lack of movement and blood pooling around him is highly worrying, Jessie has a more pressing concern. She is shackled to the bed, cannot get free, and has no one nearby to hear her cries for help.

This desperate situation becomes more fraught when a hungry stray dog wanders into the bedroom. Seeking an escape of any kind, Jessie flees into her mind where she strategizes with herself, is taunted by her husband, remembers a painful child incident with her father (Henry Thomas), and avoids looking in the corner where she saw the death-like Moonlight Man (Carel Struycken).

The filmography of GERALD’S GAME director and co-writer Mike Flanagan reveals an aptitude for spinning psychological horror out of action largely confined to a house. Whether focusing on the brother and sister trying to capture evidence of an evil mirror in OCULUS or a deaf writer in the woods attempting to fend off a masked killer outside her home in HUSH, Flanagan demonstrates a knack for using location limitations to wring out the tension. The houses in these films don’t need to be inherently scary if they harbor an unhappy family history, expose vulnerabilities, or isolate, as in GERALD’S GAME. Although a dog licking its chops and the embodiment of death appear, the mind’s assessment of danger, coupled with its difficulty to produce a solution, generate the terror.

GERALD’S GAME shows that as a mental protection strategy, compartmentalization can be useful. Jessie bottles up her anxiety as best she can because it will help her survive. She summons strength by breaking things down into manageable bits and blocking out the rest as much as possible. Gugino’s performance relies on conveying an active mind scanning Jessie’s options for a solution. The character is bound and vulnerable, but Gugino displays the toughness and ingenuity that identify how constraints don’t have to make one weak.

The primary horror in this Stephen King adaptation is psychological. Flanagan expertly sets up the situation with a highly tense sequence that draws immediate identification with Jessie. While GERALD’S GAME pokes at mental discomfort, the director allows for one excellent gross-out moment that ought to provoke plenty of seat-squirming even if this film is only available to see on the smaller screens at home. In the film’s end Flanagan unnecessarily literalizes points, yet it’s hard to be too critical for the nice notes he plays regarding overcoming trauma.