In IT'S COMPLICATED former husband and wife Jake and Jane (Alec Baldwin and Meryl Streep) find that there are still some sparks between them ten years after their divorce. Jane has been wrapped up in her career and kids since the marriage ended, but as she watches their youngest child leave her home, the lack of a personal life becomes more apparent. Meanwhile, Jake went on to marry the much younger woman who had been his mistress.

While in New York for their son's graduation, Jane and Jake share an impromptu dinner that leads to the hotel room and a mess of a morning after. Jane has now become the other woman yet entertains the idea of getting back together with Jake. She knows it's probably a terrible mistake but can't help but reveling in what it is like to feel desirable again. The problematic nature of Jane and Jake's arrangement gets compounded when her architect Adam (Steve Martin) begins competing for her affections as well.

IT'S COMPLICATED is a triumph of casting. Streep, Baldwin, and Martin are having so much fun in this romantic comedy-drama that it's impossible not to get swept up in the good time they're having as well. As a bakery owner, Jane makes and sells sweet indulgences but has denied herself the same relationship-wise. Streep cuts loose in the role, and it's a pleasure to watch her dithered and delighted as the character rediscovers her attractiveness and worth. 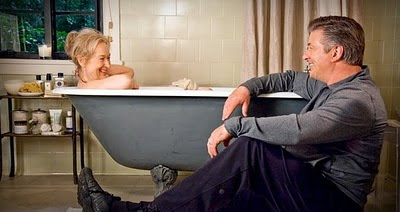 The rascally Baldwin stirs up laughs with the confident satisfaction he exudes in seducing his ex-wife and juvenile jealousy he exhibits when another man comes across Jane's radar. Martin shows fragility, comfortable resoluteness, and good humor in how his character deals with post-divorce life and the love triangle he's unwittingly wandered into.

Writer-director Nancy Meyers keeps the complications in IT'S COMPLICATED more in the scenarios than in the emotions, which holds back what is otherwise an often funny film. It's a pleasant surprise that Jake's second wife Agness (Lake Bell) isn't portrayed as a shrew, yet Meyers evades thorny questions of the primary ethical dilemma Jane faces if she is to continue seeing Jake on such enraptured terms.

The oh-so-French set-up is managed as consequence-free wish fulfillment rather than the existential examination a more serious-minded filmmaker might give it. Meyers also infantilizes Jane's adult children to a weird degree, but such shortcomings can't undermine a good film with three actors having a blast.