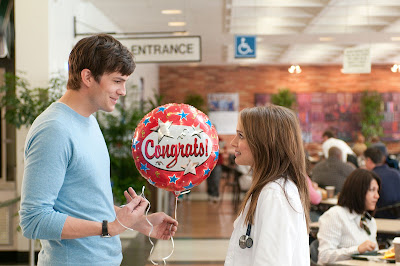 To Adam (Ashton Kutcher) the proposal sounds too good to be true. Longtime acquaintance Emma (Natalie Portman) suggests that they become, to use a euphemism, friends with benefits. As the film’s title explains, they’ll have sex with no strings attached. They won’t go on dates or take vital roles in one another’s lives. Developing feelings, like post-coital cuddling, isn’t just discouraged but is strictly forbidden. They’ll use each other for sex. That’s it.

The pact seems ideal for Adam, who receives this offer after coming off a bender inspired by learning that his ex-girlfriend Vanessa (Ophelia Lovibond) is now sleeping with his dad (Kevin Kline). After such an emotionally traumatic experience, he can limit his vulnerability if involved with Emma in a purely physical way. Plus, he’s been interested in her since they attended summer camp together as kids.

As with most deals that defy belief, being best sex friends is more complicated than Adam anticipated. He feels jealous of a co-worker who pays her attention and begins to crave something akin to a dating relationship. Emma rebuffs the idea and encourages him to sleep with another woman so they won’t become too dependent on each other. Inevitably, though, Emma regrets pushing him into someone else’s embrace while remaining uncertain of what she wants.

NO STRINGS ATTACHED entices with its libertine premise about the joys of relationship-free sex, but the come-on is really just a lusty tease for a standard romantic comedy. Aside from an early montage of Kutcher and Portman coupling in beds, showers, and storage closets, Elizabeth Meriwether’s screenplay ditches the central conceit to get down to the business of making the leads acknowledge their love for each other. 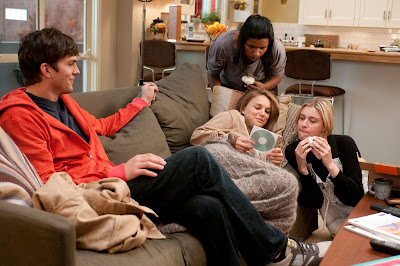 The problem isn’t that NO STRINGS ATTACHED resolves itself in traditional moral terms but that it lacks the conviction to explore the very basis of the plot. A better version of the film might still arrive at the same conclusion while also considering the dynamics of a sex-based relationship free of emotional ties. NO STRINGS ATTACHED doesn’t allow room for such reflection. Rather, it sees two attractive people and decrees that they should be together happily ever after. Leave it to Joe Swanberg or the French to examine hook-up culture.

Then again, maybe a more thoughtful approach wouldn’t have worked because Portman’s character verges on having a full-blown personality disorder. Her refusal to develop close connections to anyone indicates issues beyond a mere desire for casually indulging in pleasures of the flesh. Emma is written crueler than Portman seems capable of playing her, which makes for a lighter film and a fine bit of irony with NO STRINGS ATTACHED coming on the heels of BLACK SWAN. She and Kutcher make an appealing on-screen pair, although not one with much spark or color. They seem like nice but boring people.

The more interesting characters are hidden in the margins, and director Ivan Reitman gets his money’s worth when briefly giving them the spotlight. Stuck in the sidekick zone are Greta Gerwig, Mindy Kaling, and Guy Branum as Emma’s fellow doctors and roommates, Olivia Thirlby as her engaged sister, and Jake Johnson and Ludacris as Adam’s pals. NO STRINGS ATTACHED tends to perk up and be funnier when the extensive supporting cast chimes in with their opinions about the predicament Adam and Emma have boxed themselves in. It even produces a greater sense of romantic longing missing in the main couple when the attention shifts to the hesitant and flirtatious interactions between Adam and his infatuated co-worker Lucy (Lake Bell).

Reitman guides NO STRINGS ATTACHED with an old pro’s workmanlike abilities, but when it comes to love, sex, or just a couple hours at the movies, achieving efficient competence isn’t the most satisfactory outcome.