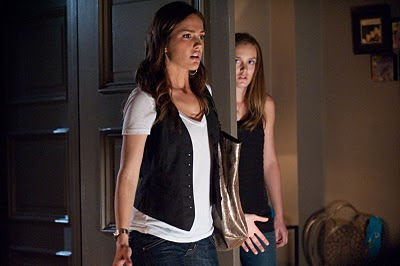 In THE ROOMMATE Iowa native Sara Matthews (Minka Kelly) arrives in Los Angeles ready to study fashion design and find a more exciting life than the one she left behind in Des Moines. Her first night on campus she makes some friends and meets Stephen (Cam Gigandet), a cute guy who plays in a band. Everything in her new surroundings is looking up, even when it comes to the uncertainty about who she’ll be sharing a dorm room with.

Her roommate Rebecca (Leighton Meester) seems nice enough, and the two of them cement their friendship through interests in clothes and art. Rebecca does tend to be clingy and overprotective of her new friend, but her heart seems to be in the right place. As time goes by, though, Rebecca’s attachment to Sara begins to look more sinister.

Most college students don’t know the people they are assigned to live with as freshmen, so the potential exists for being paired with someone who may be weird or unstable. THE ROOMMATE has the seed of a promising thriller in its premise yet never taps into the anxiety of discovering that the person designated to share your space makes you uncomfortable.

The film’s primary mistake is in giving Sara far too much freedom and alternative living arrangements if things sour between her and Rebecca. Rather than experiencing the culture clash of the heartland versus L.A. and not knowing anyone in her new home, Sara takes like a fish to water to the big city and can move in with a boyfriend or a fashion designer friend with an empty condo if the dormitory isn’t hospitable. 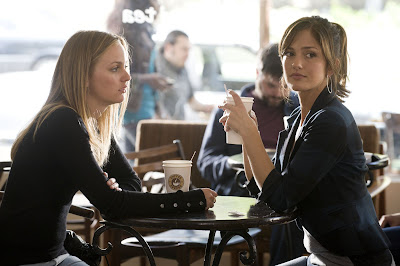 If THE ROOMMATE is to nurture any fear, it has to make Sara feel isolated and alone, not only so she turns to Rebecca for support but also so she feels like she lacks options when her roommate freaks her out. Clearly the outgoing and popular Sara never is aware of such loneliness or doubt, and her experiences never feel like those of a typical college freshman, even when accounting for the movie universe. She might have well met Rebecca via Craigslist.

THE ROOMMATE further cuts all tension with performances that are pretty terrible across the board. Both Kelly and Meester play their roles at surface level, resulting in the former coming off as exceptionally dumb and the latter as self-evidently out of her mind.

THE ROOMMATE is little more than SINGLE WHITE FEMALE: THE COLLEGE YEARS, so nuance isn’t exactly expected from this pulpy story. Still, even when aiming for trashy fun, the plot ought to be invested with some gravity and firmer commitment to the core idea of a disturbed young woman obsessed with her roommate. The film flits around its concept and doesn’t seem awfully interested in it. THE ROOMMATE is easy to watch garbage worth a few derisive laughs and little more.