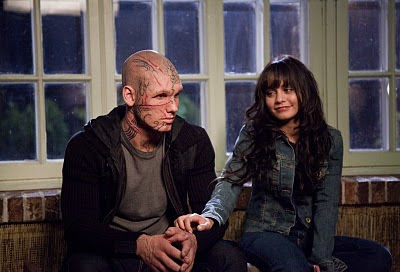 BEASTLY, the latest Classics for Tweens film adaptation, bedazzles the oft-told BEAUTY AND THE BEAST story with smart phones, social media, tattoos, and Jujubes, as though such contemporary things will keep the kids from noticing how super lamers it is.

Kyle (Alex Pettyfer) is king of the New York academy he attends and doesn’t bother hiding his disgust for anyone who isn’t beautiful and wealthy. His profile at a generic social media site lists likes as those who are “bangable” and dislikes as “fattycakes”. Yes, he’s a real charmer.
In his speech before an adoring prep school crowd, Alex extols the virtues of the genetically and financially blessed and tells his classmates that he wants to win the election for Green Committee president because it will look good on his resumé, not because he cares about the environment. Apparently Green Committee is the new student council as go-to cinematic signifier of prestige and popularity.

After taunting the school’s rumored witch Kendra (a gothed-up Mary-Kate Olsen) one time too many, Kyle is punished for his cocksure and cruel ways. Kendra casts a spell on Kyle that brings his ugliness to the surface, although really she makes him look like Darth Maul with some nasty facial scars and metallic silver Sharpie scribblings on his forehead and bridge of his nose. He will have one year to find someone to proclaim love for him or else the disfigurements will remain permanent.

When it becomes clear that the magic can’t be reversed, his image-conscious news anchor dad (Peter Krause) hides Kyle away with their Jamaican maid Zola (Lisa Gay Hamilton) and blind tutor Will (Neil Patrick Harris). Kyle stews in luxurious isolation for nearly half of the deadline before venturing into New York City in search of a girl who might break the curse. 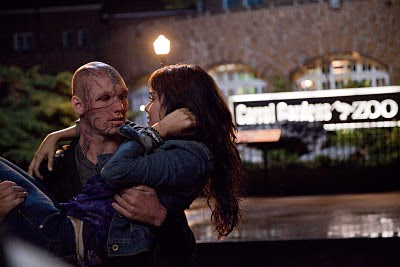 He has his eye on Lindy (Vanessa Hudgens), a pretty classmate harboring an independent spirit and a crush on him when he was a handsome brute. One night Kyle saves Lindy from the dealers hassling her and her widowed, drug addicted dad. (Strangely, she doesn’t seem to notice who intervenes.) Kyle uses the situation to blackmail her father into sending Lindy to live with him so that she will be safe.

Once she moves into his penthouse, Kyle begins wooing her with Bulgari jewelry and other expensive gifts while hiding underneath a hoodie and lingering behind corners. Lindy doesn’t want such fancy things. After he considers her interests, shows his face, and begins to open up, she warms to him, but time’s a-wasting according to the tattoo that covers his forearm.

Credit BEASTLY with this: it contains as little flab found on Pettyfer’s carved abs. Unlike the bloated TWILIGHT films, the success of which BEASTLY is clearly trying to capitalize on, it’s edited as though there’s a race to burn through the plot points. It’s about as romantic as a stock swap, but at least it cuts to the chase. 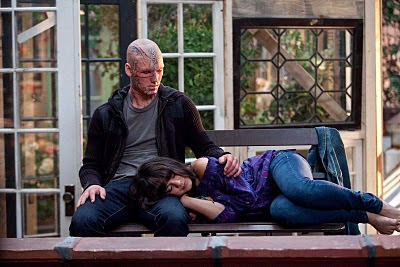 Whether it’s remnants from the source material or the film’s weird way of establishing characters, BEASTLY plays as an apologia for bad boys and the saintly girls who find them irresistible. Kyle’s father ignores him and has raised him with poor values. The pompous teen’s edges are supposed to be softened because the hired help wish only the best for him despite his abominable treatment of them, especially Zola. The immigrant servant’s unconditional care and concern for him borders on offensiveness and would surely be viewed that way with the modern perspective on an older film expressing a similar sentiment. Kyle’s actions are rarely unselfish. He’s just desperate to regain his looks. He becomes more sympathetic to those less fortunate in their physical features and bank accounts, but it stands to reason that he might need a reminder of this lesson in a few years.

Lindy’s portraiture is more problematic. She already likes him when he’s in raging jerk mode and excuses his hideous arrogance as unvarnished honesty. She continues to pine for him while everyone believes Kyle is away spending months in rehab. Lindy is merely another in the long line of funky gals with x-ray specs for the souls of egotistical but misunderstood clods. BEASTLY doesn’t have the decency to grant Lindy any assertiveness in this tale. She’s there for Kyle’s needs and nothing else. For all of the film’s nods to today’s society, in this department it remains determinedly archaic.

BEASTLY is teeming with dialogue clunkers that only Harris makes intentionally funny, although his line readings come off as though he’s skipped forward to starring in the inevitable parody sketch. It’s a bad CW drama writ as a feature film, and one undisguised as a Hollywood executive’s wish to horn in on that jackpot of sweet, sweet teen supernatural romance cash at that.