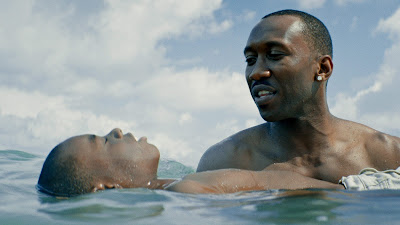 MOONLIGHT tells the story of Chiron through three stages of his life, each distinguished by the name he goes by. It begins with him in grade school referred to as Little (Alex Hibbert), a name thrust upon him by the other kids because of his small stature. Little tends to get picked on and not fight back. As the film begins, he outruns the other boys to hide in a boarded up apartment often used by drug users in the Miami neighborhood. Cuban drug dealer Juan (Mahershala Ali) finds Little and decides to look out for him until the tight-lipped boy tells him where he lives so he can take him home. Little lives with his drug-addicted mother Paula (Naomie Harris), but Juan and his wife Teresa (Janelle Monáe) take an interest in the boy and become like secondary parents.

Little grows into the gawky Chiron (Ashton Sanders), a quiet teenager who still draws his share of abuse from classmates. It has long been apparent to others, especially his mother, that he is gay, even if Chiron is just gradually discovering his sexuality. Longtime friend Kevin (Jharrel Jerome) is more assured in who he is and sees someone similar, if less confident, in Chiron, but the high school environment obstructs them being together in a way they both need.

Chiron develops into the bulked up Black (Trevante Rhodes), who looks the part of the drug dealer in Atlanta that he has become but remains the sensitive soul he’s always been. Out of the blue Black gets a call from Kevin (André Holland), who is working at a diner back home. Feeling the pull to see him again, Black drives back to Miami to reconnect.

The main character in MOONLIGHT is asked who he is, and that search for identity connects the three parts. Chiron first goes by that belittling nickname and then the birth name given by his often cruel mother. He adopts the name Black as an adult, but he doesn’t really have ownership of that tag as it was what Kevin started calling him when they were nine. At each stage he is known according to how others see him. He hasn’t really had a chance to assert his true nature, so the inner Chiron gets suppressed to conform to expectations or avoid drawing attention. Juan tells Little about a neighborhood woman who said that black boys look blue in the moonlight. The blueness extends to Chiron’s emotional composition.

Writer-director Barry Jenkins infuses MOONLIGHT with a sense of longing that gives Chiron’s maturation a tragic arc while it dangles the possibility of happiness. Juan, Teresa, Kevin, and, eventually, even Paula possess the potential for helping Chiron become actualized in a way that he’s not been able to do on his own, yet fear and passivity hold him back. The film’s superior final third swells with the nostalgia and restrained passion of Wong Kar-wai’s IN THE MOOD FOR LOVE. Black’s reunion with Kevin could break him free of the loneliness and uncertainty that has defined him. The question remains if he can finally submit to showing his genuine self and living like that.

MOONLIGHT boasts an outstanding ensemble. Jenkins elicits consistent performances across the three actors playing the central character so nine-year-old Little is visible through teenage Chiron and twentysomething Black. Ali humanizes what could have been a clichéd character into a complex individual who can see the damage his livelihood causes. He atones for it as he can by demonstrating love for Little. Jenkins makes smart choices in showing Juan living what passes for an ordinary life rather than the extravagant lifestyle that might be associated with a Miami drug dealer. In her brief time on screen Monáe makes an impact as the soft but firm mother figure Chiron needs while Harris uncovers the ugly and pitiable nature of a mother racked with too many of her own issues to support her son properly. Holland’s relaxed essence makes a lovely contrast with Rhodes’ tentativeness as they size up who the characters have grown into being. With MOONLIGHT Jenkins finds majesty in the search for self.