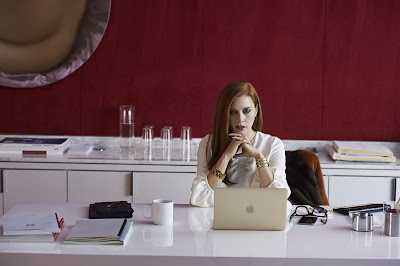 Art gallery owner Susan Morrow (Amy Adams) and novelist Edward Sheffield (Jake Gyllenhaal) were married while graduate students in New York City, but since things ended badly nearly twenty years ago, they have not been in touch. The intervening time has apparently provided Susan much of what she believed Edward could not give her, although in NOCTURNAL ANIMALS she shows no indications of living a more satisfying life. Susan enjoys professional success but appears to draw no fulfillment from it. Her marriage to Hutton (Armie Hammer) is chilled. While they keep up appearances, they are also in financial distress.

Susan has long had a problem with insomnia, a condition which becomes more pronounced as she reads the manuscript Edward sends to her out of the blue. In his violent novel she envisions her ex as the protagonist, Tony, a sensitive husband and father who becomes obsessed with revenge after three scuzzy men abduct, rape, and kill his wife and daughter. In the story within the film, Tony gets assistance from Bobby Andes (Michael Shannon), a police detective who wants to see justice done whether it’s achieved within the law or not.

With the structure of NOCTURNAL ANIMALS writer-director Tom Ford intends for Susan to experience the lingering anger Edward has felt since the dissolution of their relationship. Art is one way to feel empathy for others, and the novel functions as Edward’s passive-aggressive vehicle for breaking through the hard exterior Susan has accreted. Susan slices her finger opening the package before even reading a page, metaphorically foreshadowing the sharp-edged nature of the novel therein. From the story within the film to the framing device and flashbacks Ford uses match cuts and others edits to connect Susan to the fictionalized and past versions of a man intent on making her understand the rage she stirred within him.

In Edward’s book, also called NOCTURNAL ANIMALS, the inciting event results from his desire to defuse a situation in which he is essentially helpless. The men who drive Tony off the road and harass his family are not bound by the rules of civility. Knowing full well they intend to cross over and cause harm, the aggressors taunt him like playground bullies holding their fingers half an inch from their victims and feigning innocence by saying that they’re not touching them. In an extended and incredibly tense sequence the leader, Ray (Aaron Taylor-Johnson), and his cohorts menace Tony, his wife, and daughter by sinisterly going through the motions of politeness before advancing to more hands-on terrorizing. Through his character Edward lays bare the vulnerability and lack of a choice he suffered from at Susan’s hands.

Shannon adds hard-bitten humor as Edward’s opposite, the manifestation of the kind of tough, practical man who can facilitate revenge without damaging his conscience. Abel Korzeniowski’s darkly romantic score steeps NOCTURNAL ANIMALS in film noir. While Susan didn’t set out to make Edward her sap, she ultimately treated him like a sensitive fool. His long postponed response produces an indirect confrontation that is no less emotionally savage for his means of delivering it. Ford executes quite the trick in having this overdue and brutal conversation take place like a thriller in which the principals share only a mental space.