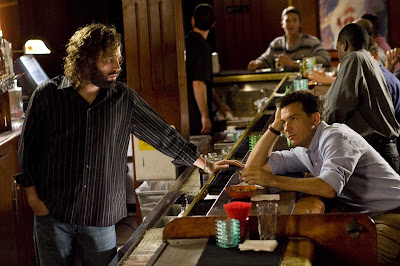 EXTRACT (Mike Judge, 2009)
In the comedy EXTRACT Joel (Jason Bateman) might appear to have everything he could want, but he's struggling to keep it together. He's founder and owner of Reynold's Extract, which is doing good business and has a large corporation inquiring about a buyout. Joel is also married to a woman he loves and has a nice home and car.
Unfortunately for Joel an employee injury on the factory floor could be financially devastating to the company and jeopardize the potential sale. Factor in Joel's nonexistent sex life and temptation in the form of Mila Kunis' flirtatious temporary worker Cindy, and it's a recipe for constant aggravation.
EXTRACT writer-director Mike Judge, whose credits include OFFICE SPACE and the animated series KING OF THE HILL, may be the filmmaker who best understands today's working middle class. Although EXTRACT is far from his greatest accomplishment, primarily due to the film's underwritten feel, he remains a sharp and humorous observer of the small, common nuisances that slowly and quietly crush spirits. 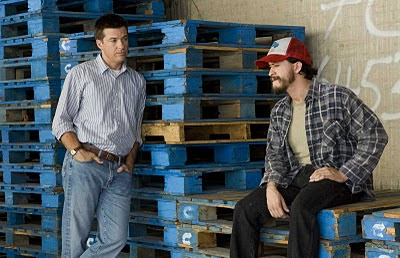 With EXTRACT Judge collects and loosely connects amusing vignettes from middle class life, be it the overly friendly neighbor whose nose is always in one's business or the pettiness of one's employees when they detect the slightest hint of favoritism. The plot is pretty much a mess, but Judge strings together plenty of minor laughs to disregard the film's structural chaos.
Bateman is a dependable lead in a role not far removed from ARRESTED DEVELOPMENT'S put-upon Michael Bluth, and he has good chemistry with a badly bearded Ben Affleck as Joel's bartending best friend Dean.
The film gets stolen, though, by Dustin Milligan as a dim-witted gigolo that Dean convinces Joel to hire to test his wife's fidelity and possibly give him an out for hooking up with the foxy temp. Milligan plays stupid convincingly, but he doesn't overdo it. You can practically see and hear the gears working in his head as he tries to process the instructions he'll inevitably fail to follow properly.
EXTRACT works better as a bunch of miniature observations than as a singular piece, but viewed within the context of Judge's body of work, it's a funny and worthy addition to his suburban comedies.
Grade: B-
Posted by Mark Pfeiffer at 9/04/2009 09:08:00 PM