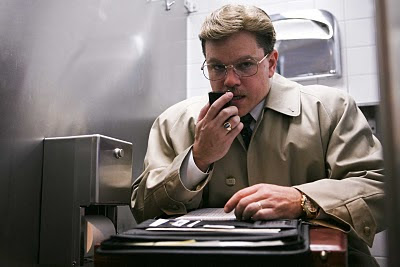 THE INFORMANT! (Steven Soderbergh, 2009)
In the fact-based comedy THE INFORMANT! Matt Damon stars as a corporate executive turned whistleblower in a major multi-national price-fixing case in the early 1990s. Damon is Mark Whitacre, an up-and-coming divisional president at agri-business giant Archer Daniels Midland.
Mark's first contact with the FBI comes when he tips off his superiors that a Japanese competitor claims to know of a mole at ADM and wants ten million dollars to reveal who it is. He worries that the bureau's tapping of his business phone line at home will reveal what else he's involved in, so Mark confesses that his employer has him conspiring with other corporations to set the global market on lysine.
Mark agrees to cooperate with the FBI and make tapes documenting the illegal business practices, but for all of his help, the confident and bumbling informant complicates the case far beyond anyone's expectations. 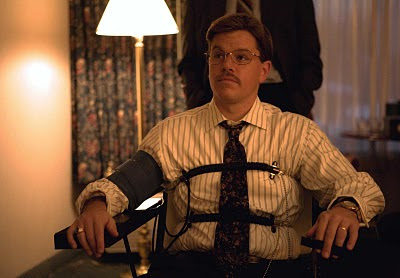 Director Steven Soderbergh and screenwriter Scott Z. Burns could have adapted Kurt Eichenwald's book as a thriller. Instead THE INFORMANT! treats the true story as a comedy set to a jaunty Marvin Hamlisch score. The music and light tone serve as counterpoint to the serious business of corporate criminality and the drudgery of collecting and understanding the complex evidence needed for prosecution.
Soderbergh and Burns deftly present the puzzling information in a clear and highly entertaining manner, but for all of their hard, workmanlike efforts, the film is Damon's through and through. At first Damon's hilarious performance appears to be little more than playing the clueless schlub who narrates his exploits with an internal, analytical yammering, which is funny enough in its own right. Damon's layered work gradually transforms this unlikely hero into the type of person Whitacre's FBI handlers couldn't have anticipated encountering.
Whitacre was the highest ranking executive informant who ever cooperated with the bureau. The story about why he chose to help is fascinating, perplexing, and, in a certain light, outrageously funny.
Grade: A-
(Photos courtesy of Warner Bros. Pictures)
Posted by Mark Pfeiffer at 9/18/2009 11:51:00 PM