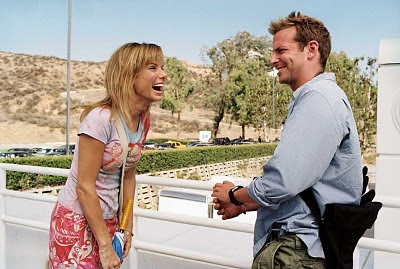 ALL ABOUT STEVE (Phil Traill, 2009)
In ALL ABOUT STEVE crossword puzzle creator Mary Horowitz (Sandra Bullock) grudgingly accepts a parentally-arranged blind date with cable news videographer Steve (Bradley Cooper). Upon seeing her handsome date Mary becomes hot to trot, but her intensity and incessant chatter lead Steve to cut short their time together. His job provides the convenient excuse of a breaking news assignment out of town. Steve politely but insincerely says that he wishes Mary could accompany him.
Instantly obsessed with Steve, Mary misreads the situation and decides that fate is telling her to follow him around the country. The situation worsens when Steve's co-worker, pompous news reporter Hartman Hughes (Thomas Haden Church), encourages Mary's seemingly delusional actions.
ALL ABOUT STEVE is constructed as a romantic comedy, but Mary's tireless, stalker-like behavior suggests that this ought to be a horror film. There's that and the matter of ALL ABOUT STEVE being dreadfully unfunny. Hartman feeds her delusions, but Mary's inability to decode social cues and her ceaseless cheer are intended as cute quirks, as though she's an innocent venturing into the world for the first time. 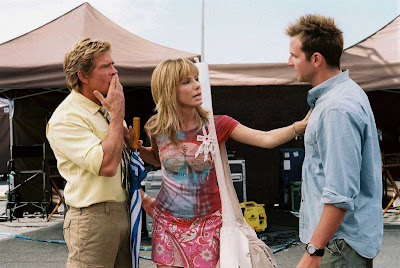 Bullock plays Mary as a sweet savant with no concept of how demented she is. Twinkly tics and all, Bullock's performance is an irritating one, to say the least. It's as if Poppy, the positive thinking main character of HAPPY-GO-LUCKY, wandered into this movie and lost all self-awareness.
Propagating ALL ABOUT STEVE'S spectacular misconception is its drumbeat of up with the unusual, down with the press. There's a touch of Billy Wilder's ACE IN THE HOLE to ALL ABOUT STEVE'S media criticism, although if that parallel was intended, director Phil Traill and screenwriter Kim Barker missed that the gathering gawkers and carnival building up around a rescue site were not positive developments.
ALL ABOUT STEVE is an atypical romantic comedy, but different for different's sake doesn't automatically equate to good.
Grade: D
Posted by Mark Pfeiffer at 9/06/2009 08:54:00 PM