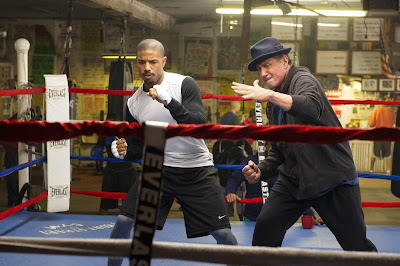 CREED’s Adonis Johnson (Michael B. Jordan) is the product of an affair and never knew his father, so he has plenty of conflicted feelings about the man the world knew and loved as heavyweight champion boxer Apollo Creed. Rather than going by his mythological name, he prefers to be called Donnie and doesn’t trumpet his heritage. He inherited physical gifts from his father, though, although he exhibits them on the sly by fighting on the weekend in Mexico than in a recognized organization.

Donnie decides that he must follow his heart to be a boxer, so he moves from Los Angeles to Philadelphia and tracks down Apollo’s old rival and friend Rocky Balboa (Sylvester Stallone) in the hope that this other boxing legend will train him.

As the seventh film in the ROCKY series, it would stand to reason that CREED might play like a retread. Instead co-writer and director Ryan Coogler delivers a familiar but dynamic offshoot. CREED takes a comfortable position in the tradition of these underdog sports movies and builds upon it. The story beats are similar, yet as a character study of a different up-and-comer and an icon who moves from inside ring to the corner, it is surprisingly affecting. Stallone, who did not have a hand in writing a ROCKY-related film for the first time, is critical to the film’s emotional tug. Rocky isn’t the last of his kind but is the last from his circle, and in part CREED is about coming to grips with that. Stallone plays Rocky with a sadness about him. He isn’t looking to regain past glories. He misses the people who used to be around him, not the titles. Stallone wears the heartache well, revealing the soft spots inside the warrior’s body he still possesses. Coogler conveys Rocky’s melancholy with subtle touches. Paulie’s old room in Rocky’s house remains the way it was when he died. Rocky keeps a folding chair in a tree at the cemetery, a sign that he’s a regular visitor at his trainer and wife’s graves.

Although it’s inevitable that CREED will build up to a big fight, Coogler is more interesting in Donnie’s internal struggle to reconcile where he comes from and who he is. The fight is with himself, which Rocky wisely points out in a training exercise in front of a mirror. Jordan plays Donnie as someone at once confident in himself and insecure about a background over which he had no control.

The emotional beats achieve the strongest reactions, whether between fighter and trainer or Donnie and Tessa Thompson’s Bianca, a singer that he falls for. Still, the boxing scenes pack their share of thrills, especially Donnie’s first billed fight that Coogler stages in a single unbroken shot. The technique dazzles while serving a dramatic purpose of understanding what it feels like to step into the ring for a first professional fight.