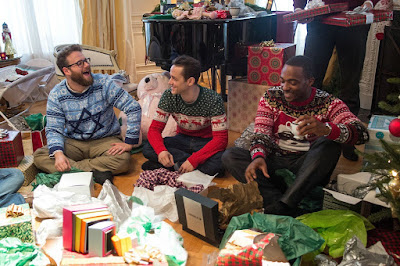 THE NIGHT BEFORE (Jonathan Levine, 2015)

Fourteen years ago Isaac (Seth Rogen) and Chris (Anthony Mackie) took out their grieving friend Ethan (Joseph Gordon-Levitt) on Christmas Eve for a night of chemically-enhanced celebration in New York City. Ethan’s parents had died recently, and he needed a boost to his spirits. In THE NIGHT BEFORE the three made this raucous time an annual tradition, but it’s agreed that this year’s holiday revelry will be the last. The guys are in their mid-thirties, and two now have other obligations upon them. Isaac will soon become a father. Chris is enjoying the benefits of fame from a breakthrough late in his professional football career.

Ethan, on the other hand, remains adrift in menial jobs and is moody about his break-up with Diana (Lizzy Caplan). He seems reluctant to let go of the Christmas Eve debauchery, but if this will be the final year of it, he’s prepared to do it up big. Employing sticky fingers as he works in a coat check, Ethan procures passes to the Nutcracka Ball, the city’s preeminent party at a secret location. Although the friends are looking forward to an evening of mindless fun, circumstances cause them to confront their greatest fears about the future.

Although Rogen doesn’t have a screenplay credit, THE NIGHT BEFORE touches upon a theme that pops up in several of the comedies he’s starred in, NEIGHBORS in particular. Rogen and his on-screen buddies wrestle with being responsible grown-ups while wanting to hang onto the freedom and recklessness that marked their young adulthood. Rogen’s Isaac has been taking impending fatherhood seriously, so his wife Betsy (Jillian Bell) grants him a free pass--and gives him a box of random drugs--for the good and supportive behavior he’s demonstrated through her pregnancy. Rather than letting Isaac cut loose, the permission to be irresponsible makes him face up to his anxieties about the major life changes that await and for which he feels ill-prepared. Filled with existential panic while in an altered state, Rogen is funny as he tries to keep his composure while high as a kite at Midnight Mass and in front of a friend’s mother.

As the guys’ pot supplier Mr. Green, Michael Shannon counters Rogen’s hysterical energy with a dry wit filtered through a typically intense performance. Mr. Green and his product serve a purpose akin to the ghosts in A CHRISTMAS CAROL, making Shannon ideal as someone whose presence indicates menace streaked with ribbons of humor to help his clients’ get through their cloudy mental states.

While THE NIGHT BEFORE produces a decent share of funny moments, it runs into a fair number of bumps in the road. Director Jonathan Levine and his co-writers can’t quite find the right mix of outrageous humor and dramatic material. Ethan is kind of a downer as the adventure goes deep into the night. The film’s hedonistic attitude gets tempered as THE NIGHT BEFORE advances toward a sentimental conclusion. That’s par for the course for films like this one, but it makes for a weird fit alongside Chris’s subplot regarding his steroid use to become a star toward the end of his football career. Like a sampler box of chocolates, some of it is good, and some is better left untouched.