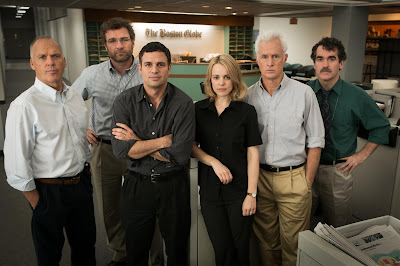 At the urging of new editor Marty Baron (Liev Schreiber) in SPOTLIGHT the Boston Globe’s four-person investigative reporting unit directs its attention to the story of an area priest who molested children. The team, known as Spotlight, consists of Mike Rezendes (Mark Ruffalo), Walter “Robby” Robinson (Michael Keaton), Sacha Pfeiffer (Rachel McAdams), and Matt Carroll (Brian d’Arcy James) begins work on the story in 2001 and soon learns that the abuse isn’t limited to one bad man in the Catholic Archdiocese. Rather, they uncover a pattern of institutional cover-up in which the problematic priests are moved among parishes.

SPOTLIGHT presents a thrilling examination of how journalists research and report a story. Although the film contains mystery elements, its attention is focused on the method and dogged determination to reveal the horrible truth that, in this instance, seems to have been an open secret among certain people in power. Writer-director Tom McCarthy and his co-writer Josh Singer excel at retracing the Globe reporters’ steps to connect information hiding in plain sight and gain access to documents that have been buried or removed. This may be the first and last time creating spreadsheets from rooting through old church directories can be described as compelling viewing.

Clearly the abusive priests serve as villains in SPOTLIGHT, but none of them are the ultimate targets of the reporting. To borrow video game terminology, the big boss awaiting the print heroes is the Catholic Church itself. The Spotlight team is squaring off against an antagonist without a face, yet McCarthy finds subtle ways to remind of the size and prevalence of their opponent. Cathedrals and their spires are often seen in the rear of shots as if ominously looming over the city and across the street from the publication. Church bells are heard in the background, one more indication of how it permeates the community.

The members of the investigative unit identify as Catholic, even if they may not be practicing. The majority of their newspaper’s readership is Catholic too. McCarthy and Singer do well at using the coded language groups employ to stress and enforce rightly held attitudes among those within a circle. The screenplay and the actors are also on point in demonstrating how reporters have to talk, almost as confessors, to their interviewees so they can extract key information. As a process film, SPOTLIGHT is exemplary.