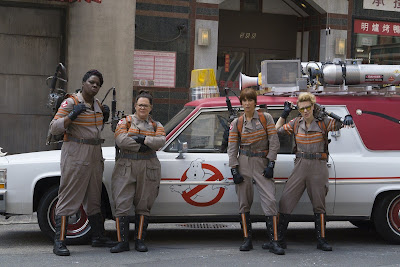 There’s something strange in the neighborhood, namely the matter of the GHOSTBUSTERS remake (or reboot or however this film is positioned as brand extension) becoming a cultural flashpoint, at least in the online realm where all sorts of unpleasant things become manifest. Apparently for some the 1984 Ivan Reitman film has taken on the status of sacred writ such that making a version with women in the main roles is likened to heresy. Maybe demons are real if a special effects comedy bolstered by a flippant Bill Murray represents the last line of defense, a cinematic Alamo to rally around. The original GHOSTBUSTERS is funny but hardly the pinnacle of film as an art. Reworking it with a women as the heroes is surely not a bellwether of men or male-driven entertainment becoming maligned in Hollywood.

The 2016 iteration of GHOSTBUSTERS written by Katie Dippold and director Paul Feig unfolds roughly in the same way as its source but with a few variations. Physicist Erin Gilbert (Kristen Wiig) has buried her past in paranormal research as she seeks tenure at Columbia University. The ill-timed online availability of the book she wrote about ghosts and the like with Abby Yates (Melissa McCarthy) prompts her to visit her formerly close friend with the hope of getting it pulled to preserve her reputation. In the intervening years Abby has continued to investigate the supernatural with engineer Jillian Holtzmann (Kate McKinnon). Abby agrees to take the book out of circulation if Erin will tag along to check out a nearby historical site reporting some ghostly activity.

The field work reawakens Erin’s once deeply-held beliefs in the metaphysical, but online video of the trio’s celebration after spotting an evil spirit leads to their professional ruination. They decide to use their unemployment as an opportunity to expand upon their research and go into business. They hire Kevin (Chris Hemsworth), a handsome but exceedingly dumb receptionist, and take on another partner in Patty Tolan (Leslie Jones), a Metro Transit Authority worker who has seen other ghosts in the subway system and can provide a car for hauling their bulky equipment. Even when they obtain seemingly incontrovertible proof of paranormal activity, skeptics continue to doubt them.

Having rewatched the original GHOSTBUSTERS within the last two years, it’s abundantly clear that Murray runs away with that film and doesn’t leave much for his other proton pack-carrying pals to do. This new GHOSTBUSTERS has standout performances, but overall there is more balance among the members of the team. Wiig doubles down on Erin’s awkward and relatively unassuming nature to get laughs. McCarthy brings child-like enthusiasm as a scientist who is thrilled at how cool it is to have her theories validated and test new, amazing technology. Jones adds the common perspective as she funnily and sensibly reacts to the unbelievable things she encounters. These Ghostbusters aren’t just Murray and a bunch of hangers-on.

Nevertheless, McKinnon and Hemsworth are implicated in stealing scenes in GHOSTBUSTERS. McKinnon’s dry performance suggests that Holtzmann may have spent too much time working in isolation and exposed to radiation. She is the embodiment of the weird last sketch on SATURDAY NIGHT LIVE, like a singer trying to perform a piece in a key or that exists only in her head. Hemsworth builds up the hilarity of Kevin’s blithe idiocy by playing it straight and with unwavering directness. Like McKinnon’s Holtzmann, his character seems to mentally occupy another plane of existence.

GHOSTBUSTERS gets bound up too much in plot development and drags when all hell literally breaks loose in Manhattan. The big special effects moments really are secondary to letting the funny women run with the material. It’s a solid, amiable mainstream comedy, which, in the end, is all that its inspiration was too.