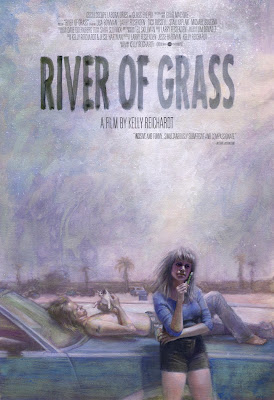 In depicting the Everglades as populated by dumb criminals and cloddish cops, writer-director Kelly Reichardt’s first feature, RIVER OF GRASS, resembles an arty, low budget Elmore Leonard adaptation. The deadpan comedy flows from the stark difference between the reality of the situation and the bumbling duo self-misperception that they are menaces to society with the fuzz hot on their trail of lawless behavior. They envision themselves as dangerous outlaws akin to Bonnie and Clyde when they’re really more like latch-key kids who freak out believing they broke mom’s favorite vase and decide the best course of action is to run away by going to the neighborhood park before anyone gets home. They don’t have a well-reasoned plan and don’t have the means to venture far from where they started.

If her policeman father Jimmy (Dick Russell) hadn’t lost his gun, Cozy (Lisa Bowman) would likely never meet the man who changes her life. Having misplaced his weapon, Jimmy is unable to detain Lee Ray Harold (Larry Fessenden), a petty thief with the Aristotelian ideal of a southern man’s name. Cozy is a bored housewife seeking relief from the mundane grind of raising three kids and maintaining her Broward County home. From the minimal effort she puts into her domestic duties, Cozy’s restlessness doesn’t appear to be rooted in being overwhelmed so much as being disinterested in what’s expected of her as a mother and spouse.

Lee, who is pushing thirty and has been booted out of his grandmother’s house one county over in Dade, isn’t exactly a model of ambition or success either. Still, when he meets Cozy at a bar and persuades her to sneak into someone’s backyard pool, he provides more excitement than she would get otherwise on a Friday night. Lee is carrying a gun a friend of his found--ironically, it’s her father’s missing piece--and hands it to Cozy shortly before they are interrupted by the homeowner whose property they’re trespassing on. She panics and accidentally pulls the trigger. Believing they are complicit in a crime, they go on the run and plan to flee the state.

Reichardt’s style in RIVER OF GRASS favors little camera movement and functional close-ups and medium shots. The boxy frame conveys a sense of being confined or stuck, that the marshy regional landscape doesn’t give sufficient footing to allow forward movement. Thematically, the film reinforces the frustration of not being able to progress. Whether trying to sell Lee’s grandmother’s record collection or exploring payphones’ coin returns, Cozy and Lee can’t scrounge up the money to keep the tank full to wherever they might want to go or even get on the toll road. The gleaming highway ramps stretching into the sky are so close yet inaccessible. Cozy’s newfound freedom on the lam keeps her hiding in a motel room or waiting in the car while Lee attends to matters. Her embrace of being a fugitive still comes with restricted motion.

The feeling of being trapped north of Miami allows RIVER OF GRASS to capture another side of Florida than what gets splashed across tourist brochures and billboards. The palm trees and blue sky are still there but stand in contrast to the seediness.  Reichardt establishes a firm sense of place, the one where people grind out their days than visit for a dose of sun.