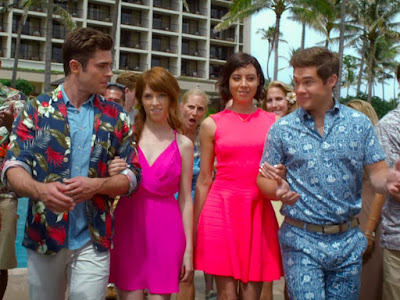 The Stangle brothers know how to have a good time at family gatherings, which is exactly why the rest of their family insists they bring stabilizing guests with them to their sister’s impending nuptials in MIKE AND DAVE NEED WEDDING DATES. Mike (Adam Devine) and Dave (Zac Efron) tend to wind one another up and indiscriminately hit on women at family functions, so the hope is that requiring them to bring dates when Jeanie (Sugar Lyn Beard) marries Eric (Sam Richardson) will keep them from ruining the big day.

Mike and Dave love their sister and want to do right by her. They place an ad on Craigslist that goes viral and appear on a television talk show with the aim of finding the perfect women to accompany them to the destination wedding. A free trip to Hawaii attracts all sorts of eager applicants, although the brothers manage to have the good sense to realize that these particular women are probably bad choices. Tatiana (Aubrey Plaza) and Alice (Anna Kendrick) are wild partiers looking for an adventure and thus not the nice, steady types who are supposed to be picked. Nevertheless, they get selected after conspiring to bump into Mike and Dave under the pretense of being sweet, responsible professionals who are unaware of the island vacation that awaits those who make the best impression on the brothers.

The tables are turned on the Stangle boys, as they gradually become aware that they have brought the female versions of themselves to the wedding. While some humor is found in observing the wreckage Tatiana and Alice create in MIKE AND DAVE NEED WEDDING DATES, this comedy tends to equate funniness with the volume at which people are speaking. The operating principle seems to be that nearly everything is more amusing if it is being yelled. (For the record, it isn’t.)

MIKE AND DAVE NEED WEDDING DATES tries mightily to trade on the energy and appeal of its cast. Despite their willingness to go for broke, the film has little to offer beyond a lot of overly familiar or borrowed gags, one of which is essentially copped to on screen as being lifted from WEDDING CRASHERS. I don’t know how much was scripted and how much was improvised on set, but the recurring use of montages hint at an effort to patch together something from ad libs. MIKE AND DAVE NEED WEDDING DATES consists mostly of concept. The rest is dog-paddling to last long enough to capture sufficient footage to assemble.

The general laziness aside, the lack of definition to the core characters stands out as a clear weakness. The performances by the main four show the strain of trying to compensate for little to work with. Plaza emerges most unscathed, perhaps because her apathetic screen persona comes across almost like a knowing dismissal of the film from within. Kendrick is woefully underserved, in part because the film doesn’t really know who her altar-jilted party girl is. The flimsily-conceived Mike and Dave leave Devine trying to fill the void by sheer force of will while Efron gets the thankless task of playing the one learning life lessons. MIKE AND DAVE NEED WEDDING DATES coasts on fleet pacing and residual appreciation for the primary cast, which is another way of saying it’s running on fumes.