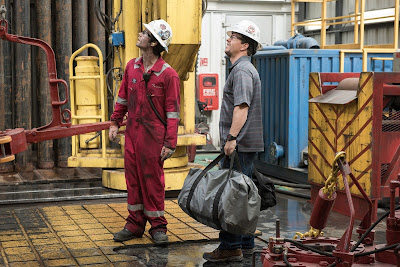 The somber drama and action in DEEPWATER HORIZON recreate the events surrounding the worst oil spill in United States history, but despite the good intentions of honoring those who were endangered, injured, and killed, it’s kind of the cinematic equivalent of a commemorative plate. The imagery calls for hushed voices and bowed heads in solemn remembrance while also stoking righteous anger about why the accident occurred. The action impresses as a technical exercise, yet being thrust into the catastrophe with the men and women aboard the doomed rig remains a curiously distant viewing experience.

Deepwater Horizon sat about forty miles off the coast of Louisiana in the Gulf of Mexico with the task of preparing wells for others to come in and extract the oil. The crew is already more than a month behind schedule in April 2010 when the crew chief Jimmy Harrell (Kurt Russell) and chief electronics technician Mike Williams (Mark Wahlberg) return. BP employees are pushing to speed up the process, even if it involves cutting some corners on safety. After a test result that raises some questions as to what it means, oil company man Vidrine (John Malkovich) insists that work proceed as though everything is shipshape.

Problems aren’t manifested immediately, but when they arrive, they have devastating consequences. The blowout and subsequent explosions engulf the rig in flames. The fire could seemingly burn forever because of all that oil gushing onto the ship from deep below the ocean. The distance from ship to shore means that rescuers cannot get to them right away, meaning that those who survived the initial blasts, especially those who did not get to a lifeboat, remain in danger from the fire and flying debris.

Director Peter Berg’s spatial awareness of the offshore platform provides capable guidance around the disaster site and conveys the sheer size of what is above and below the water. The hellish environment blooms when the bright interiors are smeared in orange and smothered in black. Berg batters the audience with the chaos and terror that would be felt when trapped in such a situation. Screenwriters Matthew Michael Carnahan and Matthew Hand do a solid job of laying out the process that contributed to what happened. While the trauma in the moment and the reasons for it are undeniable, DEEPWATER HORIZON fails to connect on a human level.

Establishing scenes of Deepwater Horizon workers with their families and the tearful news and reunions in the aftermath are meant to provide the emotional connections in an otherwise impersonal film. These scenes simply aren’t sufficient in building vested concerns in them beyond the standard response of not wanting people to be horribly killed. DEEPWATER HORIZON doesn’t spare BP for its contributing role to the disaster, but the cartoonishly villainous Malkovich performance jerks the film out of the realistic depiction Berg sets out to achieve.