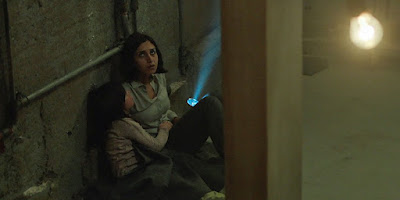 Life in post-revolutionary Iran for Shideh (Narges Rashidi) delivers one reminder after another of her vulnerability in UNDER THE SHADOW. Shideh’s political activities as a student during the revolution are held against her when she wants to return to school to become a doctor. The ongoing Iran-Iraq war takes her physician husband Iraj (Bobby Naderi) to a battle zone as part of his governmentally required service. Iraj suggests she take their daughter Dorsa (Avin Manshadi) from Tehran to the less attacked city where his parents live, but they have made her feel like she isn’t capable of caring for her child, so leaving is out of the question in her mind.

The constant threat of an air raid is always in the background. When a missile strikes her apartment building and leaves a big crack in the ceiling, the recognized danger of the circumstances becomes even more apparent. Watching over her daughter grows more stressful. Dorsa fears the djinn, or a demon-like spirit, that a mute neighbor boy tells her about. She falls ill after the apartment is hit and seemingly will not recover. Dorsa is also inconsolable over the loss of her doll, which, if the folktales are to be believed, the djinn has taken and is using to attach itself to her. Shideh dismisses talk of spirits as superstition, but as the girl’s behavior becomes stranger and she herself starts to believe she is seeing and hearing things, the easier it is to think that something supernatural endangers them too.

UNDER THE SHADOW is keenly attuned to civilian life under a restrictive regime and the terror of wartime. Writer-director Babak Anvari uses the horror filter to examine the psychological effects of having limited freedom and enduring years of bombing campaigns. Shideh has a comparatively privileged existence, yet, like all other women, she cannot go outside with her head uncovered and must hide the illegal VCR in their home that she uses to work out to bootleg Jane Fonda exercise videos. Her social position and the vigilance she must practice takes such a toll on her that it becomes the new normal like the routine of taping the windows to protect from the shattered glass if their building is bombed. Whether the djinn is imagined or not, she is right to fear the intangible forces controlling aspects of her life as a woman.

Although not subtle thematically, UNDER THE SHADOW is more judicious in how it produces scares familiar to genre filmmaking. The djinn is seen sparingly, with Anvari wringing a lot of tension out of something as mundane as Shideh looking out a window or taping a crack. The fright arises from uncertainty. That extends to Shideh’s feelings of inadequacy as a mother. Like THE BABADOOK, the film delves into what it is like to deal with the sense of not being able to keep a child from harm when the expectations to do so rest with you. UNDER THE SHADOW’s directness may be somewhat too neat, but it’s effective nevertheless.