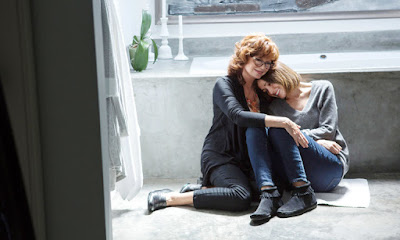 When her husband dies, it’s only natural that Marnie Minervini (Susan Sarandon) moves from New Jersey to Los Angeles to be closer to her television writer daughter Lori (Rose Byrne) in THE MEDDLER. Lori loves her mother, but she cannot take the constant calls and texts from her, not to mention when she drops by the house and lets herself in. Marnie means well, and although she wouldn’t admit it, she’s still grieving for her husband two years later. Nevertheless, Lori finds some relief in going to New York City to shoot a pilot and leaving her mother behind.

In her daughter’s absence Marnie lavishes her attention on almost anyone. Among other things, she volunteers at the hospital, babysits for Lori’s friends, and drives an Apple Genius bar employee to night classes and helps him study. There doesn’t appear to be room for another man in her life, yet she is gradually won over by Zipper (J.K. Simmons), a retired cop turned movie set security guard.

Lorene Scafaria writes and directs with great sensitivity and humor about the complications of love in various forms. THE MEDDLER deals with the loneliness of losing a spouse and parent and the tension found when the need to be close to a loved one can be the very thing that pushes her away. Although the film has autobiographical aspects, Scafaria pinpoints the general frustration that can exist between an adult child and parent when the latter has trouble giving space. The strain between Marnie and Lori is borne out of love. Scafaria empathizes with each as they engage in a delicate dance to stake out their own territory without stepping on each others’ toes. They need each other in the worst way but just haven’t been able to establish boundaries.

Sarandon projects such warmth as Marnie that it’s easy to see why she would be so wonderful and, at times, maddening as a mother. She means well to a fault and is so obviously fond of Lori that being the object of her affection is like being smothered in hugs. Marnie can be a bit of a snoop, but Sarandon plays her free of malicious or guilt-inducing intent. Her identity seems to have flowed from being a wife and a mother, so with one of those parts of her missing, she puts all her energy into the other. Marnie is selfless to a point that can be problematic, at least in how she compensates for the things she feels she doesn’t deserve. For the most part she’s not self-conscious, so it’s fun to see her interact with Zipper, whose non-threatening nature disarms her in a way that causes some necessary but unwelcome self-examination.

Like Scafaria’s excellent first film SEEKING A FRIEND FOR THE END OF THE WORLD, THE MEDDLER is based in sadness but isn’t so depressed that it can’t laugh at what life brings along. She sees what can be funny about being spotted by your ex on Valentine’s Day while having dinner with your mom, saying the right words without the proper context to a TSA agent, and disposing of a loved one’s ashes. THE MEDDLER charms not through force but by possessing a good heart.