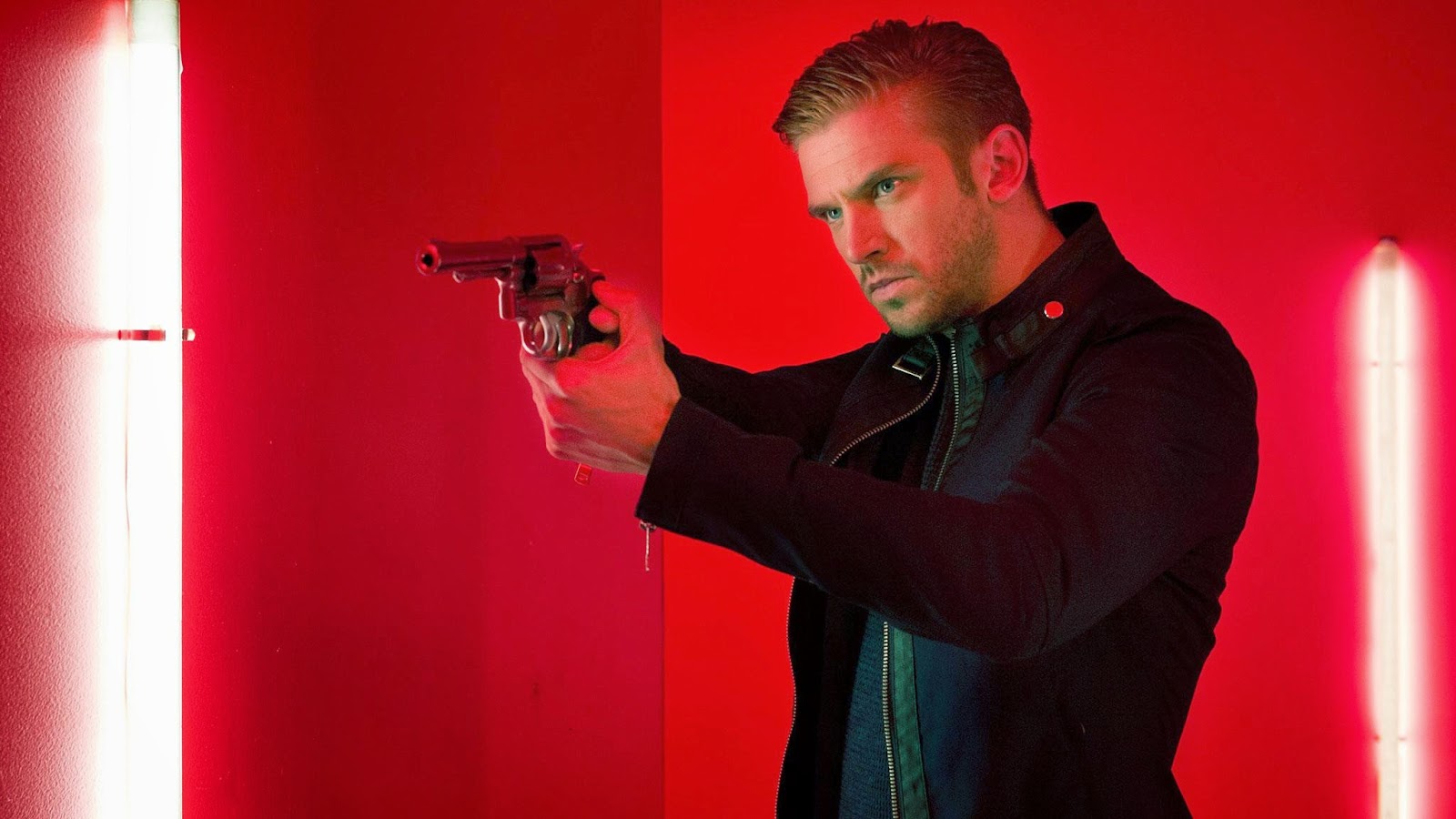 The Peterson household is still reeling from the death of their enlisted son Caleb when David (Dan Stevens) turns up at their door out of the blue in THE GUEST. He tells Laura (Sheila Kelley) that he and Caleb were good friends. Now that he’s been discharged from the army David is checking on the Petersons to fulfill the request his deceased fellow soldier made. Laura invites David to stay with the family for the time being and allows him to stay in Caleb’s untouched room.

David’s presence in their home becomes therapeutic for each of the family members. Laura’s husband (Leland Orser) can knock back beers with him and rant about how he’s been passed over at work. The Petersons’ 20-year-old daughter Anna (Maika Monroe) entertains the notion of him as a mature boyfriend to move onto while their son Luke (Brendan Meyer) finds a protective big brother who will defend him from the bullies at high school. Still, there’s something off about the unfailingly polite and even-tempered David.

Director Adam Wingard uses triangles as a visual motif in THE GUEST, suggesting that there are two people or sides fighting for the same thing. In this case David is defending a family in mourning and possibly all of those who have lost or could lose loved ones in military service, but his specific motivations and who he’s resisting are unclear for a substantial amount of the film. When the primary mystery is dropped, it still leaves more questions than answers. The lack of details is only an issue in terms of the social commentary, which seems integrated in a slapdash manner. Otherwise Wingard and screenwriter Simon Barrett milk David’s unpredictability and the expectations surrounding his character type from other movies for tension and humor.

With David’s cool exterior, there’s the prevailing anticipation for him to snap. Shots of him alone staring dead-eyed at nothing certainly support the suspicion that all is not as well as he tries to make it seem. Steve Moore’s synthesizer score reflects David’s mental state in its control. The skittering notes suggest a mind in a constant state of calculation while maintaining the appearance of composure. Stevens is playing a familiar outsider role, the tough guy with an unknown background, and Wingard and Barrett have him toy with the preconceptions audiences bring. When David is using a knife around the house and calling out a guy at a party who says he supports the troops, Stevens wears an air of danger about him, perhaps even more when he’s messing with someone. To some extent Stevens is giving a comedic performance. His embodiment of a ruthless killer is often arch. The hilarious thumbs up that he gives, while possibly a reference to TERMINATOR 2: JUDGEMENT DAY, encapsulates the funny sensibility riding shotgun in this thriller.

THE GUEST isn’t entirely satisfying in telling a story but makes up for some narrative shortcomings by virtue of delivering well-crafted genre cinema. The climactic sequence inside and outside of a maze for the Halloween dance mixes anxiety and laughs in nearly equal measures. The exclaimed ending stresses that it is not to be taken too seriously. It may not provide a conventional sense of closure, but THE GUEST strives for good, bloody fun while being sure not to overstay its welcome.