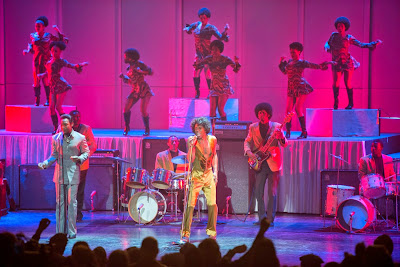 Like many other biopics GET ON UP assembles the highlights from its subject’s life, but in a twist, this film about James Brown (Chadwick Boseman) shuffles the chronology of key events. Screenwriters Jez and John-Henry Butterworth keep the story from settling into a predictable rise-and-fall rut, but their structure also resists picking up any dramatic momentum. It’s like a greatest hits CD that’s not sequenced according to when the songs were released or any logical order. It permits making connections across decades that might not have seemed apparent otherwise, but the groove struggles to be sustained from track to track.

GET ON UP tracks the life of the influential singer from his childhood in Augusta, Georgia. First his mother (Viola Davis) abandons him, and then his father (Lennie James) takes off, leaving him at the whorehouse Aunt Honey (Octavia Spencer) operates. While in prison at age 17 for stealing a suit out of a car, he meets Bobby Byrd (Nelsan Ellis), who’s performing for the inmates with his gospel group. Bobby’s parents help James get out by giving him an address to call home.

James joins Bobby’s group and gradually takes over as the star attraction of what comes to be known as The Famous Flames. They play on the chitlin’ circuit and attract the interest of a record company in Cincinnati. In their end they really just want James. He tries to keep the rest of the band as salaried employees, but the news doesn’t sit well with them, although Bobby continues to work with James during his lengthy career.

Early in GET ON UP Brown is wielding a shotgun and putting the fear of God in a group meeting at his strip mall in 1988. One of them used his private restroom, and he’s not happy about it one bit. When a woman fesses up to being the guilty party, he tells her, “You did right by yourself. There ain’t no other way to live.” It’s the defining statement in a film that shows Brown always looking out for number one, often to the detriment of the people around him. He fines band members for infractions and does not take kindly to being challenged. He pushes back against the concert promotion system so that he can keep more of the gate. James Brown’s early years did not feature anyone who put him first, which explains why he came to prioritize his interests to a fault as a guiding principle, yet the tragedy of his success by these means also led him to a lonely place even if surrounded by people.

The plentiful musical performance scenes keep the proceedings lively. Boseman brings swagger, charisma, and toughness in a magnetic piece of acting as the soul singer. Playing a well-known individual, especially one with a larger than life personality, runs the risk of mimicry, but Boseman brings the human dimension to the legend, thus avoiding merely imitating his moves and voice like a sketch comedian.

Revisiting such a broad portion of Brown’s life makes it impossible to cover everything. The unseemlier parts of his history and legal tangles are given short shrift, most notably. GET ON UP does a fine job of reminding how influential Brown has been on popular music, but in trying to understand the man it comes across like a radio edit: safe for mass consumption.