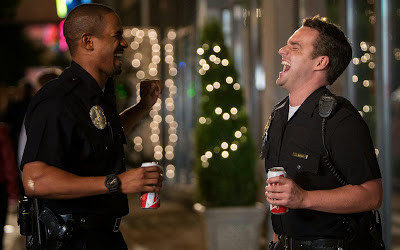 Let’s be honest. It’s unfair for a policeman’s killing of Michael Brown and the subsequent protests to be in mind while watching LET’S BE COPS despite the studio having the bad luck for the release date to coincide with what’s been happening in Ferguson, Missouri. This broad comedy aspires to capitalize on the success of 21 JUMP STREET and its sequel in having goof-ups bumble through confrontations with bad guys. Current events notwithstanding, it may have been a miscalculation to base jokes on abusing the power of the badge.

After graduating from Purdue longtime friends Ryan (Jake Johnson) and Justin (Damon Wayans Jr.) moved to Los Angeles with dreams of making it big. Now thirty years-old and still floundering they must consider that maybe it’s time to move back home to Columbus, Ohio. Ryan doesn’t seem to do anything in particular other than holding onto the anger that an injury cheated him out of a professional football career. Justin is gainfully employed as an assistant at a video game company, but when his pitch for a policeman game gets dismissed outright, he questions whether his time there is finished.

Attending a college alumni party confirms their feelings of being washed up. To make matters worse, they mistake the masquerade for a costume party and come dressed as police officers. While still in the uniforms as they walk home dejected, Ryan and Justin discover that people think they are real cops. They have some fun for the night pretending to be lawmen and even manage to do some good when interrupting mobsters shaking down the owners of a local restaurant.

What was supposed to be just one night of them playing policemen gives Ryan a tremendous rush and purpose in life. He buys a car and dresses it up to pass for an official law enforcement vehicle. He studies YouTube videos to learn the lingo and becomes obsessed with bringing brutal mob leader Mossi Kasic (James D’Arcy) to justice. Although Justin is reluctant to continue the charade, he goes along with Ryan’s scheme.

NEW GIRL co-stars Johnson and Wayans play variations on their wayward sitcom characters, making Ryan and Justin lovable losers as long as they are busting on each other or demonstrating how out of their element they are as cops. Their best comedic moments utilize the actors’ chemistry and characters’ ineptitude, such as their exaggerated reading of a text conversation with the aim of subduing squabbling sorority sisters. LET’S BE COPS offers likable leads in a middling comedy as long as it sticks to handling nuisances and minor incidents.

The film gets off track rather severely when it begins treating Ryan and Justin as though they are real law enforcers. Ryan becomes fixated on cracking an organized crime ring and gets drunk on the authority he forgets he doesn’t really have, yet LET’S BE COPS treats his conduct as a cute affectation than pathological behavior. The tone flips from silly to serious as the film gets invested in solving the case. The climactic scene takes on the perspective of a first-person shooter game not unlike something Justin wanted to create at his day job. As procedural and action elements overtake LET’S BE COPS, the comedy either becomes a secondary concern or acquires uncomfortable qualities. Someone going on a power trip while donning police blues isn’t harmless in any scenario, but it can be funny when the character is blundering through the situations. LET’S BE COPS loses sight of this crucial distinction.