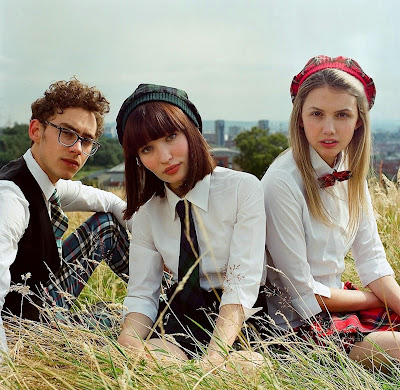 In “Act of the Apostle”, the song that leads off GOD HELP THE GIRL, Eve (Emily Browning) proclaims a transistor radio to be her Damascan road. On her journey she tunes the receiver to pick up airwaves playing pop music that reveals the design for her life, an experience she likens to the conversion of the Apostle Paul. Eve’s revelation of finding purpose and meaning in the hits of yesterday and today might sound laughable, but wouldn’t it follow that God reaches individuals where they are most likely to be receptive to the message sent?

Eve is in dire need of help, so she would be wise to find answers where she can get them. As the film begins she sneaks out of a psychiatric hospital to see bands play in a Glasgow club. After the show she meets James (Olly Alexander), whose set unceremoniously ended when he and his drummer got into a scuffle on stage. Eve needs some time to get her life a bit more in order, and when she does, James gladly provides a place for her to stay as she continues to work on overcoming her eating disorder and anxiety. Writing songs is therapeutic to Eve, so she forms a pop band with James and new friend Cass (Hannah Murray).

GOD HELP THE GIRL first emerged as a 2009 concept album written and produced by Stuart Murdoch of the Scottish indie pop group Belle and Sebastian. Musically and lyrically the project is similar to the output of his band with the exception of this material being tailored for female singers. Like a spoonful of sugar administered with medicine, the catchy, upbeat music often serves as counterpoint to the soul-searching, fear, and bitterness his twee narrators express. As writer-director of the film Murdoch employs a similar approach--and one reminiscent of Jacques Demy--by hiding this tale of depression inside a frequently colorful and energetic musical.

Murdoch exhibits a tendency to shoot the song performances as literal illustrations of his lyrics. This underlining of the text is reminiscent of early music videos and probably indicative of a first-time filmmaker wrangling an ambitious, decade-in-the-works project, but the musical scenes are consistently delightful despite the obvious visual strategy. As a songwriter Murdoch excels at telling stories in a few minutes, so it’s no surprise that the infectious songs often do a better job of pushing along the loose narrative than the dramatic scenes bridging them. For all of GOD HELP THE GIRL’s earnestness, Murdoch inserts Richard Lester-like playfulness into the action and displays humorous self-awareness about how precious his work can be. Before James and his drummer tussle, they make a point to remove their glasses, which reads as such a spot-on touch for these unthreatening guys. Of course Eve, James, and Cass aren’t just forming a band but “an autumnal recording project”.

Although set in the present day, GOD HELP THE GIRL exists out of time. 1960s flourishes run rampant through the film’s style. Browning’s look recalls French New Wave icon Anna Karina, and the folk-pop echoes another era’s simpler, more direct production. While these editorial choices may just be a reflection of Murdoch’s preoccupations, they complement the emotional distance his characters feel at this time and place. Sometimes turning to the art and passed-down wisdom of the past is the only way to make sense of what’s happening here and now.