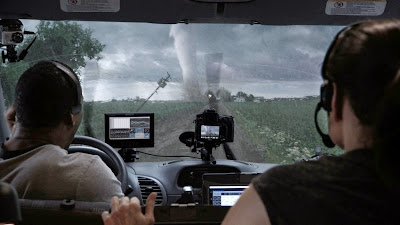 Considering the legal hedging corporations take to avoid culpability, it is a little surprising that the disaster film INTO THE STORM doesn’t come with a disclaimer that viewers should not try at home what they see on screen. It should be self-evident that running toward a tornado or standing outside watching it approach is not the smartest thing in the world to do. Then again, the film’s heartland residents and five-person documentary team chasing tornadoes certainly know better but don’t exactly exercise much caution.

The film crew led by Pete (Matt Walsh) is feeling the pressure of not coming through with the kind of footage that will keep their project afloat. In fact, it’s been a year since they shot a tornado. After missing another one, which Pete blames on meteorologist Allison (Sarah Wayne Callies), they get their funding pulled. A storm front in the region brings the possibility of capturing video, so they point their support van and armored car toward Silverton, Oklahoma with the hope of salvaging something from all this time on the road.

In Silverton high school vice-principal Gary Morris (Richard Armitage) is focused on getting through the outdoors commencement before the impending storm arrives. His sons Donnie (Max Deacon) and Trey (Nathan Kress) are supposed to be recording video time capsules and the ceremony, but Donnie takes off to help his crush Kaitlyn (Alycia Debnam Carey) reshoot her submission for a summer apprenticeship. They’re at an abandoned paper mill when the storm makes its way to town. Meanwhile aspiring viral video stars Donk (Kyle Davis) and Reevis (Jon Reep) chase twisters with no regard for their own safety.

Natural disasters are the true stars of films like INTO THE STORM, and these CGI weather events do not disappoint. To avoid all of the regular but numerous spouts becoming routine, one tornado even catches on fire. From the safety of a theater seat the storm scenes give the experience of enduring these deadly funnels in all their snarling fury. The sound design roars with the winds’ brute force to create a terrifying atmosphere. The amusement park ride nature of the storm scenes is at its best when viewing the tornado from inside a car tossed to the peaceful top of the eye and plummeting to the earth.

Awesome destruction is the attraction of INTO THE STORM, but the film doesn’t ignore the catastrophic results. While on-screen deaths are kept to a minimum, impressive scenes of the aftermath drive home the enormous amount of trauma a tornado can cause in a community, even if it’s just to property. The redneck daredevils work at cross purposes to the fearful respect INTO THE STORM holds for tornadoes, but their injections of comic relief take up a comparatively small amount of time.

As good as the action scenes are, the character-driven moments drag down INTO THE STORM. Too little development takes place for any of their stories during this hellish day to make an impact. The stupidity with which most of them act doesn’t do them any favors either. Being in Tornado Alley, you’d think they might behave more logically than if they were somewhere unaccustomed to such phenomena. INTO THE STORM is ostensibly the film that results from this incident, but instead of the survivors talking about seizing the day, maybe they should have emphasized taking National Weather Service warnings seriously.