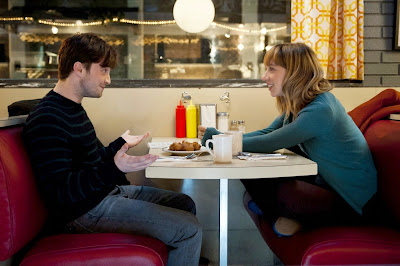 In WHAT IF medical school dropout Wallace (Daniel Radcliffe) is still brooding over the break-up of his last relationship more than a year ago when he meets animator Chantry (Zoe Kazan) at a party thrown by his college roommate and her cousin Allan (Adam Driver). Wallace and Chantry hit it off immediately, but after accompanying her home and getting her number, he learns that she has a longtime boyfriend. Although Wallace says that he’s happy to be friends, this bit of news kills his desire to contact her again.

After running into each other alone after a movie they talk some more and decide that they can have a relationship without romance entering into the equation. The situation becomes more complicated when Ben (Rafe Spall), her boyfriend of five years, gets a job opportunity that requires him to move from Toronto to Dublin for six months minimum. While Ben is in Ireland, Wallace and Chantry build a closer friendship. Although nothing untoward happens between them to jeopardize what she has with Ben, Chantry’s loneliness and Wallace’s unspoken attraction to her complicate their interactions. Making things even messier, Chantry’s sister Dalia (Megan Park) has her eyes on Wallace.

WHAT IF bears some natural comparisons to WHEN HARRY MET SALLY, but the the issue here is less a question of if men and women can just be friends but how to be friends when romantic love is felt but must be suppressed. Wallace and Chantry are two fundamentally decent and compatible people who, in different circumstances, may have become a happy couple in no time flat. As it stands their timing is inopportune with Chantry committed to her boyfriend and Wallace adamant about not scheming to split them up. Relationships are challenging enough to maintain without contriving excuses to test them. WHAT IF generally resists such romantic comedy machinations, although when it succumbs, the developments and actions appear mostly true to the characters.

Whether Radcliffe and Kazan are spending time together on screen or hashing out their problems separately, they’re a joy to be around. Obviously the film has designs on uniting them in the end, but even if romance is not in the cards, their friendship has a nice, relaxed feel to it in spite of what either one may be dealing with internally. As far as that goes, director Michael Dowse also gets friends and siblings in WHAT IF to treat one another with ease, familiarity, and love. The performances speak of characters who know and care deeply for each other, and this goes a long way in selling their behaviors and decisions.

Kazan gets the best part in WHAT IF because her character has more to process. What Chantry feels evolves according to the conditions she encounters, and Kazan softly but assertively expresses the conflict and loss she feels being suspended in relationship limbo. By finding the happy middle between impossibly sensitive doormat and hormonally raging bro Radcliffe plays the regular guy with charisma. Elan Mastai’s screenplay, based on a play by T.J. Dawe and Michael Rinaldi, teases out how people can make things more difficult for themselves with a great deal of sympathy. Whether they act on it or not, Wallace and Chantry recognize that they’ve found the complete package in one another. WHAT IF demonstrates that a romantic comedy can have it all too. It’s a funny, moving, and smart film.