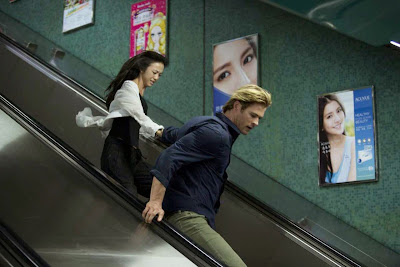 The idea that the world today is smaller than before and continues to shrink is not exactly new, but BLACKHAT considers the increasing fluidity with which borders can be breached regardless of the surveillance mechanisms in place. Battles can be waged from a distance and possibly without notice until it is too late. Measures intended to enhance security are also vulnerable to being exploited for the gain of those with the expertise and access, whether approved or ill-gotten. Obviously physical warfronts still exist, but the zones capable of causing quick, anonymous, and massive destruction lie in the connections among computers and those who best know how to travel and control the cyber realm.

When a hacker uses a Remote Access Tool to cause a nuclear reactor failure in China and mess with the soy market in the United States, officials in both countries are eager to locate whoever is responsible. That no one claims credit or makes demands is most distressing to both superpowers. Although the Americans are wary about what information they share with the Chinese, they need to combine forces to find their elusive enemy. FBI agent Carol Barrett (Viola Davis) and Captain Chen Dawai (Wang Leehom) from China’s cyber defense division, accompanied by his computer expert sister Chen Lien (Tang Wei), are working together when Dawai observes that the hacker used old code he wrote with his roommate at MIT. He insists that if they are to find their antagonist, they need to have his old friend, Nicholas Hathaway (Chris Hemsworth), on their team.

Getting Hathaway onboard is more difficult than clearing a low administrative hurdle, though. He is currently serving fifteen years as a convicted hacker. For his participation Hathaway demands no less than a commutation of his sentence if he succeeds. Failure will find him back in his cell serving the remainder of his time. Hathaway’s exemplary skill set secures his temporary release, although it comes with a monitoring bracelet and FBI watcher. It isn’t long before he susses out some clues about who they seek, but Hathaway and crew always seem to be slightly behind those they are pursuing, even as their search extends to various spots in Asia.

Director Michael Mann depicts modern skylines like circuit boards with jutting buildings as the internal components of a much larger machine we live and work inside. Cinematographer Stuart Dryburgh lights this world so that surfaces give little weight to BLACKHAT’s digitally captured images. Through the visual design reality itself seems more ephemeral, like a blurry flow of zeroes and ones. Technology has liberated the camera to go virtually anywhere, and CGI animation can render what the lens may not see, as in the early tracking of a virus through linked computers like the combustion process followed inside the engine in THE FAST AND THE FURIOUS films. While BLACKHAT is not alarmist about the ease of movement through the electronic landscape, it examines how the lack of the material fosters amorality. The simple press of a button can wreak untold consequences thousands of miles away whereas greater proximity and more direct involvement breed closer scrutiny.

Morgan Davis Foehl’s screenplay doesn’t hold the viewer’s hand through this global thriller, and the leanly edited film makes every shot purposeful. In that way it is akin to reading lines of code to comprehend how everything connects. Mann shows himself not to be a chilly technician, though, but a craftsman attuned to spotting the sensual within a data overload. When Hathaway is on the tarmac after his prison release, the space stretching around him appears limitless and overwhelming, yet it’s a light touch on the arm that helps him reorient to his surroundings. Ultimately it’s that desire to find one’s grounding amid the noise that BLACKHAT has most in mind.